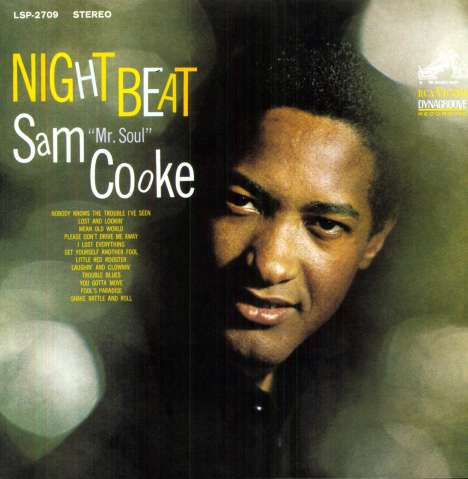 After Sam Cookes untimely death in 1964 there was a lot of arguing about the rights of his recordings, resulting in many of the songs from the latter half of his career remaining unreleased or unre-issued until the mid-eighties and early nineties.

And now, for the first time in almost forty years, Music On Vinyl is re-issuing one of the artists most critically acclaimed albums on 180 grams audiophile vinyl. Sam Cooke, inventor and true King of Soul, recorded Night Beat in 1963, an album that was more bluesy and moodier than we had seen before from Cooke. But thanks to his transcendent voice were never sad when we listen to this album. Melancholy and nostalgia might rear their heads, but there is an uplifting quality to Sam Cooke that has never been surpassed. Night Beat is an album that approaches the music at a slow pace but is never lazy. It is easy-going without losing its keen sensibilities. Sam Cooke is delicately framed by his other musicians, barely needing any accompaniment on Lost And Lookin and Trouble Blues, while adding some honest grittiness to Little Red Rooster and I Lost Everything. Had Sam Cooke lived longer, we might have had more music of this rare quality. As it stands, we must make do with the treasures he left behind.