The Rolling Stones: It's Only Rock'n'Roll (2009 Remastered) 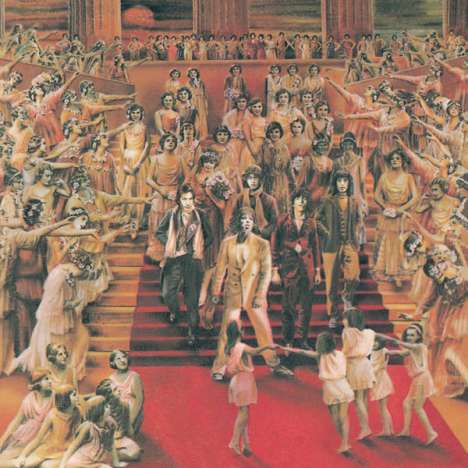 Weitere Ausgaben von It's Only Rock'n'Roll

The Rolling Stones' twelfth studio album saw Mick Taylor leave, and Ronnie Wood arrive, bringing with him the classic, blended guitar rock sound that has typified the band ever since.

The Rolling Stones are in no danger of being charged under the Trade Descriptions Act for It's Only Rock 'N' Roll. Whether they're attacking Motown R'n'B soul standard Ain't Too Proud To Beg - a ritual slaughter on the altar of Rock 'n' Roll - or dropping into wistful balladry as on Till The Next Goodbye, there's a more consistent rock sensibility at work on this album that leads each song consistently to the same place.

It's not a new sound, but this is the first album on which every track, in one way or another, has it; and as such, It's Only Rock 'N' Roll marks an end and a beginning.

There is still room for depth on the record. Bill Janovitz has pointed out the layered complexity of the lyrics on Till The Next Goodbye, while the most atypical number here, Time Waits For No One, although it takes flight on the back of a soaring, extended Mick Taylor solo, still ends up being pumped up and whipped through towards its conclusion by some typically driving R 'n' B drums and piano. (The song is probably the album standout, and the solo is a masterpiece - ironically enough, since this was also the track - which didn't credit him as a composer - that convinced Mick Taylor that he didn't have time to wait for the band to recognise his contribution, prompting his recognition.)

The fact is, two out of three opening tracks entitled If You Can't Rock Me and It's Only Rock 'N' Roll (But I Like It) on an album called It's Only Rock 'N' Roll kind of set an agenda and expectations. After the abstractions of a record called Goats Head Soup (opening tracks Dancing With Mr D, 100 Years Ago and Coming Down Again), this is straightforward stuff: shitkicking, good time R’n’B/boogie-woogie dance music, with some spoonfuls of blues, country and gospel stirred in; the whole mixture coming in more audible than ever before due to better studio technology, particularly the guitar sound, showing how closely related to and influential upon the hard rock genre The Rolling Stones were, and still are at this point.

There’s a pinch of reggae in this mix too. It's hard to keep an entirely straight face during Luxury; the combination of a reggae hook superimposed over the standard rock beat that dominates the album; the lyrics 'I'm working so hard, workin for de company'; the faux-Jamaican accent in which they are sung; not being conducive to po-faced rock criticism. It's a cracking song, mind, with wicked piano once again by the irrperessible genius called Nicky Hopkins - a great party record.

Short and Curlies also prompts a smile of agreeable, toe-tapping enjoyment. It's a thumping song, full of thumping beats and groovy licks, and completely devoid of menace. "You can't get away from it all - she's got you by the balls," cries Mick, "It's too bad, so sad!" - sounding anything but upset about it.

What these tracks have in common with Time Waits For No One, Till The Next Time We Say Goodbye, and everything else on It's Only Rock 'N' Roll, is that by the end of the song, no matter how they approach it, they all end up rocking out, with guitars and drums kicking the rhythm and the melody into the genre The Rolling Stones here successfully claim as their own.

The closest thing to exceptions are If You Really Want To Be My Friend: a sincere gospel-blues with some beautiful organ on which Nicky Hopkins sounds more like Billy Preston than Billy Preston; and Fingerprint File, an extended paranoid funk rock jam, where Billy Preston sounds pretty much like himself; but even on this latter number there's a sense of suppressed comedy in the hammed-up fade-out vocals: "Good night, sleep tight."

But the key songs that set the tone and standardise around a Rolling Stones that persists today are If You Can't Rock Me, the title track, and Dance Little Sister.

This record, timeless and still amazingly listenable, contemporary even, is an admission not of defeat, but of acceptance: that, after some extremely strange and very high adventures, The Rolling Stones have come home, found their feet after time in space, and are going to stick with what they know, love and do better than anyone else.

It's only rock and roll, but they like it, and there's absolutely nothing wrong with that.