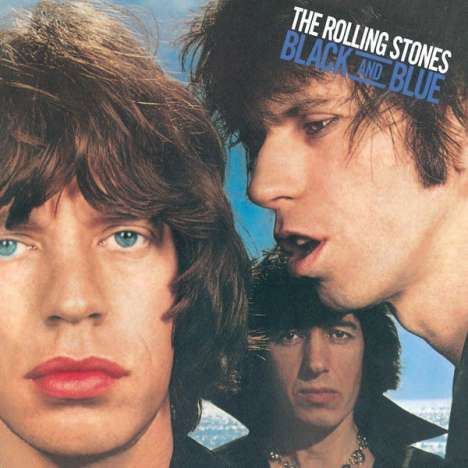 The Rolling Stones' 13th studio album was released in 1976, after being recorded mainly at Musicland Studios in Germany, and in Rotterdam, Netherlands. It's not considered a Stones classic; but that doesn't mean it's not worth listening to.

1976 is a very long time ago and the world was a very different place then. They did things differently there. For example, Black And Blue was originally launched in American with a huge billboard on Sunset Boulevard that showed the model Anita Russell bruised and bound by Mick Jagger, accompanied by the phrase, “I'm Black And Blue from the Rolling Stones — and I love it!”

Mick thought it was ‘a valid piece of commercial art, just a picture’ and Keith claimed that it was ‘funny’; but various feminist groups weren’t quite so sure and protested until it was removed.

In 1976 you could also, quite legitimately, get Billy Preston into the studio to play on Eric Donaldson’s Cherry Oh Baby, and then sing in a cod-Jamaican accent all over it. No one would think badly of you, except, perhaps, rock critic extraordinaire Lester Bangs who decreed Black And Blue was, “a letdown of hideous proportions” and “the first meaningless Rolling Stones album.”

But that seems to miss the point somewhat because Black And Blue, perhaps more than any other Rolling Stones to date, was all about the medium rather than the message. It’s a good example of the old ‘Dancing about Architecture’ problem - there is nothing the music says that can usefully be put into words. This record is a triumph of sensation over meaning. So tune your ears in, but turn your brain off for a while, you won’t be needing it.

Take Black And Blue’s final track, Crazy Mama. There is no point in looking for some hidden significance here – in fact, the idea is pleasantly amusing. Take a listen and you’ll hear why. How could there be anything more to this straightforward rocker than Charlie’s and Bill’s pots and pans groove, the wall of full-throated backing vocals and Woods’ and Richards’ paint-peeling guitar figures?

The songs do tell stories but that’s not what makes the songs work. Example: Hand Of Fate relishes the lines, “Yeah and I watched him die, yeah, watch out boy, I watched him die, woah!” before feeding back into a startling guitar solo far more eloquent than the pick ‘n’ mix outlaw song lyrics.

Then there’s Hey Negrita, a living jam session which transports you to Munich’s Musicland Studios and puts you flat on your back on a long leather sofa. There’s Preston again, loosening up with a string of pearly piano shapes. “I need money,” Jagger sings, before offering, contemptuously, “my sweet ass…” Charles Shaar Murray, reviewing the record in 1976 (and also demonstrating that the musical press also did things very differently 30-something years ago) had this to say: “The song ain't no Nobel Prizewinner, but it's just solid enough to give the riff an excuse for living and the chorus vocals (by Jagger, Richard, Preston and Wood) have a nicely sassy urgency.” Good enough. And why not?

The record actually begins with a rigid disco groove. Hot Stuff goes for boiling dance floor pressure, comes up a bit short, falls a bit flat, and settles instead for a head-nodding ultra-bump, with more of Preston’s stinging piano lines. And then, just when you think, ‘there’s no way this will break down into some clomping jazz-rock’, it does precisely that.

There are two great ballads on the album. Memory Motel (“She has a mind of her own and she uses it well…”) has Wayne Perkins and Harvey Mandel on guitars and seems to be revisiting some old Stones nostalgia. A great deal of it is about a variety of attractive women that have flitted in and out of the band’s world, but it succinctly nails the road life ennui, “On the seventh day,” Jagger sings, “my eyes were all aglaze, we'd been 10,000 miles, been in fifteen states…”

The other is, of course, the global megahit, Fool To Cry, which is powerfully corny but undeniably affecting too. It’s hard to take Jagger seriously when he sings about his woman, “on the poor part of town”, even if they do, “make lurve, so fine”, but as already noted, you have to get over trying to put any literal meaning on the things on Black And Blue if you’re going to enjoy any of them. Interestingly, Foool To Cry is a very 1980’s sounding track – that sort of spare, spacey, synthesized song that would come to dominate many of the world’s airwaves some five or more years later.

So what does our trip in the time machine that is Black And Blue teach us? Well, popular music has a tremendous capacity for being silly at the best of times – you only have to listen to the really quite bad Melody to realise that (sample: “I'm looking for her high and low/Like a mustard for a ham”).

And Black And Blue doesn’t even qualify as the best of times. Barbara Charone had clearly been at the Kool-Aid when she called it “a great record”, and Lester Bangs was probably right about this not being one of The Rolling Stones’ most significant releases.

But he’s wrong about its overall worth, and Charone got it absolutely right when she wrote in the same review, “…you're cheating them [The Rolling Stones] and yourself if you don't take time and care with Black And Blue”. Despite some ill-judged musical decisions, some very suspect lyrics and a couple of track inclusions that come perilously close to sounding like filler, the majority of the album is at least good enough – even by Rolling Stones standards, which are higher than most. So be assured: there really are some exceptional moments and even songs, here - but only for those prepared to put the time in to find them and then to listen without prejudice.