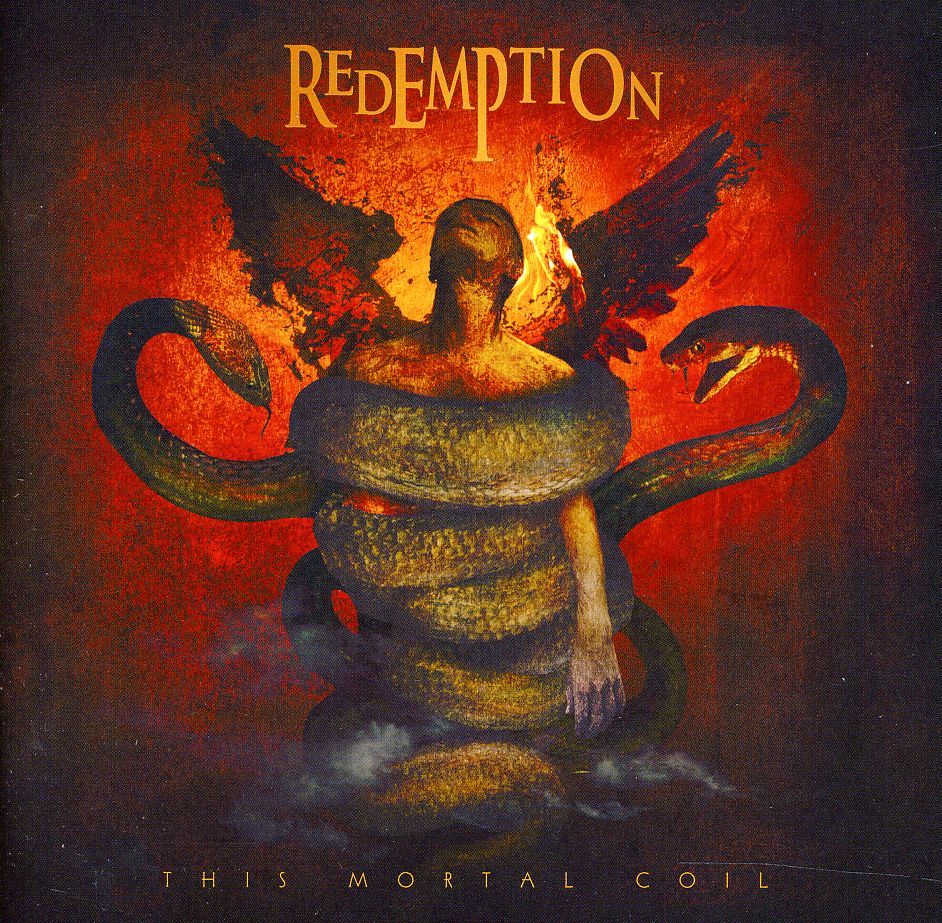 REDEMPTION guitarist / founder Nick van Dyk will be the first to tell you there’s truth in the saying that an artist’s darkest moments can offer a tremendous source of inspiration. Especially when faced with a death sentence. Thus, it’s no accident that the band’s fifth studio album is entitled This Mortal Coil, and is easily their most aggressive outing to date.

“I was diagnosed with blood cancer three years ago and told that I had three to five years to live,” van Dyk explained. “It’s not that I wanted to write songs or an album about having cancer, but there’s a thought process that one goes through when you’re confronted by your own mortality. It raises all kinds of questions: What the hell have I done to put myself in this position? What do I do now? How much time do I have, what can I do to change that, and what will I do with it, whether it’s a day or 50 years?”

He continues, “Now as it happens, I was fortunate to have been diagnosed by accident and as a result had the opportunity to research the one guy in the world who thinks he can cure this before having to start treatment. I went through extremely intense therapy for it, and as of now the odds are very much in my favor that I’m cured. So the cancer, hopefully, is gone – but the questions raised by the experience remain relevant to me, as they do to everybody – we all have to face our mortality eventually.”

While he is quick to say that it is not about cancer or his own situation, This Mortal Coil is, in some ways, the soundtrack to a life shaken by such a diagnosis. The song titles alone – ‘Path Of The Whirlwind’, ‘No Tickets To The Funeral’, ‘Let It Rain’, ‘Stronger Than Death’, ‘Departure Of The Pale Horse’ to name a few – are enough to paint the picture. Dig into the lyrics, which deal with personal reflection and the irony of life, and it’s clear van Dyk is channeling the emotions of his last three years through the music.

“It’s difficult to go through this without being moved by it, but I didn’t want to make a concept album about me. The goal of our music is always to connect on common ground with the listener. In the past, for example, we’ve had songs about relationships – our relationships with others, ourselves and the world around us. These are things that everyone has in common in their lives. This time, the theme is facing one’s mortality, which is something we as human beings have to do. So I’m not so much discussing my diagnosis, but making some observations about this common condition. Of course, your mileage may vary!”

Surfacing in 2003 with their self-titled debut, REDEMPTION quickly made a name for themselves, mentioned in whispers alongside the likes of Dream Theater and Symphony X as the prog metal band to watch. With the release of The Fullness Of Time two years later and Fates Warning vocalist Ray Alder as the band’s new frontman – replacing Steel Prophet singer Rick Mythiasin – REDEMPTION’s career began in earnest.

It wasn’t until the 2007 release of The Origins Of Ruin via their new worldwide label home InsideOutMusic, however, that REDEMPTION truly came into their own, establishing themselves as something far more than the stereotypical dime-a-dozen prog metal band. Snowfall On Judgment Day, issued in 2009, continued to hammer the point home that REDEMPTION had their own identity. They had no designs on becoming the next Dream Theater, who they by the way had supported earlier on a large tour across North America in 2007, leaving fans to wonder what the band would come up with next.

In other words, anything was possible.

“We’re pretty heavy for prog metal, which makes sense if you consider that I grew up on Bay Area Thrash and the New Wave Of British Heavy Metal, and only later got into bands like Kansas and Rush and Genesis,” van Dyk says of REDEMPTION’s evolution. “These are, of course, many of the same influences that Dream Theater themselves has – and as much as I love Dream Theater’s music, the fact is that a lot of our common influences had already made their mark on me and formed the core REDEMPTION sound before it became evident that sounding like Dream Theater’s particular combination of those same ingredients was considered a good thing. That’s why our music is a bit different from what’s come out of the Dream Theater-influenced über-prog movement.”

Musically, This Mortal Coil sees REDEMPTION edge back into the realms of traditional progressive metal. Fans will hear recurring passage and themes over the course of the record – all of them composed deliberately – yet the focus is still on the songs rather than showcasing the band members’ technical wizardry. Alder, meanwhile, puts in a lush performance that is simultaneously melodic and aggressive. He is instantly recognizable as the voice of Fates Warning, but shows off a much darker side of his musical personality that fits hand-in-glove with van Dyk’s vision for the album.

Bottom line: This Mortal Coil is a union of REDEMPTION’s established full-on metal direction of the last five years and the prog metal sound of their early days. The end result is a record that appeals to anyone with a mind for shred with substance, guaranteed to please diehard REDEMPTION fans and win over new ones along the way.