Luther Allison: Where Have You Been: Live in Montreux

Luther Allison
Where Have You Been: Live in Montreux
CD
CD (Compact Disc) 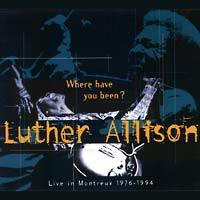 'Where have you been, LUTHER?' The answer is: 'Europe' and definitely 'working hard!'

LUTHER started working in Europe in 1976, the year Motown released his third album for the Gordy label, 'Night Life'. The very first tour began with a furious performance at the Montreux Jazz Festival, Switzerland, six tracks of which are featured on this CD set.

In 1983, LUTHER made Paris, France his home base. He quickly attained the status of a major drawing blues act on the live circuit in Europe. Subsequently, U. S. audiences (re) discovered him as one of the greatest blues talents performing today.

Because the Montreux Jazz Festival has always been a special event for LUTHER, this CD reflects the development of his band sound over the years. On the '76 and '83 sets, LUTHER used his U. S. touring band; the '84 set features the legendary Muscle Shoals Rythm Section - a special event co-produced by Jerry Wexler. In accordance with the concept of Montreux and because he's one of Montreux's favourite performers, LUTHER was repeatedly invited to jam with B. B. King ('89), John Mayall ('86) and Otis Rush ('86). The '94 set features a Memphis set-up including the Memphis Horns, paying tribute to the roots of R&B and soul music.

The 1994 release of 'Bad Love' (in Europe on RUF) 'Soul Fixin'Man' (U. S. version on Alligator) marked the start of LUTHER'S U. S. 'comeback'. It was his first studio album recorded in the U. S. since his Motown album of '76, but certainly not his only recording; a look at his discography shows that LUTHER was successfully working hard in Europe.