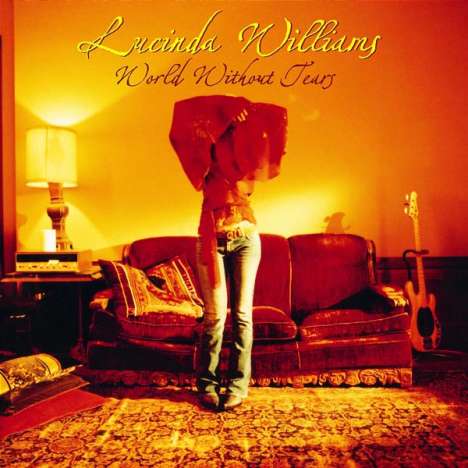 Lucinda Williams
Lu's Jukebox Vol. 6: You Are Cordially Invited...A Tribute To The Rolling Stones
2 LPs
EUR 31,99*
"I'm really excited about this record because it's different from anything I've done before," multi-Grammy-winning singer-songwriter Lucinda Williams says of her latest effort - the much-anticipated World Without Tears. "I think it shows a natural progression. Plus, it has some up-tempo stuff on it and I think it was time for me to do that."

Whether you're a Lucinda Williams fan or just discovering her infectiously captivating music for the first time, World Without Tears is an eclectic, heartstring-pulling gem that commands attention simply because it defies categorization. It's equal parts blues, folk, country and rock anchored by deeply poetic lyrics that cut right to the chase in conveying the full spectrum of the human experience and the emotions associated with it - from heartbreak, loss, betrayal and anger to desire, exhilaration and redemption.

That's always been Lucinda's strong suit. The oldest child of renowned poet Miller Williams, Lucinda recorded two acclaimed records for Smithsonian / Folkways before hitting her stride in 1988 with her self-titled debut for the Rough Trade label. Artists and music industry bigwigs took note of her songwriting prowess, and within a short time country artists Patty Loveless' and Mary-Chapin Carpenter's versions of the album's "The Night's Too Long" and "Passionate Kisses," respectively, shot right to the top of the country charts, with the latter tune garnering Lucinda a Grammy in 1992.

That same year, Lucinda released Sweet Old World, which garnered much critical acclaim and squarely placed her at the forefront of the burgeoning Americana music scene. Then in 1998 the floodgates opened with the release of the stunning, Grammy-winning Car Wheels on a Gravel Road. That was followed in 2000 with the laid-back, sensually dripping Essence - an album that prompted Time magazine to name Lucinda as "America's Best Songwriter." And now there's the genre-crossing World Without Tears.

"Each song has a different flavor, and reflects some of my influences," Lucinda says of World Without Tears. What's apparent is the record reflects a cool mix of many styles. For example, there's the raw, sexually charged, r&b tinged "Righteously" that features a searing guitar line reminiscent of Jimi Hendrix's "Third Stone from the Sun." The song "Atonement" is a sinewy, swampy, menacing ZZ Top-meets-Howlin'-Wolf jab at self-righteous bible brandishers. Then there's the very Dylan-esque, emotionally intense "Sweet Side," as well as the ripping, blistering Exile-on-Main-Street-like "Real Live Bleeding Fingers And Broken Guitar Strings."

One of the most revealing tracks on World Without Tears is the moody, Doors-flavored "American Dream," in which Lucinda weaves a chilling, harrowing, first-person narrative. "Even though, yes, it's a great country that we're living in and we have a lot of advantages, but at the same time there are problems that we need to address." Lucinda says of the tune.

In addressing the recording process of World Without Tears, Lucinda enlisted the services of Mark Howard, who's also gone behind the boards for Bob Dylan and U2. As he's done with other artists he's recorded, Mark convinced Lucinda that going for a live approach would lend the material more of a warm, intimate touch. "Everything was so spontaneous and emotional," Lucinda points out. "It was great. We recorded the album in this huge 1920s mansion right in the middle of Los Angeles. We recorded the way a live band would record." That crackerjack band consists of: Doug Pettibone on guitar; Jim Christie on drums, percussion and keyboards; and Taras Prodaniuk on bass.

One of the spontaneous moments Lucinda is referring to happened during the recording of the reflective, world-weary title track. "I showed it to the band one time, and before we had time to even think about anything too much, we sat down and did it," Lucinda recalls. "It was truly magical."

The rest of the tracks on World Without Tears. "These songs really are 'The Fruits of My Labor,' which is the title of one of the songs on the album," remarks an enthusiastic Lucinda. "It shows all the different musical influences that have entered into my life, but none of it was conscious. It just happened."

That's what makes World Without Tears so special. The mark of a true artist is to synthesize various musical elements and then create something that's so completely original. Lucinda Williams has definitely captured that spirit and sense of artistic vibrancy.

Lucinda Williams
Down Where The Spirit Meets The Bone
2 CDs
EUR 15,99*