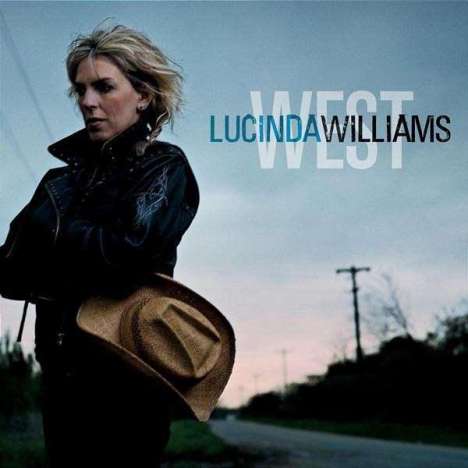 Lucinda Williams
Lu's Jukebox Vol. 3: Bob's Back Pages - A Night Of Bob Dylan Songs
CD
EUR 15,99*
It’s long been said that the blues - in all its forms - is one of the most potent means to transform pain into beauty. Lucinda Williams has known that since she began devouring music as a youngster growing up in Louisiana, and she’s been finding new ways to perform that alchemical reaction ever since.

With West, a disc that may well be Williams’ most personal work to date, the singer-songwriter channels both her emotion and restive creative energy into a startling set of songs that touch on both darkness and redemption. At turns strikingly spare and compellingly muscular, the album’s 13 cuts attest to her willingness to stretch as a musician - and to put herself on the line as a chronicler of life.

“The songs deal with a chapter in my life and they definitely tell a story,” says Williams. “It’s probably been the most prolific time in my life as a writer. I’d been through so many changes - my mother’s death and a very tumultuous relationship that ended badly - so obviously there’s a lot of pain and struggling, but it ends with a look towards the future.”

There’s no disputing the sense of struggle that imbues songs like “Fancy Funeral” - a ballad with a gentle lilt that can’t mask the disillusionment of a narrator trying to make a case for the meaninglessness of such an affair. Nor can one miss the ache in “Mama You Sweet,” a raw-but-right rumination on what remains after the loss of a loved one.

On the other hand, West is rife with songs that serve to enliven and affirm, albeit in decidedly non-Hallmark fashion. The fiery “Come On” - a kiss-off tune in the mode of Dylan’s “Positively 4th Street” - uses a stinging guitar hook to grab the listener by the lapels, all the better for Williams to deliver a knockout blow with a flurry of acerbic, double-entendre lyrics. There’s a similarly edgy vibe at play in “Wrap My Head Around That,” which stalks stealthily for nine minutes of hypnotic rhythm - goosed along by Bill Frisell’s serpentine guitar - that matches Williams’ sharp wordplay at every turn.

The envelope-pushing sonics on those songs can be attributed to Williams’ recent listening patterns - an eclectic list that includes Thievery Corporation and M. I.A in addition to The Black Keys and White Stripes - as well as the collaborative relationship she developed with the album’s co-producer, Hal Willner.

“Hal certainly had a major impact on the outcome of the sound,” says Williams. “He had a lot of ideas and he brought in certain players - Jenny Scheinman on violin, who did all the string arrangements and brought in a couple of other guys - and introduced a little sampling. I wasn’t totally familiar with Hal’s work, but I listened to Marianne Faithfull’s Strange Weather and that made me think it would probably work. That album is so derived from folk and blues roots, yet it has this very mature womanly quality to it. My goal was to make a mature yet hip album.”

Lucinda Williams has been bringing those elements together since the onset of her career, which was launched back in the early ‘80s with a pair of acclaimed albums for Smithsonian / Folkways. She honed the spartan approach established on those discs on a self-titled 1988 collection that brought her to wider attention - with listeners as well as with fellow performers like Mary Chapin Carpenter, who had a hit (and helped Lucinda win a Grammy) with the disc’s “Passionate Kisses.”

Having decided that she’d been doing “the singer-songwriter thing by default,” Williams took off in something of a new direction during the ‘90s, issuing the slow-burning Sweet Old World - a disc that, as much as any release, helped place the Americana movement at the forefront of listeners’ minds - and cementing her own spot in the cultural lexicon with 1998’s rough-hewn masterpiece Car Wheels on a Gravel Road. That disc earned Williams a Grammy as a performer, and - true to form - inspired her to shift gears again for Essence (2001), a sensual, burnished offering that prompted Time magazine to dub her “America’s Best Songwriter,” a title she upheld righteously two years later in 2003 with World Without Tears.

In recent times, Williams has broadened her palette even further through frequent collaborations with kindred spirits - acts as varied as The North Mississippi All-Stars and Flogging Molly - who share her uncommon sense of non-revivalist traditionalism. That combination of rootsiness and restlessness runs through West like a raging rapid, cutting out craggy soundscapes that beckon listeners inexorably - as on “Unsuffer Me,” perhaps the album’s most overtly bluesy offering.

“That’s very much in the tradition of the blues -- like one of those old Robert Johnson songs that deals with demons and trying to get free from them,” says Williams. “There are only so many subjects you can write about. Every song and every poem is about one of them - love, sex, death, loss, redemption."

“That’s a song of redemption - a spiritual song, to whoever your God is, whatever power it is that can come in and release your burden. In terms of searching, that’s something that’s ongoing in my life. I don’t know that I’ll ever achieve that spiritual / mental freedom as long as I am walking around on this troubled, disturbed chaotic planet that we all live on.”

That quest is at the center of each of West’s songs - and Williams’ unflagging ability to embark upon it openheartedly from so many directions lends an unambiguously timeless feel to the disc, a sense that it can be appreciated in a bucolic meadow, a darkened room or a raucous roadhouse.

“I get tired of people looking at my songs and feeling that they’re all sad and dark,” she says. “There’s more to them than that. Some people might read Flannery O’Connor and see that as simply dark, and it is dark and disturbing, but there’s a philosophical aspect, even a comical aspect to it as well. I think that’s all there on this album - it’s a full circle, like I’ve come through a metamorphosis.”