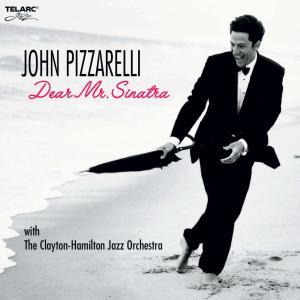 Now available in multichannel SACD as well as the CD recording! John Pizzarelli, one of the most celebrated performers bringing popular standards to a new generation, will release a very special recording on Telarc International. His new album, Dear Mr. Sinatra, pays homage to Frank Sinatra, perhaps the greatest entertainer of all time, by focusing on songs that were specifically written for “Ol’ Blue Eyes.” Early in his career, Pizzarelli opened for Sinatra on tour. His father, the jazz guitar legend Bucky Pizzarelli, played on many of Sinatra’s seminal recordings. Dear Mr. Sinatra is in many ways the most personal of all the Sinatra tributes available. The new disc, featuring The Clayton-Hamilton Jazz Orchestra, is due at retail on July 18, 2006.

Dear Mr. Sinatra, the singer and guitarist’s first-ever Sinatra album, follows Pizzarelli’s highly-acclaimed tributes to Nat “King” Cole (Dear Mr. Cole and P. S. Mr. Cole), Antonio Carlos Jobim (Bossa Nova) and The Beatles (John Pizzarelli Meets The Beatles). “Frank has always been one of my main musical influences. I love the way he transforms himself from song to song,” says Pizzarelli. “In the early 1990s, I was honored to open for him with my quartet in Europe and around the States. Frank would appear in the wings during our final number, swinging and clapping and smiling. He would come onstage and cheer for us. It was an honor to play with him, and we were thrilled he enjoyed our music.”

“We made a conscious effort to pick songs that lent themselves well to the jazz idiom,” Pizzarelli continues. “We wanted our CD to be less conventional than other Sinatra tributes. Many of the songs we chose were written for him and went on to become standards, rather than songs that he merely performed.”

Dear Mr. Sinatra is Pizzarelli’s first major recording with The Clayton-Hamilton Jazz Orchestra, even though he has known John Clayton and Jeff Hamilton for over 20 years. Fresh off the smash success of Christmas Songs, their collaboration with jazz superstar Diana Krall, The Clayton-Hamilton Jazz Orchestra’s scintillating performances and word-class arrangements add to the cohesiveness of the record.

Many selections come from the men Sinatra considered his own personal songwriters, such as “Ring-a-Ding Ding,” the rarely-recorded song by Sammy Cahn and Jimmy Van Heusen. “‘Ring-a-Ding-Ding’ was something that Frank would say all the time,” says Pizzarelli. “So he asked Sammy to write a song using the phrase. These words were just part of their vocabulary.”

This collection includes several unique performances. “Nice ‘n’ Easy,” written by Lew Spence and Alan & Marilyn Bergman, features a new set of lyrics never recorded by Sinatra or anyone else (the new lyrics will be performed by Mr. Bergman himself on an upcoming album). The classic “In the Wee Small Hours” features a special arrangement by Quincy Jones originally written for Sinatra and the Count Basie Band. They performed it for two nights in Chicago, but it was never recorded. Pizzarelli discovered the chart after legendary radio personality Jonathan Schwartz recommended it for a recent tribute to Mr. Jones.

“Witchcraft” was included after Pizzarelli heard a story about how Sinatra originally selected it. “Sinatra was over at Cy Coleman’s house listening to demo records one day,” he says. “‘What’s at the top of the pile?’ asks Frank. ‘Oh that’s nothing,’ Cy replies, ‘I have much better stuff down further.’ ‘No, no, just play the one at top of the pile.’ He discovered the now familiar song then and there, which led to the famous recording.” This arrangement was written for Pizzarelli’s big band by Don Sebesky as a nod to Coleman after the composer’s sudden passing in 2004.

Pizzarelli recorded the song “Can’t We Be Friends?” as an homage to the late guitar innovator George Van Eps. A pioneer who first invented the concept of the seven-string guitar, Van Eps played on Sinatra’s original recording of the song. Bucky Pizzarelli, who played not only with Sinatra, but with Peggy Lee, Tony Bennett and many major orchestras, takes Van Eps part on this version.

Other songs come from Pizzarelli’s favorite Sinatra records: “I See Your Face Before Me” (from In the Wee Small Hours), “You Make Me Feel So Young” (from Sinatra at the Sands), “How About You?” and “I’ve Got You Under My Skin” (from Songs For Swingin’ Lovers), “If I Had You” (from Songs from Great Britain) and “Yes Sir, That’s My Baby” (from Strangers in the Night). Dear Mr. Sinatra, recorded over three days in Los Angeles, is Pizzarelli’s seventh release for Telarc. (concordmusicgroup. com)