John Pizzarelli: With A Song In My Heart 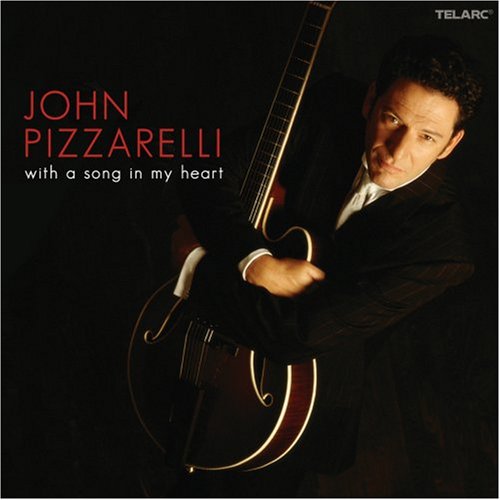 Guitarist-vocalist John Pizzarelli was still in his late teens when composer Richard Rodgers died in December 1979, but the veteran songwriter’s creative prowess was not lost on the budding young interpreter of the Great American Songbook. With a Song in My Heart: John Pizzarelli Sings the Music of Richard Rodgers (CD-83676), the latest chapter in a career that spans more than 25 years, is a tip of the Pizzarelli hat to Rodgers’ musical legacy.

Rodgers was one of the most prolific and influential figures in 20th century American music. The composer of nearly a thousand songs and forty Broadway musicals, he is best known for his creative partnerships with lyricists Lorenz Hart and Oscar Hammerstein II. In a career that spanned a half century, he won Oscar, GRAMMY, Emmy and Tony awards, as well as a Pulitzer Prize. Thirty years after his death, his music continues to appeal to a broad audience – not just in the U. S. but around the world.

“A lot of his musicals are being revived right now,” says Pizzarelli. “South Pacific is at Lincoln Center. Pal Joey is coming soon. There’s a lot of Rodgers in the air. So it was just a matter of picking songs that I liked – things that would be interesting and make a nice package.”

And as always, Pizzarelli was committed to making it swing. “I wanted it to be along the lines of the kinds of records Marty Paitch and Mel Tormé used to make,” he explains. “No real rhythm guitar to speak of, not a lot of piano. The horns sort of lead the way over the bass and the drums. That way, the piano and the guitar are more like soloists. The first call that I made was to Don Sebesky. I told him I wanted to use horns on six of the tracks. He just ate that up. He was very excited, because those Tormé records are some of his favorites.”

The set opens with the lighthearted and easygoing title track, a song from the 1929 Rodgers & Hart musical, Spring Is Here. Pizzarelli’s version is full of brassy punch, thanks to Sebesky’s tight horn arrangement. “I have a recording of Chet Baker singing this song,” says Pizzarelli. “Don arranged that recording, which is why the song appears on this record. The ensemble section after the piano solo on my record is a harmonization of Chet’s first chorus on the version from his record.”

Further in, the band takes a break, allowing Pizzarelli and his father – veteran guitarist Bucky Pizzarelli – to craft a poignant and intimate guitar / vocal version of “It’s Easy To Remember,” a Rodgers & Hart collaboration from the 1935 film, Mississippi. “Benny Goodman used to play this when my father and I opened for him when I was a kid. Benny loved this song. My father has just recently started playing it again in his show, so that’s why it’s on this record.”

“Happy Talk” from the well-known Rodgers & Hammerstein musical, South Pacific (originally staged on Broadway in 1949), fits into a decidedly Latin groove with the help of guest pianist César Camargo Mariano. “I’ve always thought of this as a bossa nova song, because it mentions the moon and the sky and the lilies on the lake – all of that typical bossa nova imagery. It almost sounds as though Jobim could have written it. I was glad to be able to do it with César, who appeared on my Bossa Nova album in 2004. He and I revisited that guitar and piano arrangement with this song.”

The stripped-down and simple closer, “You’ve Got To Be Carefully Taught” – also from South Pacific – takes a bit of a pop ballad turn, thanks in part to Pizzarelli’s re-working of the time signature from the original charts. “It was originally written in 3 / 4 time,” he says, “but we did it in 4 / 4 time. I sort of treated it as a James Taylor song.”

With a Song in My Heart combines the timelessness of Richard Rodgers’ music with John Pizzarelli’s natural intuition about the versatility of the Great American Songbook.

“I know the material is good,” says Pizzarelli. “It was just a matter of how I wanted to present the songs. We did all of our homework in a three-week period. We made a decision about the concept, we got the best people we could find and we recorded the album in two days. Everyone was on their game. It couldn’t have gone better.” (concordmusicgroup. com)