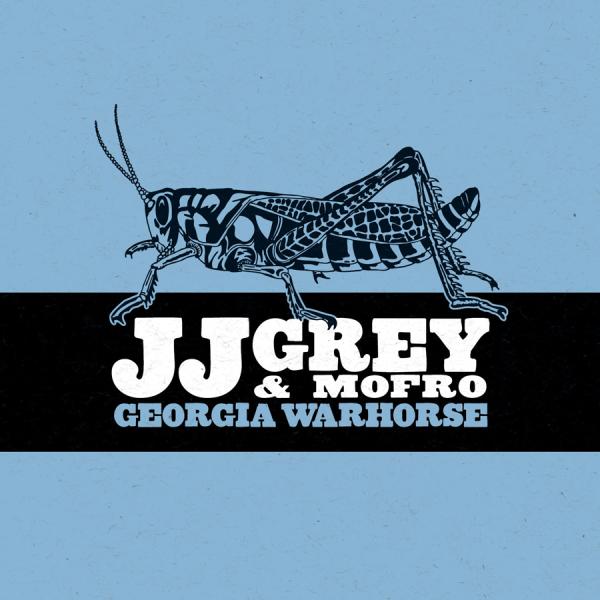 2010 sees the Alligator Records release of Grey’s latest labor of love, Georgia Warhorse, named after the resilient Southern lubber grasshopper. “Yellow and black, and tough like an old-school Tonka toy,” says JJ. “They seem so at ease with the world. Nothing seems to rile them. They’re in no hurry but they have a kind of resilience because they just keep coming back and I’ve always felt there was a lesson in there for me to learn.” Grey could be described in such words; his own career has grown over the course of a decade of winning over fans night after night.

As with the previous releases, Grey meticulously demoed the entire Georgia Warhorse album himself on the various instruments in his own home studio he calls the Egg Room. “It’s named after the old refrigerator room we used to keep eggs in when my grandparents were in the egg business,” says Grey. “Once I’m done with the demos then I start thinking about hitting the real studio.” Armed with eleven new original songs including one co-written with songwriting icons Chuck Prophet and Angelo Petraglia (Kings of Leon), Grey and long-time friend and producer Dan Prothero hit the “real” studio, Jim Devito’s Retrophonics in St. Augustine, Florida, to begin tracking Georgia Warhorse. There, Grey would again track the majority of the instruments himself, playing guitars, keys, harmonica and delivering all the vocals with his gritty, straight-from-the-soul voice. Prothero’s approach as producer and Retrophonics’ unvarnished, natural sound mirrors Grey’s vision of musical tones and his love of the rustic Florida backwoods, where his family has lived for generations.

Joining him for a track on this album is Grey’s long-time musical hero and reggae icon Toots Hibbert, who sings with Grey on The Sweetest Thing. “Toots is the greatest soul singer I’ve ever heard and one of my biggest influences,” says Grey. Georgia Warhorse also provided the opportunity for Grey to work with another friend and hero, fellow Jacksonvillian Derek Trucks. In true neighborly fashion, Trucks stopped by JJ’s house to record slide guitar for the song Lullaby. “Derek Trucks is the greatest guitarist I’ve ever seen and I’m honored to have Derek and Toots on my record,” says Grey. (mofro. net)

Recorded at Retrophonics Studio, St. Augustine, Florida: "For over 20 years I’ve been coming to this place to record. In fact it’s the only studio I’ve ever tracked an album in. All of the previous records were recorded here in the same manner and, to be quite honest, I wouldn’t know how to record an album in any other studio. In truth, “studio” is really a meaningless word in the face of what Retrophonics is. It is a work of art. A living museum of the finest equipment from the golden ages of music production put together over many long years with such meticulous detail that it borders on chaos. Egypt has the pyramids, France the Eiffel, Italy the Sistine and right here in north Florida we’ve got Jim Devito’s masterpiece, Retrophonics. Thanks Jim. -– JJ "