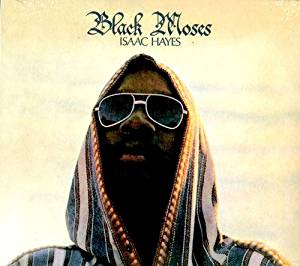 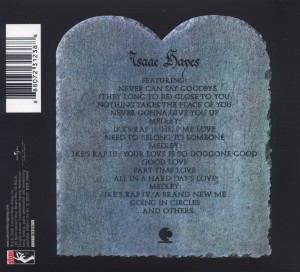 Isaac Hayes 4th album and the 1st double, but then he makes that kind of epic, sprawling, sound that suits this kind of longevity. Includes the classic 'Never Can Say Goodbye'.

Sometimes it is difficult to take a man with a tea towel on his head seriously, but when it comes to Isaac Hayes he is even forgiven for wearing gold chains all over his body. The godfather of "gruntin' get down funk" tells it like it is in his own inimitable style across 90 minutes plus of this 1971 double. Opening with 5 minutes of his '71 hit 'Never Can Say Goodbye' also a hit for the Jackson 5 at the same time and 4 years later for Gloria Gaynor, Ike covers a whole bunch of classic soul tracks - Toussaint McCall's 'Nothing Takes The Place Of You', Johnny Taylor's 'Part Time Love' and the Gamble, Huff, Butler stormer 'Never Gonna Give You Up'. Essential seventies soul for first timers and fans alike - first UK CD release.

Stax records proudly presents the reissue of Isaac Hayes’ epic 1971 album Black Moses, which captured the artist at the peak of his popularity. The release is a complete replication of the original Black Moses package, folding out into a cross-shaped image of the artist. The album was re-mastered from the original tapes. New liner notes are by Rob Bowman, the Grammy Award-winning Stax scholar and author of Soulsville U. S.A: The Story of Stax Records.

Stax Records was re-launched by Concord Music Group in 2007, the year of the legendary soul label’s 50th Anniversary.

Black Moses, a 14-song two-album set that will be reissued on two CDs, reached #1 on Billboard’s soul album chart and #10 pop, remaining on the charts for 40 weeks. Bowman describes it as “a wondrously crafted, intense evocation of the vagaries of love gone bad,” which Hayes himself corroborated: “I was going through some emotional turmoil. You can tell by the tunes on the album that I was going through a break-up of my marriage. It was the only way I could express myself.”

The album may be best remembered by its lead single, Hayes’ signature version of the Jackson 5’s “Never Can Say Goodbye,” which was on the radio months before the rest of the album had been completed. Other highlights include the Bacharach-David-penned Carpenters hit, “Close to You,” Toussaint McCall’s “Nothing Takes the Place of You,” the Curtis Mayfield-authored Gene Chandler hit “Man’s Temptation,” Little Johnnie Taylor’s “Part Time Love,” Kenny Gamble and Thom Bell’s Aretha Franklin hit “A Brand New Me,” Luther Ingram’s “Help Me Love,” Curtis Mayfield’s “Need To Belong,” the Whispers’ “Your Love Is so Doggone Good,” Kris Kristofferson’s “For the Good Times,” which had been a hit for Ray Price, Bacharach-David’s “I’ll Never Fall in Love Again” and the Hayes composition “Good Love.” “Isaac’s ability to take other people’s material and make it so deeply personal is nothing short of brilliant,” writes Bowman.

As the ‘70s progressed, Hayes adjusted admirably to the disco onslaught. On his exit from Stax, he released four albums in a little over a year (Chocolate Chip, Disco Connection, Groove-A-Thon and finally Juicy Fruit [Disco Freak]) while launching his career as a movie star in Three Tough Guys and Truck Turner. Hayes was loyal to his band members (known as the Movement) and many of them are featured on Juicy Fruit (Disco Freak) including drummer Willie Hall, keyboardist / co-arranger Lester Snell and guitarists Michael Toles and Charles “Skip” Pitts. Trumpeter Ben Cauley was a member of the Bar-Kays who survived the tragic 1967 plane crash that claimed the life of Otis Redding. Juicy Fruit (Disco Freak) is also one of the few Hayes albums written entirely by Hayes and includes several noteworthy songs including “Let’s Don’t Ever Blow Our Thing,” “The Storm Is Over” and “Music to Make Love By.”

Hayes’ unexpected death on August 10, 2008 at the age of 65 robbed us of future soulful treasures, but we can rediscover R&B classics like Black Moses and overlooked gems like Juicy Fruit and groove anew on his extraordinary musical vision.
(concordmusicgroup. com)