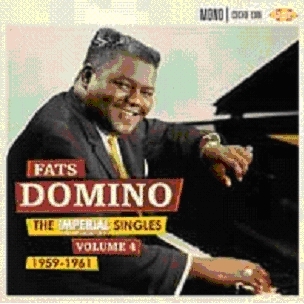 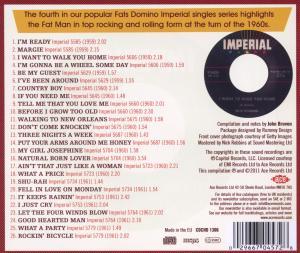 Bewertung:
lieferbar innerhalb einer Woche
(soweit verfügbar beim Lieferanten)
EUR 18,99*
Versandkosten
The first three volumes of the Fats Domino Imperial Singles series (CDCHD 597, 649 and 689) saw New Orleans’ finest ascend from neophyte blues and boogie-woogie stylist to bona fide rock’n’roll star. With gold-plated hits of the calibre of ‘Ain’t That A Shame’, ‘Blueberry Hill’, ‘Blue Monday’ and ‘I’m Walkin’’ receding into history, it was assumed that Fats had peaked artistically. Wrong: One spin of this release will dispel that notion handsomely.

To put the era into perspective, rock’n’roll was taking an involuntary breather but R&B was brimming with self-confidence through the records of not only Fats Domino but also Ray Charles, Sam Cooke, the Drifters, Jackie Wilson and an upcoming James Brown. Even Chubby Checker’s twist craze was R&B under another name.

With longtime producer and songwriter partner Dave Bartholomew (see CDCHD 1303) still firmly in control of the sessions at Cosimo Matassa’s studio, Fats was subtly ringing the necessary changes: New Orleans parade rhythms were blended with South Louisiana swamp-pop songs from Bobby Charles and Jimmy Donley; bigger bands were drafted in, with young Wardell Quezergue writing arrangements; and occasional overdubs of orchestral accompaniment (surprisingly successful) and choruses (not so) were utilised.

The standout studio musicians included Domino’s trusty road-band members Lee Allen and Herb Hardesty (tenor saxophone); Walter “Papoose” Nelson and Roy Montrell (guitar); and Cornelius Coleman (drums). Bartholomew added fiery trumpet when required, while Fats’ imperious piano was ever present. In order to recapture the hit sound of the original Imperial 45s as heard over the radio, on jukeboxes and on home record players, this release is mono only.

What of Fats today? As an octogenarian, he has ageing problems and no longer performs. But his stock is higher than ever following his dramatic rescue during the horrors of Hurricane Katrina in 2005. He was honoured, with Dave Bartholomew, by the Rock and Roll Hall of Fame at its American Music Masters event in Cleveland last November. And Rick Coleman’s Domino biography, Blue Monday, has been published.

Fats’ Imperial recordings have now assumed classical proportions. I confidently predict that “The Imperial Singles Vol 4” will be seen as one of his best – and most enjoyable – compilations. There is still one more volume in this important series to come. (By John Broven / acerecords. co. uk)