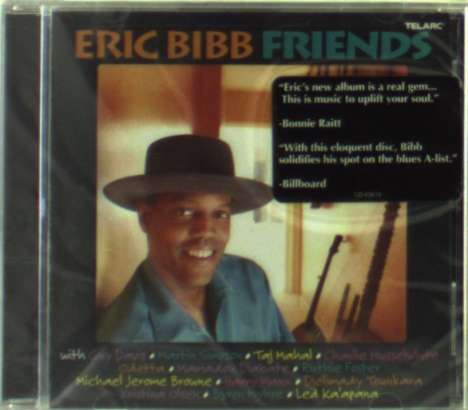 Eric Bibb
Good Stuff (180g) (Limited Edition) (45 RPM)
2 LPs
EUR 51,99*
* u.a. mit Taj Mahal, Charlie Musselwhite &
Odetta
When Eric Bibb set out to record Friends, his debut on the Telarc label, he was urged by his manager, Alan Robinson, to make a list of musicians who had inspired him over the years - people with whom he would love to collaborate. At the top of Bibb’s wish list was Taj Mahal. Bibb knew he couldn’t make this new record without Taj. “Recording this first-take version of St. Louis Jimmy’s ‘Goin’ Down Slow’ with Taj Mahal will forever be one of the highlights of my musical journey,” he says.
“Goin’ Down Slow” was the starting point for Friends, the wish-list-turned-reality that came together in a variety of different contexts at different times, often at festivals and other relaxed grassroots settings. “I first heard Ruthie Foster on a workshop stage at the Canmore Folk Festival in the Canadian Rockies,” says Bibb. “I asked her that evening to record with me, and we did in the festival director’s living room. She performed ‘For You’ in just one take.”
At the Edmonton Folk Festival, word quickly spread that Bibb was organizing a recording session. “Guitarist Djelimady Tounkara from Mali came by to listen, but ended up playing the classic praise song ‘Kulanjan’ in the green room,” he recalls. “I heard it and quickly ushered them into the studio to capture the impromptu magic. ‘Sebastian’s Tune’ was inspired by Taj’s recording of the traditional dance tune ‘Buck Dancer’s Choice.’” Other Friends tunes recorded at the folk festival included “Cowgirl Queen” with Led Ka’apana, and “Needed Time” with Harry Manx.
Friends also includes “Tain’t Such a Much” with the great Odetta, and “99 ½ Won’t Do,” featuring Guy Davis on 12-string slide guitar, vocals and harmonica. Bibb refers to the later song as “a free-form medley of several well-known gospel themes.” Capturing the essence of some of the great blues musicians of his youth, Bibb teams up with harpist Charlie Musselwhite on “Six O’Clock Blues.” Closing out this ride is “Dance Me To the End of Love,” a song that Bibb wrote for his eldest son’s wedding. He’s joined on this track by pianist Jerry Yester, who produced Tom Waits’ 1973 debut album, Closing Time.
Born in New York in 1951, Eric Bibb is the son 1960s folk and musical theater singer Leon Bibb. Eric’s uncle was the world-renowned jazz pianist, John Lewis, of the Modern Jazz Quartet, and his godfather was singer/actor/activist Paul Robeson.
Bibb has toured throughout the world enjoying success in the United States, Canada, England, France, Germany, Sweden, Australia and Japan. He and his band have played at many major festivals, including the Cambridge Folk Festival in the UK; Byron Bay & Port Fairy in Australia; the Vancover, Calgary & Edmonton Folk Festivals in Canada; Poconos & Bull Durham Blues Festivals in the U.S.; Midfyns Festival in Denmark; Womex in Sweden; and the Cognac Blues Festival in France.
Bibb’s talent for both performing and songwriting has been recognized with a Grammy nomination and most recently for 2003 W.C. Handy nominations for Artist of the Year, Acoustic Blues and Acoustic Blues Album of the Year.
In the making of Friends, Bibb set out to showcase some of the musicians he respects and reveres most - artists whose individual visions intersect with his own in many places. In the final analysis, he accomplishes this mission and more - and generates his own creative light and intensity in the process.