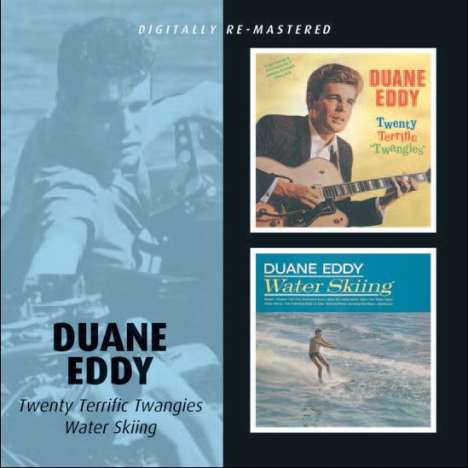 lieferbar innerhalb 1-2 Wochen
(soweit verfügbar beim Lieferanten)
EUR 9,99*
Versandkosten
Without Duane Eddy's groundbreaking guitar style in the late 1950s, popular music would be very different. Many artists credit him with being their inspiration, and his 'twangy' sound has been copied but never successfully recreated.

His unique style resulted in a string of chart hits by the early 60s, and in 1961 he was voted NME's 'Top World Personality' – ahead of Elvis! In 1986 he returned to the singles charts with 'Peter Gunn', a collaboration with Art of Noise. Originally released by RCA in the UK in 1980, 'Twenty Terrific Twangies' was sought after by fans as it contained five previously unreleased tracks.

The album opens with the ever-popular '(Dance With The) Guitar Man' and includes one of Duane's biggest hits, 'Rebel Rouser'. But it is those five 'new' tracks that are the treats, with 'Sunday Morning Rain' surely one of THE best 'mood' songs by Duane, enhanced by the wonderful orchestral accompaniment.

1964's 'Water Skiing' was inspired by the water sport, with appropriate track titles to match. Duane was proficient at the sport, so he was able to infect the music with real, experienced feelings and emotions.

The water sound effects added in the studio also enhance the feeling of 'being there', with Duane's deep guitar sound echoing and mirroring the roar of the outboard motor.