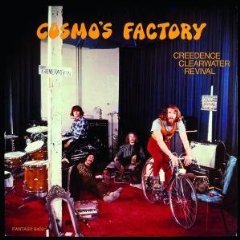 Cosmo’s Factory was the fourth and biggest of the string of five Top 10 albums Creedence Clearwater Revival released in 1969 and 1970. Included were “Travelin’ Band,” “Lookin’ Out My Back Door,” “Who’ll Stop the Rain,” “Run Through the Jungle” and covers from Marvin Gaye (CCR’s signature take on “I Heard it Through the Grapevine”), Bo Diddley, Roy Orbison and Arthur “Big Boy” Crudup. Bonus material includes a bare bones, horns-free remake of “Travelin’ Band,” a live version of “Up Around the Bend” from the 1971 European tour, plus an unreleased version of “Born on the Bayou” emanating from the CCR/Booker T & the MGs summit which took place in 1970 at Cosmo’s Factory studio. Notes were penned by Robert Christgau.

In celebration of the 40th Anniversary of Creedence Clearwater Revival, the legendary band’s first six albums are being reissued by Fantasy Records as six individual expanded-edition CDs. The albums — Creedence Clearwater Revival, Bayou Country, Green River, Willy & the Poor Boys, Cosmo’s Factory and Pendulum, all originally released from 1968-70 —have been remastered and contain B-sides and unreleased studio & live material.