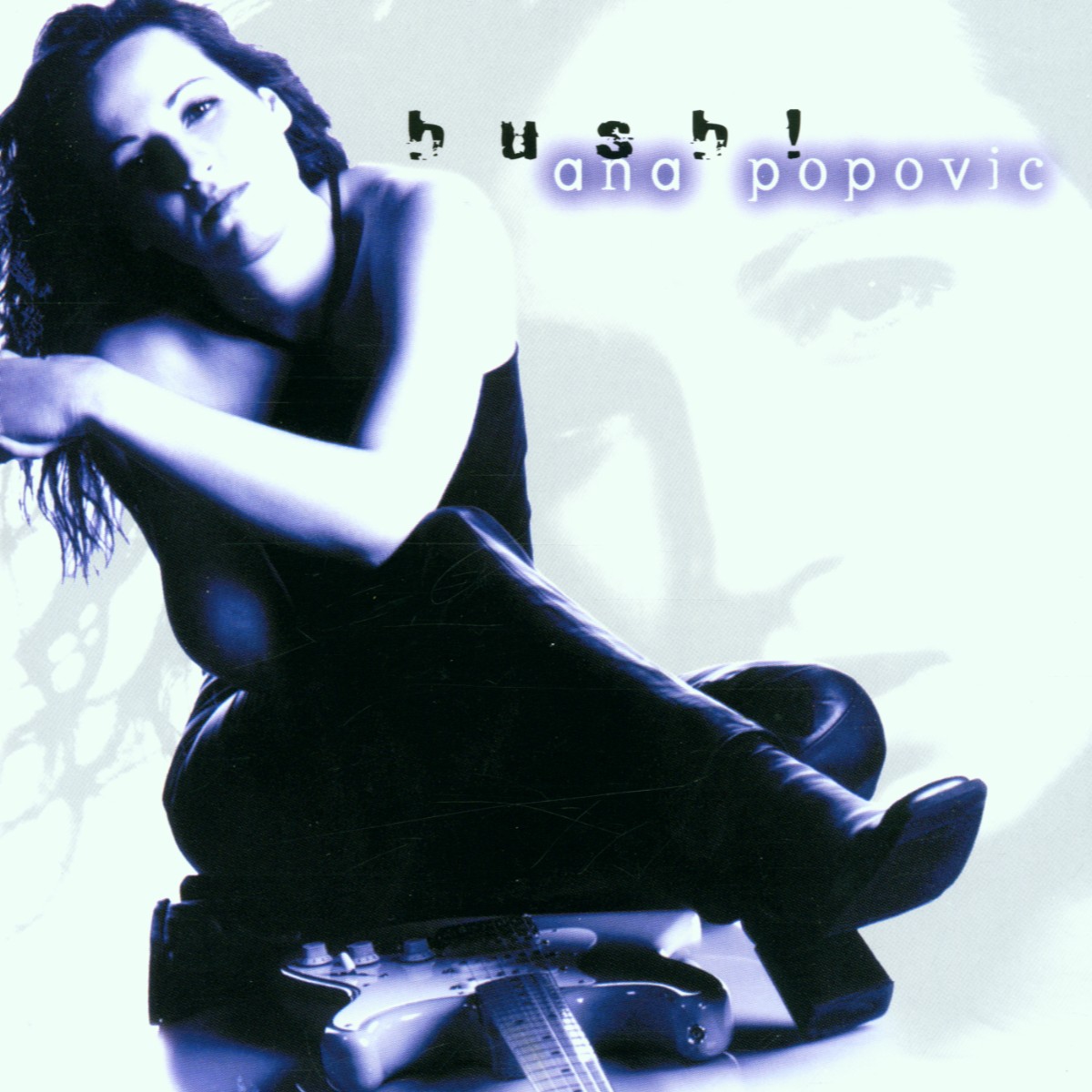 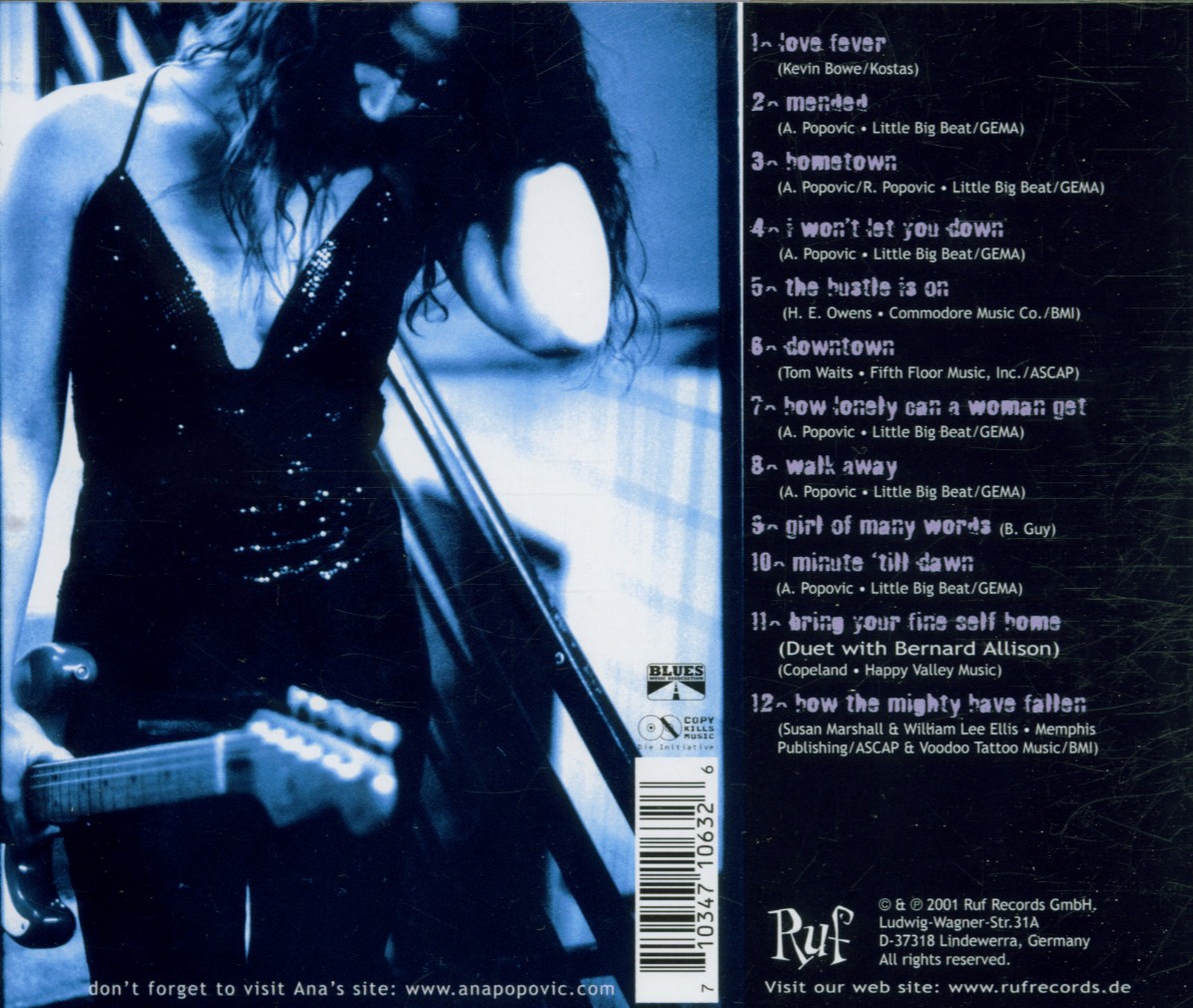 ANA POPOVIC was born in Belgrade / Yugoslavia in 1976. She discovered her love of Blues music early in her youth; soon she began to learn to play the guitar, and founded her first band in October of 1995. The name of the band was the same as the title of this CD: "Hush". The group became immensely popular in Ana's native country, and by the end of 1996 ANA POPOVIC had appeared at most major clubs in Yugoslavia.

In 1996, the band already played its first concert in a foreign country, Greece. Another highlight in this year was their appearance as an opening act for the Junior Wells Chicago Blues Band at the Marsoni Blues Festival, as well as a spot at the internationally renowned Mojo Blues Fest.

In 1997, the band was invited to Hungary for an appearance at the International Blues, Jazz & Rock Festival PAKS. Numerous concerts at clubs and festivals contributed further to ANA POPOVIC's popularity in her native Yugoslavia. With more than 100 gigs at clubs and festivals as well as over 20 TV appearances, 1998 turned out to be another successful year in ANA'S still young career. At the end of 1998, ANA POPOVIC & HUSH recorded the CD "Hometown", capturing a cross-section of their live program. This CD already gave an impression of ANA'S great talent as a guitarist and singer.

In January of 1999, ANA POPOVIC moved to Utrecht in The Netherlands, and started jazz guitar studies at the Utrecht Academy of Music. She quickly established herself on the Dutch Blues scene, resulting in appearances with the British guitarist Sammy Mitchell, as well as Dutch bands such as Red Rooster Club, The Millstreet Blues Band, Trouble No More and the Backstreet Men, at clubs and local festivals (Culembourg Blues Festival, Culembourg; Amazing Blues Party, Nijmegen; Blues Route On Tour, Hilversum; Blues Route Fest, Hardewijk; Hoeve Blues Fest, Venray). Reviews of such events in the Dutch press were uniformly positive, and ANA'S name quickly became known around the country. At the same time, she also continued to play with her band "Hush" in July and October of 1999 (e. g. at the West Rhythm Festival).

In November 1999, ANA POPOVIC made her first contacts within the German Blues scene, and was able to prove her professionalism in a guest spot with the Bernard Allison Band (January 2000 tour), and at several concerts with Germany's renowned Blues Company. She was then invited to do a combined interview / concert at Richard Bargels "Talkin' Blues" show in Cologne. Numerous festival appearances with her Dutch band complete the picture of a very successful year 2000 for the young woman from Belgrade.

ANA POPOVIC is one of the most promising young Blues talents of today. She will surely make her way to the top ranks of the European Blues scene - she's got the necessary chops, charisma, enthusiasm and energy, and is ready, willing and able to grab her chances. Her live program is a winning mixture of traditional Blues and elements of R&B and Soul, guaranteed to thrill any Blues audience.