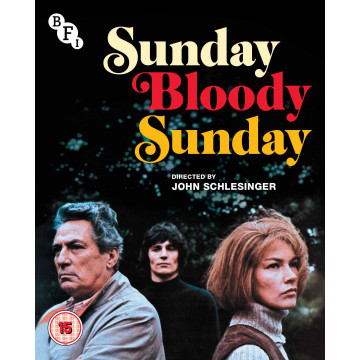 Peter Finch and Glenda Jackson star in John Schlesinger’s piercing and brilliantly observed suburban drama.
A recent divorcée (Jackson) and middle-aged Jewish doctor (Finch) find themselves embroiled in a progressive love triangle with a bisexual artist (Murray Head). Both discover a new freedom with their young lover, as they confront the conventions and obstacles that have defined their lives.
An exploration of middle-class life and permissiveness in 1970s London, its depiction of bisexuality changed the landscape of LGBTQ+ representation on screen. Featuring outstanding, BAFTA-winning performances by Finch and Jackson, Sunday Bloody Sunday is a tender and complex view on the politics of love, lust and longing.

Sunday in the Park (1956, 15 mins): early documentary short by director John Schlesinger
The Pacemakers: Glenda Jackson (1971, 14 mins): a documentary profile of actress Glenda Jackson, including footage of the actress performing on the set of Sunday Bloody Sunday
Fully illustrated booklet with new writing on the film and full film credits