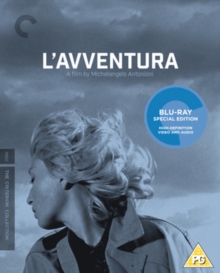 Michelangelo Antonioni invented a new film grammar with this masterwork. An iconic piece of challenging 1960s cinema and a gripping narrative on its own terms, L’avventura concerns the enigmatic disappearance of a young woman during a yachting trip off the coast of Sicily, and the search taken up by her disaffected lover (Gabriele Ferzetti) and best friend (Monica Vitti, in her breakout role). Antonioni’s controversial international sensation is a gorgeously shot tale of modern ennui and spiritual isolation.

Anna, the daughter of a wealthy businessman, leads a privileged life in Rome with her architect fiancé Sandro. Along with Sandro, her closest friend Claudia and a group of fellow socialites, they undertake a yacht excursion to an island off the coast of Sicily. Anna vanishes from the scene when she leaves the yacht to explore the island on foot. The shock of her disappearance and the lack of any sign of her whereabouts shatter the complacency of her family and friends. Only Sandro and Claudia make real efforts to find the slightest trace of Anna. But the void revealed in the aftermath haunts them at every turn, stalking their growing mutual affection.

L’Avventura received a special prize at the 1960 Cannes Film Festival for “creating a new film language”. In presenting the teeming uncertainty of modern life without offering the slightest recourse of a motive or explanation, Michelangelo Antonioni provoked audiences to look at films in a new way. A regular fixture on myriad lists of the greatest films made, L’Avventura remains a landmark of film history.

New 4K digital restoration, with uncompressed monaural soundtrack on the Blu-ray
Audio commentary featuring film historian Gene Youngblood
Olivier Assayas on “L’avventura,” an analysis of the film in three parts
Antonioni: Documents and Testimonials, a fifty-eight-minute documentary by Gianfranco Mingozzi from 1966
Writings by director Michelangelo Antonioni, read by actor Jack Nicholson, plus Nicholson’s personal recollections of the director
Trailer
New English subtitle translation
PLUS: An essay by critic Geoffrey Nowell-Smith, Antonioni’s statements about the film after its 1960 Cannes Film Festival premiere, and an open letter distributed at the festival

"L'Avventura has still held up remarkably well, perhaps because the creepiness of existence remains topical in these apathetic times" - Filmcritic.​com