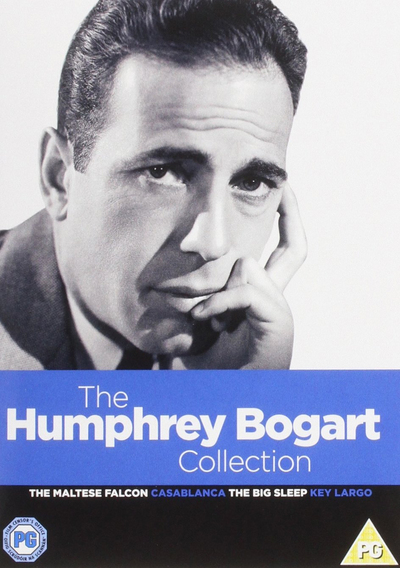 'The Maltese Falcon' (1941) follows Sam Spade (Bogart), a cynical private eye caught up in the hunt for a jewel-encrusted falcon while searching for the murderer of his partner, Miles Archer (Jerome Cowan). His fellow treasure hunters include a sinister 'little and large' act, a psychotic tearaway, and the duplicitous femme fatale Brigid O'Shaughnessy (Mary Astor).

In 'Casablanca' (1942), during World War II, former lovers Rick Blaine (Bogart) and Ilse (Ingrid Bergman) are reunited by chance in Casablanca where he runs a nightclub and she is working for the French Resistance. Recriminations, rekindled desires and patriotic duty battle for primacy as Ilse's husband tries to outwit the local Nazis and escape from Morocco, whilst Rick and Ilse rekindle their love and decide to run away together.

'The Big Sleep' (1946) follows private detective Philip Marlowe (Bogart) as he agrees to rid a wealthy family of a blackmailer who is threatening the younger daughter, only to then fall in love with the elder sister Vivian (Lauren Bacall).

Finally, in 'Key Largo' (1948) Frank McCloud (Bogart) is staying at a run-down hotel on an isolated Florida island when it is taken over by a gangster and his entourage. However, an impending hurricane gives McCloud the opportunity and courage to take matters into his own hands as he attempts to lure the gangster to his death.