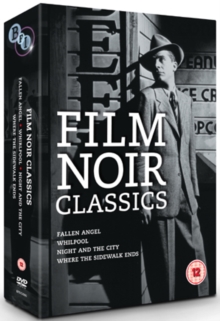 Otto Preminger directs 'Fallen Angel' (1945) in which Dana Andrews plays Eric Stanton, a down-on-his-luck press agent who drifts into a small Californian coastal town. There he meets June (Alice Faye), a wealthy but reclusive woman, but has his eye on sultry waitress Stella (Linda Darnell). In love with Stella but broke, Eric marries June for her money, planning a rapid divorce. However, the story takes an unexpected turn when Stella is found murdered.

Preminger also directs 'Whirlpool' (1950), starring Gene Tierney as Ann Sutton, the well-dressed wife of a successful psychoanalyst. When arrested for shoplifting, she is saved from inevitable scandal by the intervention of the suave but slightly sinister hypnotist David Korvo (Jose Ferrer). However, the salvation proves deceptive and she soon finds herself caught up in a web of blackmail and murder.

Jules Dassin directs the classic B-movie thriller 'Night and the City' (1950), starring Richard Widmark as Harry Fabian, a small time con-man with dreams of one day making it big. In the back streets of London, he runs across a Greco-Roman wrestler, and arrives at a plan that he believes will set him up financially for life. However, the more people he involves in his scam the more difficult it becomes to manage, and Harry has to fight hard to keep his eyes on the prize.

Dana Andrews also stars in Preminger's gritty 1950 thriller 'Where the Sidewalk Ends' as corrupt New York cop Mark Dixon. Already in trouble for his brutal methods and alienated from his colleagues, he pursues a gang leader with vindictive zeal and accidentally kills a possible murder suspect. His guilt deepens when he falls in love with the dead man's wife and her father, an innocent cab driver, finds himself accused of the murder. Dixon finds ultimate redemption - at a price.