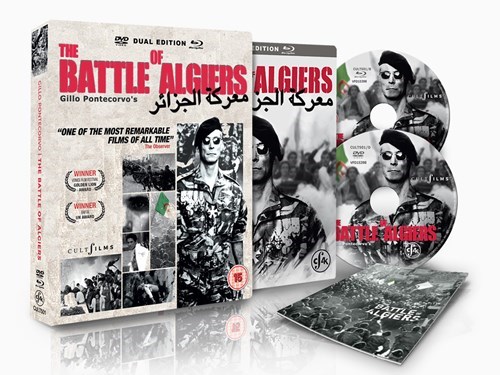 CultFilms is proud to present the newly restored 4K version of Battle of Algiers, Gillo Pontecorvo’s multi award-winning masterpiece, as never seen before.

Winner of the Golden Lion at the 1966 Venice Film Festival and nominated for three Oscars® (Best Director/ Screenplay and Foreign Picture), The Battle of Algiers is a unique ground-breaking film revered by filmmakers such as Ken Loach, Chris Nolan, Spike Lee, Paul Greengrass et al. Summed up by The Observer as “One of the most remarkable film of all time”, it features Oscars® winner Ennio Morricone’s most haunting score. It arrives as a stunning luxury collector’s dual-format set full of fascinating special features and a booklet in December 2017.

Shot in a gritty documentary style devised by Pontecorvo, with remarkable crowd scenes, it features the then pioneering use of amateur actors including real-life guerrilla fighter Saadi Yacef (who went on to coproduce the film) all adding to the film’s realism. To date, the film is used by military organisations including the Pentagon to offer insights in to guerrilla strategy and the effects of foreign occupation.

Painstakingly restored in 4k by the multi-awarded L'Immagine Ritrovata - with the participation of the director’s son, cinematographer and director Marco Pontecorvo - in collaboration with CultFilms, the 4K preservation of Pontecorvo’s unique B&W vision was nominated for the Best Restored Film at the 2016 Venice Film Festival. Battle of Algiers is more topical and burningly relevant today than ever…

New extra on the 4K restoration
Booklet by Alan O'Leary (from his book on BATTLE OF ALGIERS)
Interview with Dir. Gillo Pontecorvo on the making of the Battle of Algiers
Interview with actor & producer S Yacef, head of FLN guerrillas, now Senator on the real battle
Interview with FLN fighter Zohra Drif Bitat (guerrilla bomber and later wife of Algerian President)
Exclusive in depth analysis by Director Paul Greengrass