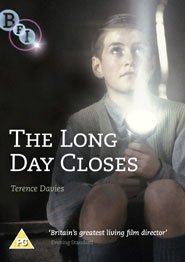 A collection of moments in the childhood of Bud, a Liverpudlian schoolboy in 1955. Plucked from his cosy home when he is sent to his new Catholic school, the film looks at his loneliness as teachers and pupils pick on him and his increasing isolation at home as he hovers between childhood and adolescence. His beloved film idols and screen stories keep him company in his imagination but in the real world he feels increasingly like a misfit.

Terence Davies' follow-up to Distant Voices, Still Lives extends his autobiographical memoirs into the '50s.
Following his prize-winning debut feature film Distant Voices, Still Lives (1988), in 1992 Terence Davies made The Long Day Closes, now released by the BFI on DVD for the first time, alongside The Terence Davies Trilogy.
Terence Davies' lyrical hymn to childhood revisits the same territory as Distant Voices, Still Lives, this time focusing on his own memories of growing up in a working-class Catholic family in Liverpool.
Eleven-year-old Bud (a heartbreaking performance from Leigh McCormack) finds escape from the greyness of '50s Britain through trips to the cinema and in the warmth of family life. But as he gets older, the agonies of the adult world; the casual cruelty of bullying, the tyranny of school and the dread of religion, begin to invade his life.
Time and memory blend and blur through Davies' fluid camerawork; slow tracking shots, pans and dreamlike dissolves combine to create the world of Bud's imagination and the lost paradise of his childhood.