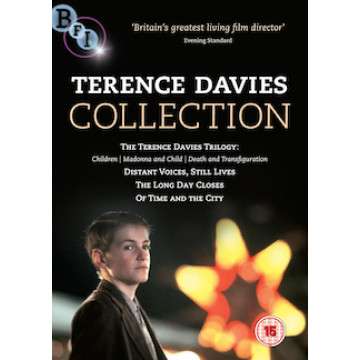 Considered by many to be Britain's most gifted and remarkable filmmaker, Terence Davies' visually stunning, intensely personal films have impressed audiences the world over and seen him proclaimed by critics as one of contemporary cinema's true poets.

The Terence Davies Trilogy (1976-1983)
These three semi-autobiographical short films follow the journey of Robert Tucker, first seen as a hangdog child in Children, then as a hollow-eyed middle-aged man in Madonna and Child, and finally as a decrepit old man in Death and Transfiguration. Dreamlike and profoundly moving.

Distant Voices, Still Lives (1988)
An impressionistic view of working-class life in 1940s and 1950s Liverpool starring Freda Dowie and Pete Postlethwaite. Through a series of exquisite tableaux Davies creates a deeply affecting photo album of a troubled family wrestling with the complexity of love.

The Long Day Closes (1992)
Bud's home is happy and safe, but his Catholic school is a harsh world where teachers administer lashings, and he is bullied and friendless. Once again Davies creates a dreamlike montage of memories, using gliding tracking shots and an artful layering of pop songs and religious music.

Of Time and the City (2008)
Davies revisits the city of his youth in this deeply personal BAFTA-nominated evocation of post-World War II Liverpool. Through the film's patchwork visual poetry, woven entirely from painstakingly researched archival footage, Davies explores an urban landscape that echoes his own troubled past to speak candidly of his childhood experiences.