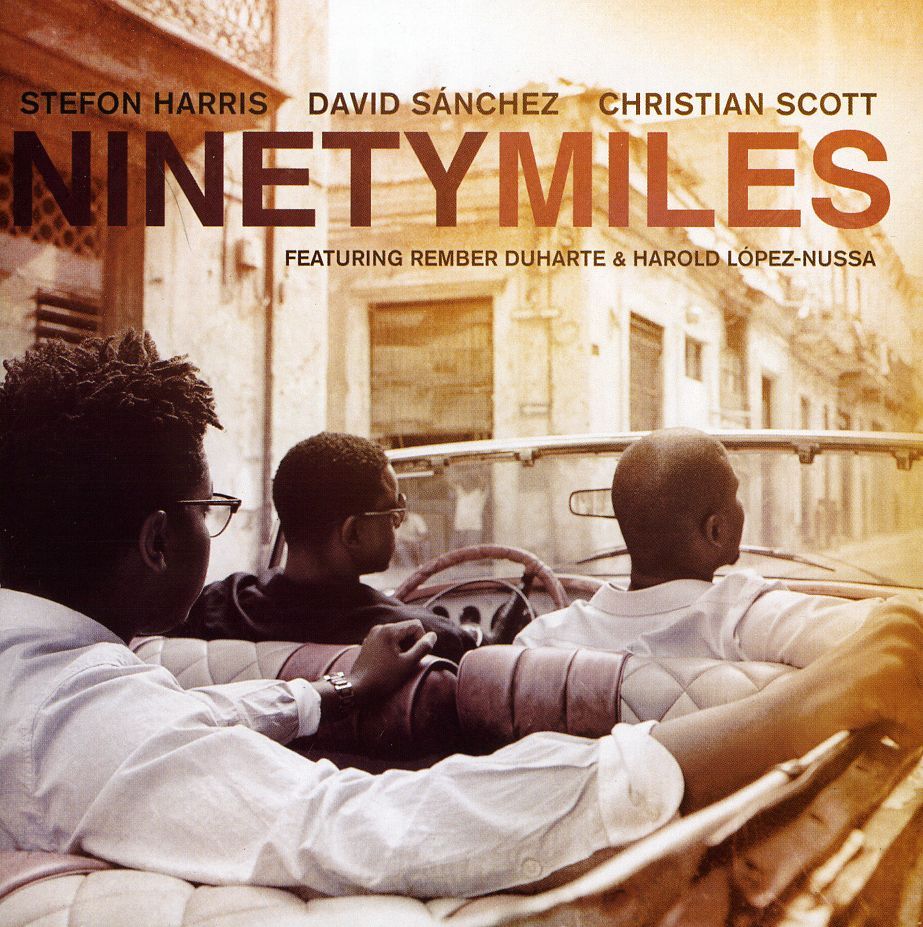 All distance is relative, especially where geopolitical borders and ideologies are involved. We speak one language, they speak another. We follow our system, they follow theirs. When we focus on the differences, a relatively short stretch of land or water starts to look like a yawning chasm. But when we look at each other as individuals and focus on the similarities, that “chasm” is actually a very short distance. Less than a hundred miles.

Musicians – especially jazz musicians, whose craft is in many ways an improvised form of communication – understand this principle inherently, perhaps better than any politician or diplomat could ever hope to. Vibraphonist Stefon Harris, saxophonist David Sánchez and trumpeter Christian Scott cross that divide in their new recording, Ninety Miles.

Recorded entirely in Havana, Cuba, with the help of some highly talented Cuban players – pianists Rember Duharte and Harold López-Nussa, each leading their own quartets – the nine-song set is an experiment that examines the fascinating chemical reaction that takes place when musicians from different cultures come together and converse in a common language that transcends mere words. The set also includes a DVD that is a sneak peek of the forthcoming documentary of the same name that chronicles the recording process of the album in Cuba. It will also include two bonus live performances of “City Sunrise” and “La Fiesta Va.”

“This record is about the power of music to communicate, and break down some of the barriers that result from language and politics and culture,” says John Burk, Chief Creative Officer of Concord Music Group and producer of the album. He developed the idea for the project after hearing a number of Cuba's extraordinary young jazz pianists. "Cuba seems to have an amazing amount of incredible musicians, and I was particularly impressed with Harold and Rember," recalls Burk. "I found it really interesting that these musicians had studied and embraced the jazz genre (an American art form) and taken it to such a high level. Their circumstances, a very solid music educational system with Afro-Cuban roots, coupled with the isolation of the embargo throughout their lifetimes, had created something unique and special in their music." It took about year to get permission from the U. S. Government, and then Burk, along with co-producer Chris Dunn, booked Harris, Sánchez and Scott to perform in Havana in May 2010 with quartets lead by Harold and Rember. Ninety Miles is a snapshot of the rehearsals just prior to the 2010 performance.

Harris, a four- time GRAMMY® nominated vibist-percussionist, is no stranger to adventurous collaborative projects. A native of Albany, New York, his earliest work included session gigs with Steve Turre and Charlie Hunter in the 1990s before he recorded his solo debut in 1998 on Blue Note (A Cloud of Red Dust). He’s cut seven albums since then, including his GRAMMY® nominated Concord Jazz debut Urbanus.

Harris contributes three tracks to Ninety Miles. New arrangements of “Black Action Figure” and “This Too Shall Pass” and “Brown Belle Blues” written especially for this project. “Before I wrote it, I listened to a bunch of recordings by Rember and his rhythm section as a way to capture some of their energy in the song,” he says. “On top of that, I put a real soulful, bluesy, almost gospel-like melody on top of it as a way to bring all of our influences together.”

Sánchez brings plenty of his own cross-cultural sensibilities to the project. A native of Puerto Rico, he moved to New York City at 18 and studied at Rutgers University under Kenny Barron while gigging with numerous Latin jazz specialists, including Paquito D’Rivera, Claudio Roditi and Dizzy Gillespie. In a body of recorded work that stretches back to the mid-1990s, Sánchez has crafted a signature sound that seamlessly merges elements of Afro-Cuban rhythm with bebop.

Sánchez’s “City Sunrise” was inspired by music from Cameroon. “I had planned to record it on one of my own projects, but it made perfect sense to use it here,” he says. “It not only has a Cuban sound, but there are other elements there as well that give it a world groove.” His second contribution, “The Forgotten Ones” – written for the people of post-Katrina New Orleans – is a quieter, more subtle piece that provides a contrast to some of the more energized tracks in the set.

Both of Sanchez’s offerings are propelled by López-Nussa and his rhythm section, which provides a counterbalance to Duharte and his crew elsewhere in the set. Each of the two pianists contributes two tracks of his own, which further thickens the album’s cultural mix. “Harold and Rember are from the same generation, and yet they have two completely different approaches,” says Sánchez. “Rember is more rooted in the African sound, and he’s a little more raw in some ways. But Harold is completely different. You hear the Cuban influences in his music, and perhaps more of the western European classical piano.”

Born and raised in New Orleans, GRAMMY® nominated trumpeter Christian Scott has been blending elements of Alt Rock, Jazz, Hip Hop, and Classical since his 2006 debut recording, Rewind That. On Ninety Miles, he taps into the Cuban roots that are not only a part of his home but his family history as well. “New Orleans is in many ways an extension of the Caribbean,” Scott explains. “There are a lot of Cuban people in New Orleans as well as Dominican’s and Haitian’s. They come to the city and become very much a part of the culture there. My great-grandmother was born in Cuba, and when I was growing up, she would sing Cuban songs to me. I grew up around that music. So while I don’t particularly think of myself as Cuban, it doesn’t necessarily mean that I was not able to pick up on and appreciate certain aspects of the culture.”

The brilliance and innovation of Ninety Miles is only part of the story. The recording is also a clear statement about the power of music to unite in ways that politics and diplomacy can’t. “The arts can lead the way, because they are the universal language,” says Burk. “And music is certainly one of the most powerful forces within the arts. You can change someone’s life in five minutes with the right piece of music. I don’t know of any other art form that can do that. This record does illustrate a way – or at least the ability – for people to work together despite differences.” (concordmusicgroup. com)