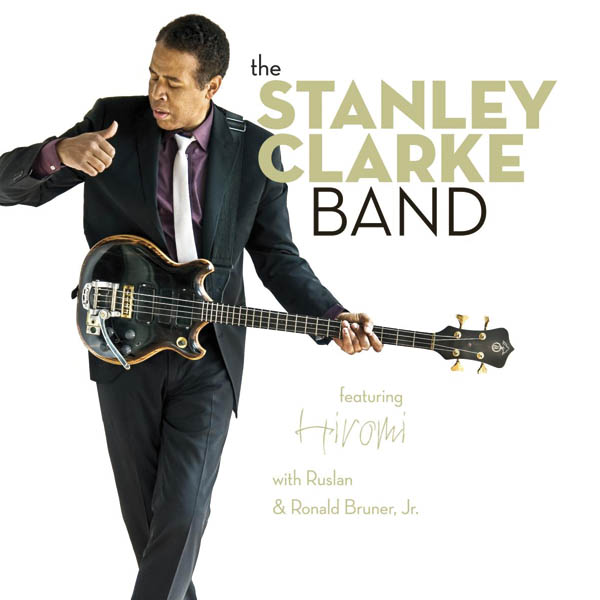 Unlike his previous acoustic bass releases, Clarke feels that this album’s music is fresh and different from just about anything he’s done before. Produced by Clarke and Lenny White, the range of collaborative material on The Stanley Clarke Band has allowed him to venture to new levels of experimentation, utilizing his arsenal of bass instruments. Clarke compares this new release to the first three albums of his solo career: Journey to Love, Stanley Clarke, and School Days, with long extended electric pieces that take the listener on a kind of journey.

“Technically, it’s a Stanley Clarke record, but it’s very much a band-oriented record at the same time,” says Clarke. “I may be the leader, but everyone played an important role in what emerged. If a project like this can be looked at like a ship, I’d be the one steering the ship and keeping everybody on course. But all hands were definitely on deck, and everyone played an important role in getting us to our destination.”

Also a new foray for Clarke, the album includes original compositions from members of the band. He is joined by Stanley Clarke Band keyboardist Ruslan Sirota and drummer Ronald Bruner, Jr. – who have been performing and recording with him for the better part of five years. Innovative young musicians, they have virtually grown up in Clarke’s band and bring a freshness he admires. Following 2009’s highly-acclaimed Jazz In the Garden, this is featured artist Hiromi Uehara’s second Clarke recording collaboration. Clarke’s rugged and complex bass work serves as the ideal foil for her trademark fiery and expressive piano chops, as reflected through critics’ praising it as “a superb trio effort” (Bass Player) and “one of the best jazz CDs of the year” (San Jose Mercury News).

“There are people on The Stanley Clarke Band other than myself who have something to say,” explains Clarke. “Everyone on this project brought their own music and their own ideas. The styles of the individual tunes may be different, but the continuous thread that runs through the whole record is the fact that we’re all operating as a unit on each track.”

While Hiromi is generally regarded as a solo artist, she shifts effortlessly into a band setting, says Clarke. “She doesn’t need to be on the stage with anybody else, because she’s a phenomenon on the piano,” he says. “But, she likes collaborating with other musicians. She can play faster than anybody, but she can really listen, and she’s right there with you.”

Acoustic pianist / composer / arranger Ruslan Sirota has traveled the world, playing with some of the biggest names in classical and pop music. Born in the Ukraine, he was exposed early in his youth to American jazz and improvisation, and now shows an intelligence and understanding of the genre way beyond his years. “Ruslan is becoming a recognizable force in the music world,” Clarke notes. “He is one of the few musicians I’m aware of that knows a thousand songs. He has a unique understanding of the jazz language.” On this album, Sirota brings an unparalleled contribution in piano performances, not only on keyboard but with his profound melodic techniques on acoustic piano.

Ronald Bruner, Jr., is a second-generation drummer extraordinaire. His earliest influence was his father, Ronald Bruner, Sr., a world class drummer who has performed and recorded with Diana Ross, the Temptations and Gladys Knight. Clarke feels that Bruner is probably one of the most important young drummers on the scene today and compares his innovation, technique and skill to that of the legendary drummer Tony Williams. Although a dynamic fixture in Clarke’s touring band, Bruner has also performed with George Duke, Lee Ritenour, Suicidal Tendencies, and Wayne Shorter.

Perhaps the most appealing aspect of The Stanley Clarke Band is the exceptionally organic nature of its genesis – the sense of grassroots creativity that existed outside of any efforts to tailor the music to any specific segment of the market.

Clarke concludes, “This is the last electric album I’m going to do for awhile. The legacy of this release is that I’m providing lots of material and homework for a new generation of bassists to catch up with. I’ve worked hard to give the bass a distinctive voice, and I feel so excited about where it’s going.”

Stanley Clarke
If This Bass Could Only Talk
CD
EUR 11,99*
alle anzeigen