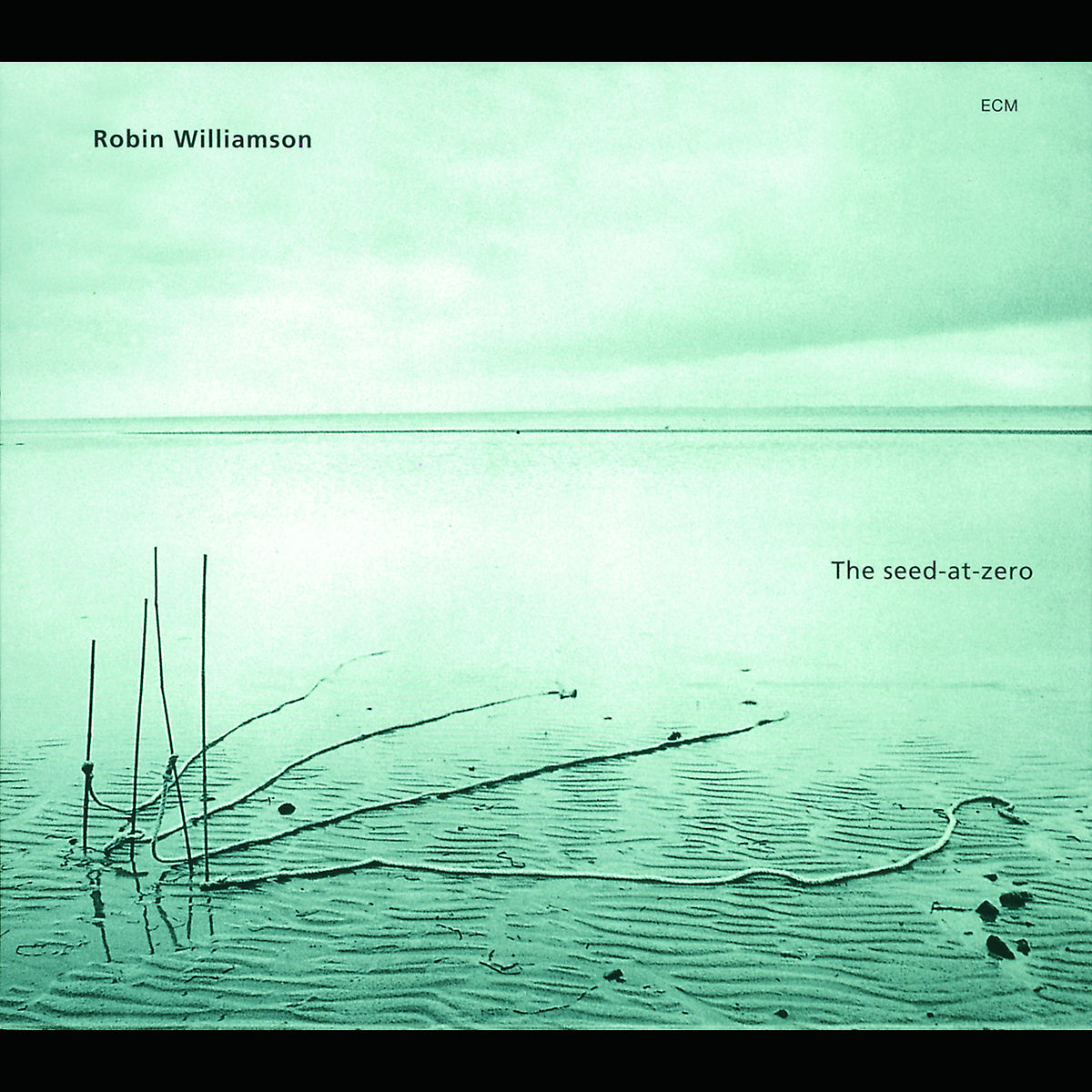 Bewertung:
versandfertig innerhalb von 1-3 Tagen
(soweit verfügbar beim Lieferanten)
-22%
EUR 17,99**
EUR 13,99*
Versandkosten
NRW Vertrieb - ECM zum Sonderpreis
The ECM debut by one of the founding fathers of the British folk music revival is a remarkable recording. It sets poetry by Dylan Thomas to music, examines Thomas's relationship to the "Bardic tradition" of visionary Welsh poets including Henry Vaughan, Llywarch Hen and Taliesen and, in revisiting some of Robin Williamson's strongest songs from a distinguished 40 year career, fixes the Scottish singer / songwriter's work firmly within that tradition. The writers featured are outstanding exponents of what Williamson likes to call "wrought language", taking almost a sculptural approach to the written and the spoken word.

Born in Edinburgh in 1943, Williamson became a professional musician at the age of 16. He was originally inspired by traditional singers including Jeannie Robertson, Joe Heaney and Jimmy McBeath: "Their influence on me remains very strong. To me, folk music and folk tales embody the notion of the 'inspired voice', older mysteries coming through the singer or narrator. I try to communicate that with purity."

Robin Williamson first came to attention in 1962 when he, Bert Jansch and Clive Palmer ran an Edinburgh folk club which became a centre for new impetuses in the music. Amongst the artists who gravitated there were John Renbourn, Anne Briggs, John Martyn, Roy Harper, and Archie Fisher. It was also home base for the duo of Williamson and Palmer. In 1965, they recruited a third player, Mike Heron, and called themselves the Incredible String Band, a group that quickly moved beyond any conventional definitions of "folk". Although there was at the time no convenient tag for their eclectic mix of styles, the ISB were really standard bearers of a nascent "world music", blending or contrasting contemporary folk with North African street music, Indian ragas, flamenco, Bahamian balladry, Chicago and country blues, jug band music, Scottish / Irish jigs and more in a global musical vision. Their influence on the rock music of the psychedelic 60s was profound, and their recordings, for Elektra and Island, were best sellers. A 1967 recording, "The Hangman's Beautiful Daughter", was a Top 5 hit in Britain, and subsequent ISB albums also charted. They filled concert halls on both sides of the Atlantic, headlined festivals, appeared at Woodstock and in Bill Graham's Fillmores East and West, and made many concerts. Allen Ginsberg heard Williamson and Mike Heron singing their literate, allusive, well-crafted songs and immediately set about "tuning" his own poetry. The Rolling Stones tried to sign the Incredible String band to their label, and artists from Judy Collins to Van Morrison covered Williamson's songs, which were also praised by Bob Dylan, Pete Townshend, Tim Buckley, John Lennon and many others.

As the 60s turned into the 70s, however, forces around the Incredible String Band were attempting to streamline it into a more conventional rock group, better suited to a less imaginative time. Increasingly disenchanted with this development, and never much interested in electric music in the first place, Williamson quit the group during a US tour in 1974. For ten years he based himself in California, where he wrote and published poetry and fiction, and also led an American ensemble, The Merry Band. In the mid-1980s, he returned to Britain and set up home in Cardiff in Wales, working primarily as a solo artist, playing mostly Celtic harp and guitar now, and singing stronger than ever. His own grass roots record label, Pig's Whisker Music, documents his achievements in areas ranging from traditional and contemporary song to storytelling, poetry, music for theatre, and settings of the Psalms. He continues to tour extensively in Britain and the US each year, and has maintained a loyal following. A fanzine celebrating his current and past work, Be Glad For The Song Has No Ending (named after a 1970 film about the ISB), is published twice-yearly in England.

For his first ECM recording, Robin Williamson chose to focus his attention on a writer important for his development, the Welsh poet Dylan Thomas (1914-1953). Williamson's love of words was in part sparked by hearing broadcasts of Thomas' Under Milk Wood as a child. That sense of the intoxicating power of words, blending the commonplace and the strange in immensely powerful imagery and symbolism, never left him.

In the mid 1980s, Williamson performed in a music-theatre production by dramatist Geoff Moore entitled Prospect of the Sea, based on the life of Thomas. In this production, Williamson sang and intoned Thomas's texts to his own improvised harp accompaniment. He was struck, then, by the musical potential of the verses and had long considered a more careful investigation of them. (Thomas, incidentally, was highly regarded by the contemporary composers of his day, and at the time of his death was due to begin working on an opera with Stravinsky. He was also closely associated with English 12-tone composer Elisabeth Lutyens, who set several of his poems. But he also had a fondness for folk music, and said once that it was the language of the Scottish ballads - and the rhythms of the Bible - that made him want to be a poet in the first place.)

"The Seed-At-Zero", the album's tittle track, incorporates one of Thomas's most inscrutable texts. It is concerned with the beginning of things, with life coming into being. "In My Craft Or Sullen Art" is a kind of writer's manifesto. The epic "Poem On His Birthday", one of Thomas's most astonishing late creations, mixes reflections on one man's self-destructive condition with thoughts on both the beauty and cruelty of nature in a world which, at the time, in 1950, seemed to be teetering on the brink of nuclear cataclysm. "Hold Hard, These Ancient Minutes In The Cuckoo's Month" looks sardonically at the Englishman's taste for blood-sports in glorious natural settings. "On No Work Of Words" is a frustrated but also humorous account of the struggle with that phenomenon called "writer's block". "Holy Spring" is about finding the strength, fuelled by a pagan faith in the power of love, to continue through the grimmest of times - in this case the aftermath of a WW II bombing. (Needless to add that all of Thomas's poems have many more layers of meaning).

In the course of the recording session, other sung poetry was spontaneously added to the project, as Williamson began considering Thomas's deeper poetic roots. The album opens with "The Word" by Henry Vaughan, the great Welsh mystical poet (1621-1695). Here are also poems from Welsh tradition attributed to the bards Taliesen and Llywarch Hen (6th century AD), and the well-known "The Bells of Rhymney" by 20th century Welsh workingman's poet Idris Davies.

This treasure-trove of Welsh verse, set to music by Williamson - with the exception of "Rhymney" which uses Pete Seeger's melody - is balanced by a selection of his own songs. The oldest of these, "Cold Days Of February" is a protest song originally performed by the Incredible String Band. In its first recorded appearance the lyrics were censored; the full text is restored here, making plain that the subject matter is the ongoing troubles in Ireland. "To God In God's Absence" now comes roaring out of Thomas's "Holy Spring". It is similarly concerned with faith and disbelief. The dense imagery of "Skull And Nettlework", ruminating on cemeteries and the procreative urge, deals with subjects that also preoccupied Dylan Thomas. Again and again, from these juxtapositions, we understand that Thomas and Williamson are, in a real sense, "in the same business". The album closes with "For Mr Thomas", Williamson's potent tribute to the multi-faceted attributes of his early hero.

"The Seed-At-Zero" is issued in August to coincide with events in England. For the first time in 33 years, the original Incredible String Band of Robin Williamson, Mike Heron and Clive Palmer are touring together, with concerts including two shows at London's Bloomsbury Theatre (already sold-out). Media interest in this reunion is high.

American release of Williamson's ECM disc will be in February 2001, supported by a coast-to-coast US tour on which Robin will perform the entire album. This will be followed by selected American festival dates for the Incredible String Band.

Williamson has set himself a great challenge in setting so many poems by Thomas, probably the most musically gifted of any poet writing in English since Shakespeare himself. ... That the album works as well as it does is a tribute to Williamson's restraint. Accompanied variously by his guitar, harp, and mandolin, Williamson's voice, ravaged by time, touring, and smoke, is always in service to the words, and his uncluttered arrangements leave ample space in which each syllable can be fully heard and savored, even if the ever-branching meanings can never be quite fully of finally understood. The result is less musical (not a criticism) than bardic, less a collection of songs that are simply more literate than the norm and more an evening with a singer of Celtic lays ancient and modern. For such a bard, the occasional strum of harp strings is more punctuation and atmosphere than the tightly wrought and structured units of what has become known as the modern "song". Here, most of that craft has gone into the language itself; on many of these tracks, Williamson doesn't so much "sing" as keen or chant or, simply, speak clearly. ... I highly recommend it to anyone who wants to hear big, powerful language - whether sung, chanted, or pronounced as a spell - caught and held in a snare of music as spare and tough as darning thread. In the literal sense of a single word, it's incantatory. Richard Lehnert, Stereophile

A wholly convincing demonstration of Williamson's uniqueness on which he pulls together his many and varied talents in an intense way that recalls the very best work of the Incredible String Band. This really is an extraordinarily good album, even by Robin's extraordinarily high standards. Moreover, the jazz / contemporary label ECM may well prove an ideal vehicle for granting Robin a credible profile outside the confines of his usual folk audience. David Kidman, Traditional Music Maker