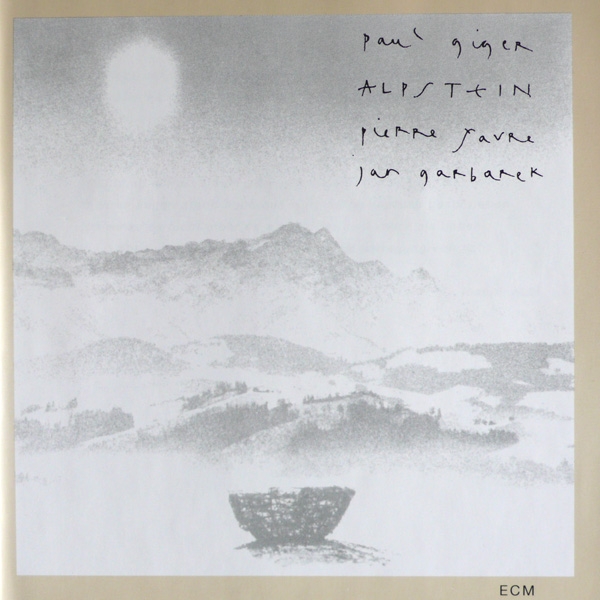 NRW Vertrieb - Vinyl zum Sonderpreis
+ Jan Garbarek, Pierre Favre
Extraordinary cover photography directs the listener’s imagination toward a mythic Switzerland that Paul Giger has set to music. The figures bent beneath their loads in Peter Maurer’s mountainscape could as easily be Zen monks as Alpine farmworkers; pictures of the masks and bells of Appenzeller folk tradition also conjure non-European associations – only the cows look unambiguously Swiss.

Alpstein is the part of Switzerland violinist Giger calls home, and he has researched its folk music back to the point where music history intersects with legend. It’s thought that some of his music came from the East, at least as far East as the Caucasus, maybe further. (Martin Schaub’s liner notes sketch the musical history of the area.) Some of Giger’s material on Alpstein is loosely based upon the songs and calls from the 18th century that Swiss men, conscripted into the French army, took with them to Paris, pieces expressive of a great homesickness (and which they sang at the risk of the death penalty). But Giger also reaches deeper into the past, in search of the source of the wild, freely intonated yodel that still echoes around the mountains. He is well served here by his associates – Jan Garbarek’s saxophone has been calling the cattle home since his investigations of Norwegian “lokk” pieces first surfaced on Dansere (ECM 1075) in 1975.

Here, Garbarek’s tenor at times works the range of the small alphorn. And in duet with Pierre Favre on “Alpsegen”, Giger returns a swirling, improvisatory abandon to the Swiss folk dance (long since lost in the emasculated “traditional” music played for tourists).

Altogether, a powerful and involving successor to Chartres (ECM New Series 1386), which gave early evidence of Giger’s sensitivity to time and place. The environmental sounds of rural and urban Switzerland have a part to play on Alpstein; the closing “Trogener Chilbiläbe” incorporates the slamming of a prison cell door, and was recorded in the jail where Giger is obliged to spend a few days of each year for refusing to pay military tax. Alpstein independence and stubbornness is uncompromising.