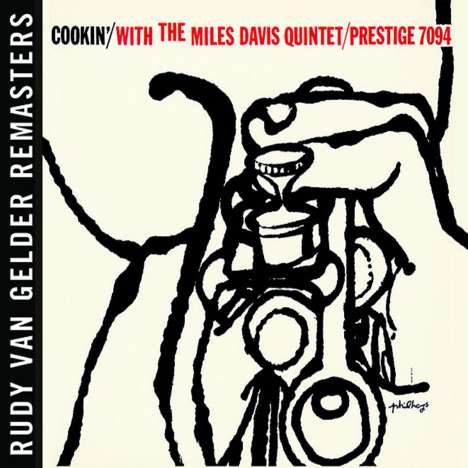 umgehend lieferbar, Bestand beim Lieferanten vorhanden
EUR 8,99*
Versandkosten
+ John Coltrane, Red Garland, Paul Chambers, Philly Joe
Jones
Cookin’ With the Miles Davis Quintet is the first classic album of four total that emerged from two marathon and fruitful sessions recorded in 1956 (the other three discs released in Cookin’s wake were Workin’, Relaxin’ and Steamin’). All the albums were recorded live in the studio, as Davis sought to capture, with Rudy Van Gelder’s expert engineering, the sense of a club show á la the Café Bohemia in New York, with his new quintet, featuring tenor saxophonist John Coltrane. In Miles’s own words, he says he called this album Cookin’ because “that’s what we did—came in and cooked.” What’s particularly significant about this Davis album is his first recording of what became a classic tune for him: “My Funny Valentine.” Hot playing is also reserved for the uptempo number “Tune Up,” which revs with the zoom of both the leader and Trane.

“I was the engineer on the recording sessions and I also made the masters for the original LP issues of these albums. Since the advent of the CD, other people have been making the masters. Mastering is the final step in the process of creating the sound of the finished product. Now, thanks to the folks at the Concord Music Group who have given me the opportunity to remaster these albums, I can present my versions of the music on CD using modern technology. I remember the sessions well, I remember how the musicians wanted to sound, and I remember their reactions to the playbacks. Today, I feel strongly that I am their messenger.”