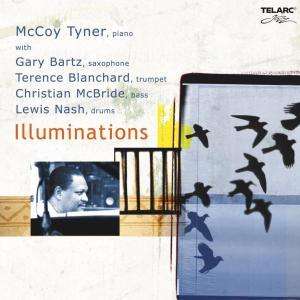 The disc opens with three in a row from the McCoy Tyner pen—the lively title track that jumps out of the gate with clean solo work from Blanchard and straightforward drumming from Nash; followed immediately by the Latin-flavored “Angelina” and the bluesy and rollicking “New Orleans Stomp.”

After an easygoing rendition of Harold Arlen’s classic “Come Rain Or Come Shine,” featuring an abundance of Tyner fingerwork from the very first bars, Tyner opens the program to contributions from his bandmates. Bartz’s “Soulstice” and Blanchard’s “Blessings” are both energetic compositions propelled by extensive sax and trumpet work, while McBride’s “West Philly Tone Poem” is a quiet and atmospheric piece that merges bowed bass lines with Tyner’s lyrical piano lines.

The Illuminations session unites Tyner with some fine sidemen. Gary Bartz started his career as a sideman to Max Roach and Art Blakey in the 1960s. He formed the NTU Troop a few years later and experimented with the fusion of soul, funk, African folk music, hard bop and vanguard jazz. Since then, he has developed into one of the finest alto sax players of his generation.

Terence Blanchard played alongside Lionel Hampton in the early 1980s, then joined Art Blakey’s Jazz Messengers after Wynton Marsalis left the group. He has scored and / or played on a number of Spike Lee films (Do the Right Thing, Mo’ Better Blues, Jungle Fever, Malcolm X), and has maintained a solid solo career.

Christian McBride rose to prominence in the 1990s with a style reminiscent of Ray Brown and Paul Chambers. His musical associations of the past decade include Bobby Watson, Roy Hargrove, Freddy Hubbard, Benny Green and Ray Brown.

An alumni of Betty Carter’s band in the mid-80s, Lewis Nash later joined the Tommy Flanagan Trio, where he helped create some of the most memorable jazz recordings of the 1990s. Nash spent that same decade performing with a host of other notables: Sonny Rollins, Clark Terry, Wynton and Branford Marsalis, Cyrus Chestnut and many others. More recently, Nash has collaborated with David O’Rourke in the experimental merger of jazz with Irish and Celtic music.

With Tyner leading this finely tuned crew, Illuminations lights up the jazz world with yet another fine opus from a veteran piano master.