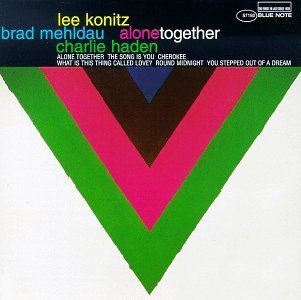 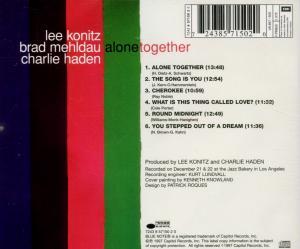 Alone Together, a live recording of six inspired trio performances by alto saxophonist Lee Konitz, bassist Charlie Haden and pianist Brad Mehldau taped during a two night engagement at the Jazz Bakery in L. A. December 20 21 1996, is set for Oct. 21 release by Blue Note Records. The recording, which documents the first time that these three distinctive instrumentalists had played together as a unit, is remarkable for the near telepathic level of ensemble playing and abundance of inspired solos on impromptu versions of six standards from the jazz and popular song repertoire: "Alone Together," "The Song Is You," "Cherokee," "What Is This Thing Called Love," "'Round Midnight" and "You Stepped Out Of A Dream."

True to the spirit of jazz, the trio itself was a completely spontaneous creation. Konitz and Haden had been booked at the Jazz Bakery and were planning to use the occasion as the basis of a duo recording for Japan's King Records. Haden told Konitz he wanted to add Mehldau to the gig, and over the course of two nights they performed two duo sets and the three trio sets from which the music on Alone Together was culled. Nothing was rehearsed or pre arranged; Konitz simply called the tunes on stage and the music immediately took off. As jazz writer Art Lange observes in his liner notes, Konitz, Haden and Mehldau interact as though they were three old friends involved in an animated conversation. Each artist had undoubtedly played each standard hundreds of times, yet "...the music remains authentic and vital because of their willingness to explore new musical possibilities, to take chances and to feed off the energy spontaneously created in this three part invention."

Inspired by the restless spirit of improvisation, alto saxophonist Lee Konitz has never taken the time to stand still and rest on his laurels. He began his career playing impressionistic neo classical arrangements and Gil Evans' first bebop charts as a 20 year old member of the Claude Thornhill Orchestra. Before the end of the 1950s, Konitz had been an integral part of the Miles Davis "Birth of the Cool" band, a close associate of pianist Lennie Tristano with whom he recorded what some consider the first "free jazz" sides and a member of the Stan Kenton Orchestra. He has since performed in almost every conceivable instrumental context from completely unaccompanied to duos, trios, quartets, quintets and nonets and over the decades has collaborated with master musicians from Gerry Mulligan, Art Pepper, Jimmy Giuffre and Warne Marsh to John Scofield, Joe Lovano, Michel Petrucciani and Bill Frisell.

Leader of Quartet West and the Liberation Music Orchestra, Charlie Haden invented the role of free jazz bassist as a member of the original Ornette Coleman quartet and proceeded to provide the rhythmic foundation to ensembles led by Keith Jarrett, Pat Metheny, Paul Bley and Paul Motian. The only time Haden and Konitz previously recorded together was on a Motian led project of Broadway show tunes. A classically trained pianist, Brad Mehldau began playing jazz as a member of the Hall High School Jazz Band in Hartford, CT. He then enrolled at the New School for Social Research in New York where he studied with pianists Fred Hirsch, Junior Mance and Kenny Werner and drummer Jimmy Cobb. Mehldau's career took off after he was hired by Cobb to join the band Cobb's Mob, and he has since released two recordings as a leader on Warner Brothers, Introducing... and The Art Of The Trio, Vol. I.

According to Konitz, the secret to making something absolutely new out of an old tune is "...thinking that I've never played it before. My goal is still to listen to whom I'm playing with and try to react. That's the fun of improvising, that's what keeps it fresh and interesting." On Alone Together, Konitz, Haden and Mehldau succeed in instilling six old favorites with such new vigor and vibrancy that one actually has the feeling they are playing them and we are hearing them again for the first time. (bluenote. com)