John Pizzarelli: Kisses In The Rain 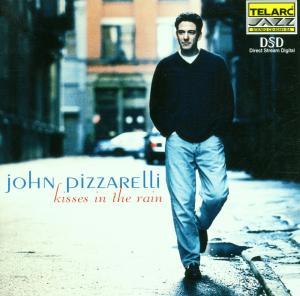 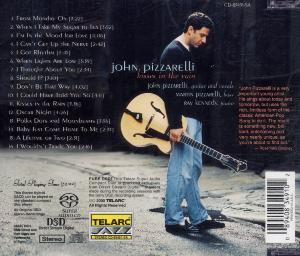 Already among the best-loved contemporary jazz and popular song stylists, John Pizzarelli and his Trio have added to their formidable reputation with the impending release of Kisses in the Rain, his seventeenth album and Telarc debut.

Mixing a solid collection of traditional greats with a handful of originals that are every bit as polished and perfect, Pizzarelli and his Trio—gifted pianist Ray Kennedy and bassist brother Martin Pizzarelli—turn Kisses in the Rain into a special, private nightclub performance for each listener. The Trio takes advantage of their eight years together; playing off one another and tacitly communicating like only a group as tight-knit as this can.

The result is an album played nearly to perfection, but with heart and soul to spare. Pizzarelli has always been an artful interpreter of the classic American songbook, and he continues that tradition here with such greats as “From Monday On,” “I’m In the Mood for Love” and “Sugar to Tea.” Add to that Pizzarelli’s own standards-inspired originals, such as “A Lifetime or Two” and “I Wouldn’t Trade You,” both co-written with wife Jessica Molasky, and “Baby Just Come Home To Me” as well as Ray Kennedy’s tribute to the great Oscar Peterson, “Oscar Night,” and you have one of Pizzarelli’s most satisfying and accomplished albums.

”It’s one thing to say, ‘Let’s make a record that captures the feeling of a live concert,’” writes Pizzarelli in his entertaining liner notes, “but another to actually do it.” But the recording formula on Kisses in the Rain helped provide the missing ingredient. “The setup was very tight: Ray just over my left shoulder, Martin to my direct right. Because of that closeness, no headphones were needed. The atmosphere was one of a living room jam session.” That intimacy helps make Kisses in the Rain a truly special recording, one of the few that can claim to capture the essence of the group’s live performance.

Pizzarelli, the son of jazz guitar great Bucky Pizzarelli, began recording in 1983 and has created a string of albums that have epitomized a contemporary approach to the American songbook, both in his vocals turns on greats such as Nat “King” Cole and Frank Sinatra and through his exquisite guitar playing. Over the years, the John Pizzarelli Trio has become a well-oiled machine, as tight as a group gets, making this recording a true representation of the magic this trio can create. (concordmusicgroup. com)

John Pizzarelli
One Night With You
CD
EUR 22,99*