Eleni Karaindrou: Eternity And A Day 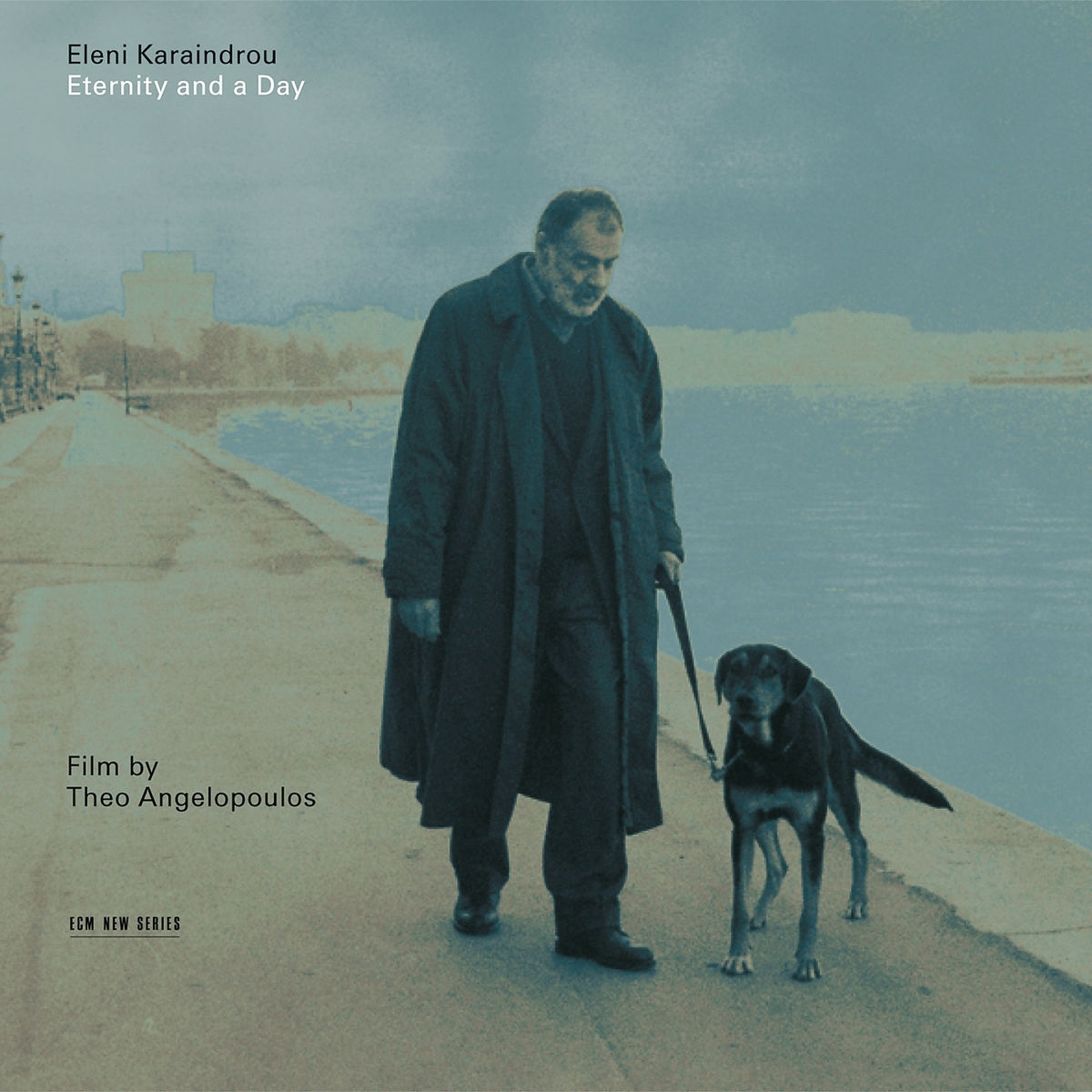 »Eternity and a Day«, the new film by Theo Angelopoulos, with Bruno Ganz, Achilles Skevis, Isabelle Renauld and Fabrizio Bentivoglio in the leading roles, received (the vote of the jury, chaired by Martin Scorsese, was unanimous) the Golden Palm at the 1998 Cannes Film Festival. Although »Ulysses' Gaze« had been awarded the Grand Prix du Jury at Cannes in 1995 and international awards for his work in general have been abundant, this most prestigious of film prizes had until now eluded the Greek director.

Eternity and a Day (Greek: »Mia eoniotita ke mia mera«) is also the title of Eleni Karaindrou's new album, the fourth of her ECM recordings to feature music written for the films of her countryman. The first of these, issued under the title Music for Films, focussed primarily upon the director's great »Trilogy of Silence« (»Voyage to Cythera«, »The Beekeeper« and »Landscape in the Mist«). The second presented music written for The Suspended Step of the Stork, Angelopoulos' critically-heralded 1991 film. The third, 1995's Ulysses Gaze, with the extraordinary viola playing of Kim Kashkashian augmenting Karaindrou's gifted cast of Greek soloists was both a critical and commercial success, and the album that prompted Time magazine to hail Karaindrou as »Greece's most eloquent living composer«: »If Homer had written music, it might have sounded something like this, « writer Michael Walsh maintained, »dark and brooding, redolent of rich red wine and the salty brine of the sea. At once plaintive and erotically lyrical, it would sing of love and loss, of the passion that motivates humans to achieve great things.«

This is exceptional praise for a musician who composes primarily for the screen, but the long artistic alliance with Theo Angelopoulos has given Eleni Karaindrou a special role and a unique responsibility, and at this point it is difficult to dissociate the quality of her melodies with the images themselves, brilliantly framed by the cameras of Giorgos Arvanitis and Andreas Sinanos. Composer and director share an understanding that has few historical precedents, although there are parallels in the collaboration between, say, Jean Renoir and Joseph Kosma, or Polanski and Komeda, Fellini and Nino Rota; indeed, Karaindrou was presented with the Fellini Award by Italy's Europa Cinema magazine for her work as a whole. By now Eleni is able to intuit, as she explained to the German-Greek magazine Chronika, the rhythm that a given film will finally assume by monitoring Angelopoulos's hand gestures and tone of voice, and she oftnen has her leitmotif before there is a shooting script. »It is a feeling and a common language of communication, « says the director of his work with Eleni, »which creates a common bond between us.« The understanding is such that sometimes Angelopoulos reverses the traditional soundtrack formula, tailoring scenes to match the mood and length of Eleni's themes, rather than the other way around.

The way in which Eleni's themes are combined to make albums with extended musical development has, since Music for Films, been the responsibility of ECM producer Manfred Eicher. Karaindrou: »Manfred took into his hands original pieces of mine composed and recorded for the film ›Eternity and a Day‹, admired them, worked on them and created out of them a new work. Binding together one composition with another, merging the colours and the rhythms he brought forth a work that belongs to him as well.« It should be noted, however, that overlapping waves of influence are at work here. Karaindrou has been an ardent follower of ECM's musical directions for more than 20 years – since first hearing and being smitten by the Jan Garbarek album Places – and Eicher, in the early years of his recording studio work, was inspired by the films of Angelopoulos.

In »Eternity and a Day«, the motives – visual and geopolitical – that haunt Theo Angelopoulos are ever-present. His Greece is only intermittently sunlit, and border zones are unstable and turbulent. »I always shoot in winter, ›the director told International Herald Tribune writer Joan Dupont. ‹The sea, water, mist – I can't resist them. That's the way I project my inner landscape.« The setting for the film is a rainy Thessalonika, once the most cosmopolitan city in Greece, and with architecture of every style – Armenian, Turkish, Greek, neoclassical, Central European. »The house we shot in is an Italian consulate. Before it was Austrian, earlier it belonged to NATO. These houses, set in the city, looking on the sea, once related to nature, but the cities have become monsters and nature has disappeared.«

Angelopoulos originally wrote the script of »Eternity« for Marcello Mastroianni who starred in »The Beekeeper« and »The Suspended Step of the Stork« but failing health ruled out the actor's participation. »Then I saw Bruno Ganz wearing a black raincoat in the hall of a hotel, just as he does in the film, and knew he was right.«

Ganz is a powerful presence as the celebrated but doomed poet Alexander, diagnosed with terminal cancer and with only a day left before he must enter hospital to face the end. It turns out to be a day of reckoning as he looks, with a new clarity, at the family he has neglected, and becomes embroiled in the life of a nine-year old Albanian refugee, on the run from rival mafia gangs – engaged in the grim business of selling and exploiting immigrant boys – and from the police. The Herald Tribune: »Determined to take the child ›home‹ to Albania, Alexander drives through the mountain pass. . . Gates open silently, children are suspended in mid-air, stuck like frozen birds on barbed wire fences; the boy recoils, and Alexander drives back to Thessalonika.«

Such are the scenes, between allegory and metaphor, that Karaindrou must counterpoint with her music. Poetic use is made of the instruments of Greek folk music, particularly the sound of the clarinet, keening in the mountain air, or hovering, lyrically, over a rich bourdon of strings. . . The oboe of Vangelis Christopoulos and the french horn of Vangelis Skouras, both frequently applauded in reviews of Ulysses' Gaze, are again tellingly deployed. Colleague Christopoulos, talking about Karaindrou's music in a Greek magazine has eloquently pinpointed those qualities that make her the most committed advocate of Angelopoulos's worldview:

»Stubbornly refusing to accept the flattening of this world, Eleni Karaindrou refers us through her music to the harmony and proportion of nature, and the search for hope out of desperation.«

»Eleni Karaindrou's simple, ethereal melodies are so infectious and profoundly sublime that they easily stand by themselves, unencumbered by visual images. And yet one has no trouble visualizing the numbing loneliness of the desolate, or the tragic ordeals of sorrow that reside in the heart of this music. . . In truth, the experience of listening to this unforgettable music cannot be conveyed by mere words.« – The Music Advocate

»Strangely inflected melodies against mysterious drones that seem to exist outside of time. Imagine music aching with nostalgia, as mixed between sharp and blurred, real and imagined, as memory itself.« – American Record Guide

»For many years Karaindrou has been developing a fragile, solemn music that goes beyond film scoring; Her compositions have a life of their own. She favours a harmonic music that has an almost folk-like simplicity in its melodic development. But she casts these melodies in muted hues and shades that could have been morphed out of a Mark Rothko painting, and milks every iota of expressive power from a handful of themes.« – Audio (USA)

»Music of haunting stillness. Such simplicity of sound can be as riveting as the fury of a Mahler symphony.« – Washington City Paper

11. Depart And Eternity Theme Variation I