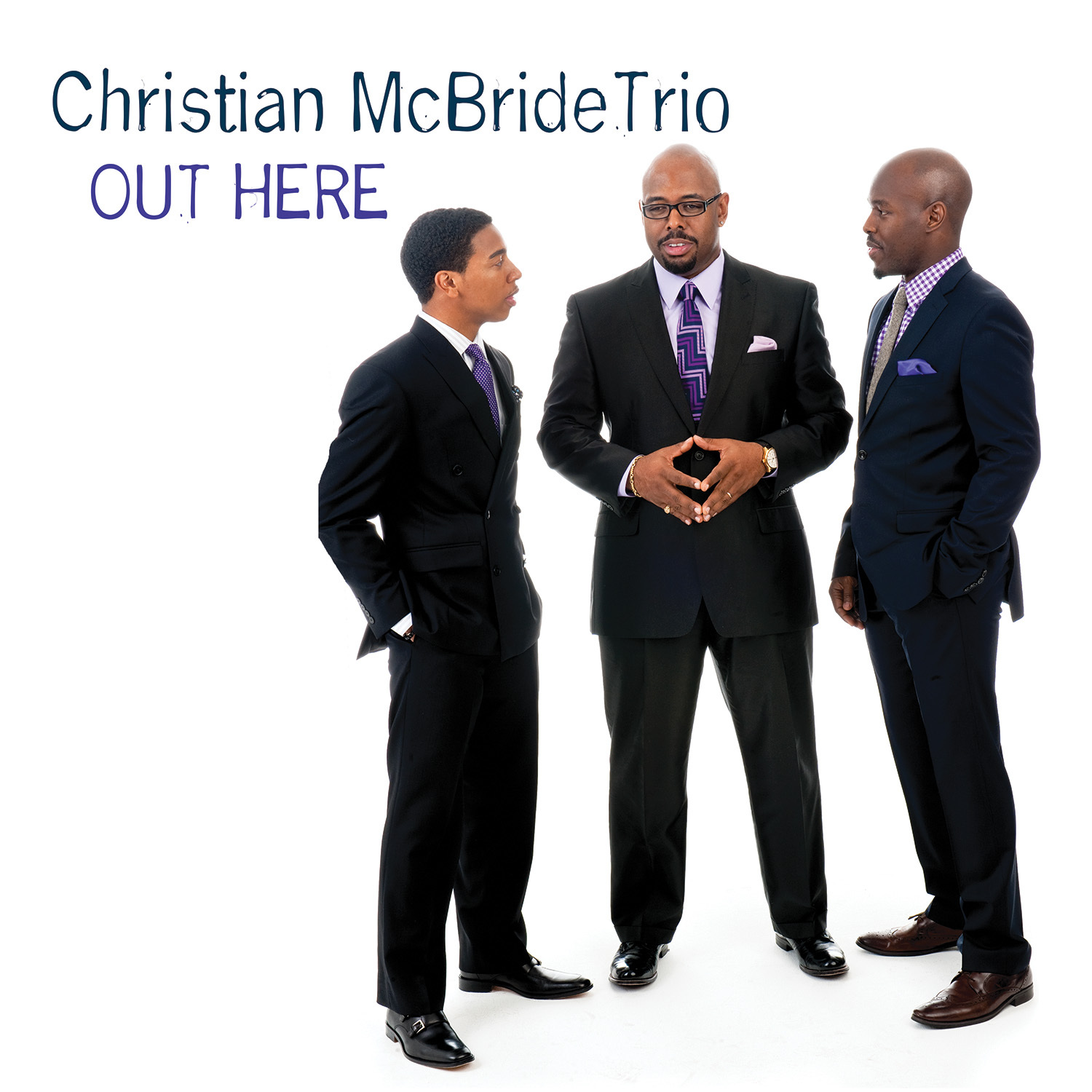 With Out Here, premier bassist Christian McBride’s fifth recording on Mack Avenue Records, McBride introduces his latest working group: a trio, fully embracing at age 41 his role as standard-bearer and mentor. Pianist Christian Sands and drummer Ulysses Owens, Jr.—both younger, emerging artists—have been performing with McBride’s smallest group for about three years, honing their trio conception to a fine point of expressive depth and nuance with select performances around the world.

“It’s a pretty diversified trio,” says McBride descriptively. “The real core foundation is hardcore swingin,’ blues and the American songbook. Part of that is because Christian [Sands] is so well-rounded and willing to go to so many places, that I can’t help but want to swing hard with him and Ulysses.”

When he hit the jazz scene like a comet at age 17, McBride’s huge, woodsy sound and precocious agility invited comparisons to the legendary bassist Ray Brown. The late jazz bassist was not only renowned for performing on classic jazz dates with modern greats from the 1940s onward, but also for his central role in trios led by Oscar Peterson as well as his own stellar trio ensembles afterward. Once McBride recorded with Brown as a member of the early ’90s group Superbass, the association was bound to stick. He loved Brown as a mentor and father figure, but avoided leading a trio because of the inevitable comparisons.

Helming a trio was the furthest thing from McBride’s mind—until an Inside Straight appearance in 2009 became a trio date due of the absence of saxophonist Steve Wilson and vibraphonist Warren Wolf. But instead of calling for replacements for two members of Inside Straight, he opted for expedience and played the gig with pianist Peter Martin and drummer Ulysses Owens, Jr.

Out Here is McBride’s 11th recording as a leader. Since the early 1990s he has recorded on over 300 dates as a sideman. Aside from relatively recent travels with Pat Metheny; Chick Corea, Roy Haynes, John McLaughlin and Kenny Garrett; the Monterey Jazz Festival on Tour – 55th Anniversary; and residencies and artistic leadership roles with organizations ranging from New York’s 92nd St. Y and Jazz House Kids to NJPAC, McBride has toured consistently for several years with his own quintet, Inside Straight. He also fronts the Christian McBride Big Band, whose Mack Avenue recording, The Good Feeling, won the GRAMMY® Award for Best Large Jazz Ensemble Album in 2012—his third GRAMMY win overall.

Owens has been a mainstay in McBride’s groups of late. He has regularly subbed for Carl Allen in Inside Straight and is the drummer for the Big Band. “Ulysses and I have a closely formed musical relationship, where we know one another’s time and feel very well,” McBride says. “I think he’s picking up the tradition after Lewis Nash. I love his combination of technique and artistry.”

McBride had his eye out for Sands ever since hearing him on Marian McPartland’s National Public Radio “Piano Jazz” program. “I knew he was a student of Dr. Billy Taylor’s. But when I heard him he floored me. It was amazing hearing an 18-year-old really dealing with the tradition. He had his technique together, and all his tempos—ballads, medium, bebop. Plus he played the blues and could get esoteric too. I thought: finally, a young player who has all of the language. It was such a relief.”

Considering the tendency of many young players to focus on complex rhythms, baroque technique, and being different for the sake of difference, hearing these three gentlemen explore jazz fundamentals with such wonder, drive and sensitivity serves as a welcome antidote. “My trio seems to be an anomaly these days,” says McBride. “I find myself, when listening to young guys on the scene, it’s very musically clever, but I’m not feeling that kind of soul satisfaction that I felt at one time. There was a time when the young guys took pride in paying tribute to the masters but still keeping their own identity and remaining within their own generation.”