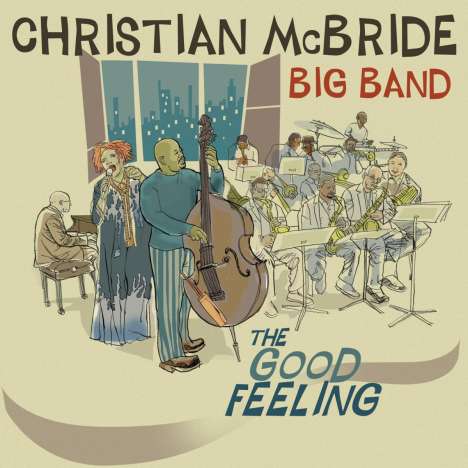 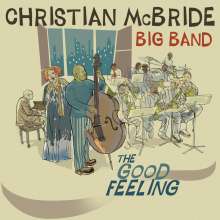 In a stellar career that continues to showcase his remarkable talents as a consummate musician, bassist Christian McBride reaches another milestone with the release of The Good Feeling, his first big band recording as a leader and newest release for Mack Avenue Records. For over 20 years, McBride has appeared in numerous musical settings with just about any musician imaginable in the jazz as well as R&B and pop worlds. From playing with the likes of Milt Jackson, Roy Haynes, Chick Corea, Herbie Hancock and Pat Metheny; to playing with and / or arranging for the likes of Isaac Hayes, Chaka Khan, Lalah Hathaway, Sting and the legendary James Brown—what has always been unique about McBride is his versatility. In addition to his work in the neo-soul arena with The Roots, D’Angelo, Queen Latifah and others, the Philadelphia native has also led his own ensembles: The Christian McBride Band, A Christian McBride Situation and his most recent group, Inside Straight (fresh off their critically acclaimed 2009 effort, Kind of Brown). There are many sides to the musical persona of Christian McBride, and The Good Feeling has him realizing another one: as the leader, arranger and conductor of his big band.

McBride’s first foray into the world of big band composing and arranging dates back to 1995, when he was commissioned by Jazz At Lincoln Center to write Bluesin' in Alphabet City, featured on The Good Feeling and originally debuted by Wynton Marsalis & The Jazz At Lincoln Center Orchestra. Since that time he has composed a number of pieces for larger ensembles including The Movement Revisited, a four movement suite dedicated to four of the major figures of the civil rights movement: Rosa Parks, Malcolm X, Muhammad Ali and Dr. Martin Luther King, Jr. At McBride’s core is The Good Feeling, his first full-fledged big band recording, and it’s presented in a truly impressive fashion.

A hallmark of this recording is its consistent energy, present from the opening track Shake ‘n Blake. With its powerful trumpet section pronouncement, the band is telling the listener, “Here we are, ready to have some fun, and we’re taking you along for the ride.” But just as important is the band’s understanding of nuance; it’s McBride’s arranging touch bringing out the best in its members, helping to create the tightly knit sound you hear throughout this recording.

Putting a big band together is no easy task, but in this particular band McBride feels fortunate to work with some of the most talented musicians in the jazz world. For his part, McBride feels that this process turned out the way he had hoped, with many musicians involved with whose work he is particularly familiar.

“[Trumpeter] Freddie Hendrix is one of the flagship guys in the big band, as is Frank Greene, along with trombonists Michael Dease and Steve Davis. (Steve and I go way back. He was one of my first calls). And the saxophone section was kind of a no brainer—Steve Wilson and Ron Blake, who have been the saxophonists in my last two working bands. I had to have those guys,” McBride says. “Now, one thing that seems to be my ‘Achilles heel’ with any band that I’ve had during my career is the piano chair, simply because everyone’s working all the time. But the X-Man, Xavier Davis, came in and did such a fantastic job.”

The repertoire on The Good Feeling features classic, “staple” tunes along with original McBride compositions—the perfect balance and platform on which to showcase the band. The selections range from easier, in-the-pocket swing—showcased on Broadway and I Should Care—to McBride's originals, many of which have been featured on the bassist's earlier recordings, now rearranged for big band. These tracks include: Brother Mister (the opening track of Kind of Brown); The Shade Of The Cedar Tree and In A Hurry (both featured on the 1995 classic Gettin’ to It); and Science Fiction (the nucleus for McBride’s 2000 effort Sci-Fi). Additionally the disc features tasteful renditions of When I Fall In Love, The More I See You and A Taste of Honey—all featuring exceptional performances by vocalist Melissa Walker.

Regarding the cut The More I See You, there are two points that McBride finds particularly appealing. “I was glad that Melissa wanted to sing the verse,” he says. “So many of the great standards that we know have verses that nobody sings, so I was glad that she wanted to sing it. And she likes to sing it at that medium tempo. Well, I couldn’t help but think Sinatra At The Sands (with the Count Basie Orchestra, arranged by Quincy Jones), so I told her ‘if you don’t mind, I’m giving this one the Sinatra treatment’.’’

McBride’s interest in writing and arranging with a performer in mind is a trait that has been integral to the success of many great leaders of large ensembles, the most notable being the Duke Ellington Orchestra, with Ellington writing for specific musicians. McBride believes that philosophy works in his big band as well.

“Once you get the guys that you want, then you can write and arrange accordingly,” stated McBride. “I’ve done that with all of my small groups. With the big band material, I had Steve Wilson in mind for Brother Mister; you’ve got Shake ‘n Blake that I wrote for Ron Blake. That song actually started out as a duo between he and I but I thought it would work well for big band, so I just took the time to expand it; I just thought that song would be perfect for him. And I’m already hearing material that would be specifically suited for Michael Dease in the future. You think about the personalities that you have in your band and you write accordingly. I think that’s what all the great band leaders have done—write music with the guys that you have in your band in mind. Because you know what will work, you know?”

This project was truly a labor of love for McBride. But the process, as exhilarating as it was, also was an eye-opening experience for him. Spending a lot of time with talented arrangers and putting this project together has given him a great appreciation of everything that it takes, all the hard work, to achieve your goal on a project like this. He sought the advice of some of the most accomplished arrangers around, such as Jimmy Heath and John Clayton; and referenced material by the likes of Oliver Nelson, Duke Ellington, Thad Jones and Don Sebesky, among others.

But in the final analysis, every big band’s unique sound and personality comes from its leader. The sound you hear on this recording has the unmistakable stamp and personality of Christian McBride. It is a larger-than-life sound, full of exuberance and power; but it also reminds you of the wonderful range of emotion and subtlety that such a large ensemble can offer.

Would he like to do it again? “Oh, absolutely, absolutely,” McBride readily answers. “I’m looking forward to writing more material, and I’m really hoping to keep this concept ‘above sea level’.” McBride also looks forward to potential opportunities to showcase the group and share the music in live settings.

As one of the most visible and talented musicians of his generation, he continues grow as an artist, and The Good Feeling is just the latest chapter in the ever evolving, constantly expanding, musical world of Christian McBride.