Charlie Haden: Land Of The Sun 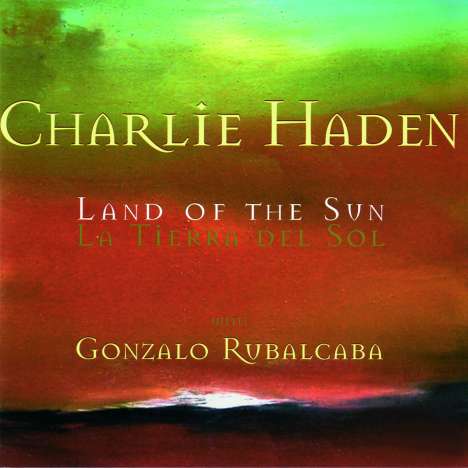 Land of the Sun had its genesis in 2003 when Haden met with Marroquin's daughter, Patricia Mendes, after a performance in Austin, Texas. Mendes thanked Haden for recording her late father's song, "Nocturnal," on Nocturne by presenting him with a gift, a folder of her father's compositions.

Haden returned home to Los Angeles and was found himself both moved and motivated by the Marroquin material. He called his longtime friend and collaborator Rubalcaba at his home in Coral Springs, Florida and said, "We should do this."

Haden sent the Marroquin songs to Rubalcaba, who set to work putting together arrangements. Haden and his wife, singer Ruth Cameron, then traveled to Miami to meet with the great Cuban pianist and begin the project. While Marroquin's songs are recognized as landmarks of Mexico's popular music, pieces such as "Nostalgia" and "Cancion De Cuna" were composed for piano and violin or flute, not jazz improvisation. Haden and Rubalcaba's task was to figure out how to reinterpret the material to suit their mission.

"It worried me at first," Haden recalls. "I thought, 'How are we going to do these in a way that the musicians can improvise?' Gonzalo and I worked on it, and he wrote these great arrangements using different flows and different pulses and different tempos."

The project received Marroquin's posthumous seal of approval when the composer's grandson, songwriter Criz Sabre, visited Haden and Rubalcaba's early sessions and noted how proud his grandfather would have been. The next step was to begin expanding the musical palette by adding different colors to the mix.

"I didn't want this record to be Nocturne II, Haden says. "The songs on Land of the Sun aren't boleros, there are all different kinds of rhythms. With that in mind, I wanted a different musical configuration - I didn't want to have violin on it. Instead, I wanted flute and especially trumpet. I haven't used a trumpet since my first record, Liberation Music Orchestra, and I definitely wanted to have one on this record because it's such a very Mexican sound."

Haden and Rubalcaba gathered together a number of musicians, with an ear towards players well versed in Latin jazz. First on their call list was drummer Ignacio Berroa, who had previously joined them on Nocturne. Next, they enlisted an array of talented veterans and newcomers, including flautist Oriente Lopez, trumpeter Michael Rodriguez, alto saxophonist Miguel Zenon, guitarist Lionel Loueke, and the wonderful tenor saxophonist, Joe Lovano.

"I'm always looking for different combinations of musicians," Haden says. "I try to bring together musicians that can make magic, and I'm usually right. It's not so much the combination as it is the individual and their values. When I find a musician that has the same values as I do, I want to make music with him."

One track - the splendid "Suno Solo Con Tu Amor" - was left unfinished, with space left for guitar to be performed by a player to be named later. As the sessions went on, the recording remained incomplete. While mixing in L.A., Haden realized that the song was too good to be abandoned.

"I said to Gonzalo, 'Man, this is such a pretty song, we don't want to lose it,'" Haden says. "I invited Larry Koonse to come over. He played the melody beautifully and improvised a solo, which is what's on the record."

While the majority of Land of the Sun takes Marroquin's songs as a template for resourceful musicality, the tender "Anoranza" is performed as originally written by Rubalcaba and Lopez.

"They just stayed with the melody," Haden says. "No one improvises at all, and it's really beautiful."

In addition to the songs of Jose Sabre Marroquin, Land of the Sun sees Haden and company performing two Mexican popular standards: Armando Manzanero's "Esta Tarde Vi Llover" and Agustin Lara's classic "Solamente Una Vez," a song which has been recorded around the world in five different languages, including English versions performed by both Frank Sinatra and Elvis Presley. The crosscultural diversity of Land of the Sun points to Haden's avowed commitment to spreading the magic of jazz to a wider audience.

"What I try to do is play all kinds of songs from all different categories," Haden says. "Songs that I think are very meaningful and beautiful, with beautiful melodies and great chord structures, in order to attract different kinds of listeners and bring more and more people to the art form. Because we need it now more than ever before.

"I want to open jazz up," he continues. "I don't want to keep the audience limited. I want to reach people who have never come to a jazz concert before. One way to do that is by making records that have a lot of different kinds of music on them."

Upon finishing the recording, Haden sent an advance copy of Land of the Sun to Patricia Mendes, who expressed the deep feelings Haden's record had brought out in her.

"She called me almost in tears," Haden says. "This music is very special for her - one of the songs was written for her when she was a baby, one of the songs her father wrote for her mother."

Land of the Sun is a rare work - music that comes from deep within the hearts of those involved resulting in something unique and unprecedented. For Charlie Haden, that instinctive, imaginative approach has been long been his guiding philosophy towards both life and music.

"I used to talk to Ornette about creating music in a way that when you play it, it's like you've never played music before," he says. "It's like you're playing for the first time. So every time you play, you're striving to create something that's never been before.

"I think we've definitely done that on this record. There's stuff on here that's revolutionary, man. This music has taken on a whole different meaning by being put it into a context of people being inspired by it and creating solos. That's what this art form is about - inspiration. That's what makes somebody play at the top of their form, to play to their full potential. That's how I get my fulfillment, by experiencing people being inspired. It's wonderful for me to be a part of it, to play the bass with it and inspire people through great bass lines, as well as to be able to sit back and enjoy it." (vervemusicgroup.com)

Charlie Haden
The Ballad Of The Fallen
CD
EUR 18,99*