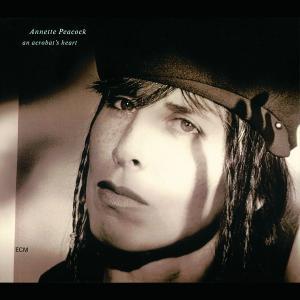 Annette Peacock
X-Dreams (Gold Vinyl)
LP
EUR 36,99*
+ Cikada String Quartet
Annette Peacock's long-awaited debut as a "leader" on ECM (she has always been a presence in the wings, as it were) is an exceptionally beautiful and emotionally involving album. Commissioned by ECM to write music for strings, piano and voice, Peacock has delivered what may be her most personal artistic statement to date. Soul-baring songs form the core of "An acrobat's heart", grown-up and ruthlessly honest songs from the combat zones of relationships, songs of experience and freedom and dependency, pages from a diary. The naked truths of Peacock's texts are set to finely-crafted settings for the Cikada quartet. The compositions, and Annette's own, unembellished piano playing, carry forward the lyrical impulses introduced into jazz when Peacock wrote the book for the Paul Bley Trio more than 30 years ago. And her unique vocal style has grown ever more keen-edged with the years; nobody phrases like her. In brief, this is essential Annette Peacock, a great original at the peak of her powers.

"An acrobat's heart" is the first new Annette Peacock album in more than a decade, although the long silence was broken in part by the release of the Marilyn Crispell Trio's critically-acclaimed Nothing ever was, anyway. Music of Annette Peacock issued by ECM in 1997. Annette guested on one track on that set; England's Avant noted that "On 'Dreams' the composer adds her distinctive vocals (cracked varnish over supple wood) and completely steals the show. The news that she's preparing material for a forthcoming ECM disc is very good indeed". Reactions to "Nothing ever was, anyway" were almost unanimously positive world-wide and the recording was voted Album of the Year in France's Jazzman magazine.

Producer Manfred Eicher first met Annette Peacock almost 35 years ago, after a concert in Montreux, where Paul Bley played her compositions. "I always liked her very personal style of writing, her songs. The simplicity, the clarity, and sometimes I've felt she was right at the essence of expression."

Pre-production for the present disc has extended over, literally, years. Peacock began working on the music in 1996 and was fine-tuning it right up until the eleventh hour. Annette Peacock: "Manfred proposed this string quartet idea which I thought was really intriguing. I told him I'd never written for string quartet, and he said that was fine with him. So I thought 'OK, go for it'. I heard [in my mind] this string quartet which was just pure sound, just bow on string... And I thought...yes!"

When she arrived at Rainbow Studio she was ready, and took instantly to the Steinway piano that ECM maintains there. "It's like a living thing", she told filmmaker Barry Hecker. "You touch it and it responds." In deference to the instrument's history, she plays it with great sensitivity and restraint.

She remains one of the most daring of singers, her choice of notes and her almost vibratoless delivery immediately arresting. (If she were a trumpeter, she'd be Miles or Chet Baker). At the same time her tone is intimate, confessional, conveys a sense of secrets whispered.

Annette Peacock was born in Brooklyn, and was initially self-taught as a musician (she studied briefly at Juilliard in the 1970s). Her mother played classical music professionally. "I was left alone a lot, and there was a piano in the house. It was a relationship that I could always rely on. So I started composing when I was four of five years old."

In the early 1960s she befriended Albert Ayler and, as Paul Bley recalls, was instrumental in bringing him to the attention of the ESP label. Ayler's bassist, Gary Peacock, became her first husband. Annette accompanied the Ayler group on its first, controversial European tour, and began to develop the music that would bring new impulses and a new sensibility to the jazz avant-garde. The first public performances of her "free form / free song" music were given by the Jazz Composers Orchestra in Hamburg.

"I chose to go in the direction of ballads, which means a lot of space," she told Impetus magazine. "it was difficult for players at the time. Drummers would say, 'What am I going to play on this''' A different style developed with the waves and the spaces and the silences. That was the concept I worked on exclusively, it was the contribution I made to free music."

For six years, Annette Peacock provided repertoire for the Paul Bley Trio, shaping "environments" - very sparsely-detailed environments - in which the musicians could create something of their own. The early ECM Bley albums, "Paul Bley with Gary Peacock" and "Ballads", issued in 1970 and 1971, give evidence of this approach. In fact, Peacock's music has been almost a leitmotif at ECM through the decades; the emphasis in her work on silences primed with musical tension, on the power of subtle persuasion, on radical understatement, is very much in line with the label's aesthetics. Critic Art Lange once observed, astutely, that "Peacock's songs invoke intensity through subtraction, favour a whisper over a shout, celebrate simple nuance and complex emotions, conjure echoes of the past with a razor sharp edge. The songs are exquisitely evocative - able to suggest a mood, whether loneliness of exhilaration, within a very few notes." For Paul Bley, Peacock's compositions have been a permanent artistic resource: he has featured Annette's music on more than 20 albums to date.

If Annette Peacock's songs have become part of the lingua franca of creative music, sightings of the artist herself, on record or in concert have been relatively rare. Four albums issued at the beginning of the 70s- "Dual Unity", "Improvisie", "Revenge" and "I'm The One" - made revolutionary use of Peacock's dark voice in tandem with synthesizers. (Peacock and Bley had been trailblazers in the world of live electronic music performance). 1972's "I'm The One" in particular attracted the attention of the rock world and musicians including David Bowie, Mick Ronson, Brian Eno and others beat a path towards Annette's door. She recorded with drummer Bill Bruford, then resumed her solo career, after a long hiatus, with "X-Dreams" in 1978 (the album featured a number of rock names including Ronson, Bruford and Chris Spedding). It was followed by "The Perfect Release", "Sky-Skating", "Been In The Streets Too Long", "I Have No Feelings" and "Abstract-Contact".

For most of two decades she was based in England, occasionally playing low profile gigs, often alone at the piano, sometimes in the company of free improvising drummer Roger Turner, sometimes with her own bands. In 1995, after a protracted absence from the concert stage, she surfaced briefly at jazz festivals, fronting a trio with Evan Parker and Barre Phillips.

Relocating to upstate New York ("in an area which has lots of childhood associations") she came to know her near-neighbour Marilyn Crispell, and they collaborated in developing the arrangements for "Nothing ever was, anyway."

Recently, Annette Peacock has renewed some of her contacts with the rock world and is at present working with David Bowie on his new album. Moving into the fourth decade of her performing career, she remains a talent that cannot be contained by a single idiom.

The Cikada String Quartet is a splinter group of the Cikada Ensemble which was formed in Oslo in 1989 and which has played, to enthusiastic press notices, at the ISCM World Music Days in Norway, Mexico and Germany and at the Oslo Ultima New Music Festival and toured widely. As an autonomous unit in its own right, the Cikada String Quartet has recorded several albums, the most recent being "Black Angels", titled after the George Crumb composition of the same name. The musicians have enjoyed close associations with contemporary composers including Crumb, Magnus Lindberg, Rolf Wallin, Tristan Murail and Bent Sørensen, on whose ECM New Series "Birds and Bells" CD they also appear. But the Cikada players are also noted for unusual open-mindedness and welcome explorations into other genres. Their ECM credits include work with Norwegian jazz bassist Arild Andersen (on "Hyperborean") and with Swedish folk violinist Mats Edén (on "Milvus"). These were the recordings that first made Annette Peacock aware of the Cikada Quartet.