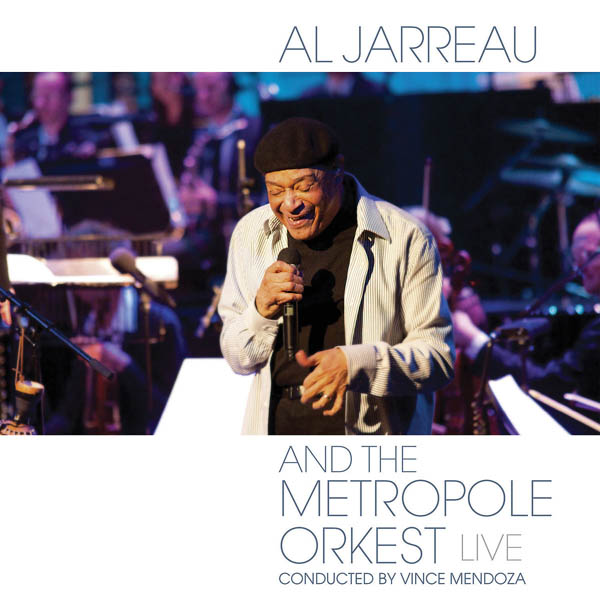 Al Jarreau has little interest in boundaries or preconceived limitations. Since the mid-1970s, this versatile singer has applied his distinctive and instantly recognizable vocal style - a unique combination of lyrical swing and captivating vocalese - to a broad spectrum of musical genres. With this eclectic approach, he has earned much success along the way - enough to position him as the only vocalist in history to claim Grammy Awards in the three distinct genres of jazz, pop and R&B.

After nearly five decades of recording and performing, at an age when many artists are coasting if not retiring altogether, Jarreau continues to take his music to new and different places, literally and figuratively. The most recent chapter in this journey is Al Jarreau and the Metropole Orkest - Live, a collection of the best performances from a two-night engagement at the Theater aan de Parade, located in Den Bosch, Netherlands. The recording finds Jarreau onstage with a 53-piece orchestra from northern Europe whose collective expertise encompasses the best elements of classical music, American jazz and all the nuanced places in between. Al Jarreau and the Metropole Orkest - Live is set for release on Concord Records.

Led by conductor and arranger Vince Mendoza (winner of numerous Grammys in his own right), the album makes its way through 11 songs from Jarreau's vast body of work - but this time with full orchestral arrangements that force even the most die-hard Jarreau fan to hear them in a new way.

"A lot of people will have heard these songs before, but never in quite this way," says Jarreau. "This orchestra places them in an entirely new setting. There are new phrases and interpretations here. There are solos that they didn't hear on the original recordings. What comes through loud and clear is that you can reinvent and reinvigorate and restore existing music and make it into a completely contemporary experience."

Making the old new again is what Jarreau has been doing with music since his childhood in Milwaukee, Wisconsin. Born in 1940, he sang his first songs in his church choir (his father was a vicar). Although armed with a degree in psychology and some early career experience in social work, he made a dramatic career change when he moved to Los Angeles and began singing in small clubs along the West Coast.

Although he recorded an album in the mid ‘60s, he didn't make his first significant mark on the music scene until the release of We Got By in 1975. Early praise from the critics translated to commercial success in 1981 with the release of Breakin' Away, the 1981 album that generated the hit single, "We're In This Love Together." He made a huge and recurring splash in American living rooms a few years later when he recorded the theme music to Moonlighting, the hit TV series that ran through the latter half of the 1980s and continues in syndication to this day.

Jarreau enjoyed moderate success in the following decade with albums like Heaven and Earth (1992) and Tenderness (1994), then got a boost in 1998 when he reunited with producer Tommy LiPuma, with whom he'd recorded We Got By more than a decade earlier. The Jarreau / LiPuma partnership resulted in a string of successful albums, including Tomorrow Today (2000), All I Got (2002) and Accentuate the Positive (2004). Givin' It Up, his 2006 collaboration with George Benson, resulted in two Grammy Awards.

For all of Jarreau's studio successes over the decades, Al Jarreau and the Metropole Orkest - Live offers recorded proof that he's still a master in front of a live audience as the frontman to a fully staffed orchestra. The set leads off with the lively and energetic "Cold Duck," a song that Jarreau considers a favorite from early in his career. "I remember first hearing this piece of music by Eddie Harris in the late ‘60s and early ‘70s, and I eventually created a lyric for it," he says. "It's become a very important piece of music for me over the years."

The melodic followup track, "Jacaranda Bougainvillea," was written in 2002 and inspired during one of Jarreau's many trips to South Africa, at a time when apartheid had recently come to an end and a new era of equality was finally dawning. "I came upon this jacaranda tree with this bougainvillea vine wrapped all around it," he recalls. "I saw poetry there. I thought, ‘My God, those things normally grow in their own space - one over here and one over there - but there they are, all intertwined in a sort of harmonic coexistence. That's a sign.' I was inspired to write about that and sing about that as a metaphor for the new South Africa."

Further into the set, Jarreau's rousing rendition of his most recognizable hit, "We're In This Love Together," is enhanced by a richly arranged string section and the solo work of tenor saxophonist Leo Janssen. "You would think that I'd get tired of singing that song, but I don't," says Jarreau. "When I look at any audience, I see two- or three-thousand reasons to sing it differently than I did the night before. If I look at any of those faces - or all of them - I'm compelled to sing it in some way that's new for them and for me."

"Midnight Sun," a composition by Sonny Burke, Lionel Hampton and Johnny Mercer - and embellished here by a beautiful solo from trumpeter Ruud Breuls - is a gentle ballad that stretches back to some of Jarreau's earliest musical memories. "I've been singing this composition since I was nine years old," he recalls. "No nine-year-old should be able to sing that. It's enough of a challenge for professional singers to sing those intervals. But I was singing it when I didn't know any better. So my musical history is in that song."

The playful and rhythmic "Scootcha-Booty" is a song that emerged from an informal songwriting session back in the 1980s with keyboardist and composer Russell Ferrante, founding member of the Yellowjackets. "We came up with this melody that we called ‘Scootcha Booty,' which is a title I really love. The lyric didn't get completed until I made Accentuate the Positive eight years ago. It appears for the first time on that record. So the song actually started taking shape thirty years ago, but wasn't really finished until just few years ago. That kind of extended incubation period isn't uncommon for me."

The set closes with the exotic sounding "Spain (I Can Recall)" is a song based on a Latin melody and rhythms originally conjured by Chick Corea, Artie Maren and Joaquin Rodrigo. The song is propelled by Jarreau's staccato lyric line and smoldering solo work by trombonist Bart van Lier and Janssen on tenor sax.

Whether he's performing songs from his own body of work, taking the work of past masters and making it his own, or creating something from the gray area in between, Al Jarreau consistently and continuously approaches melody and harmony from a fresh perspective - one that dispenses with externally imposed boundaries and limitations - and creates something entirely new. This process unfolds in real time on Al Jarreau and Metropole Orkest - Live.

"That process is youthful, it's restorative, it's healing, it's inspiring," he says. "I walk offstage, and I know I'm healed in some kind of way. And I know there are people in the audience who will walk away from the show feeling the same way. I highly recommend finding something that you love to do, and would do for free, and if you can turn it into a way to make a living, do that. But if you can't, still find an opportunity to do that thing that you love - that thing that gets you up in the morning and makes you feel excited about your day and about your life. It's the thing that makes you fully human."