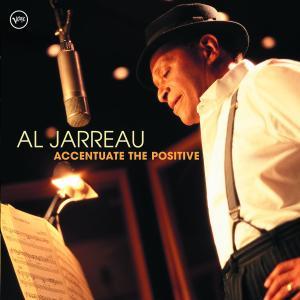 Bewertung:
Nur noch 1 Stück am Lager.
EUR 12,99*
Versandkosten
+ Larry Williams, Tollak Ollestad, Anthony Wilson,
Christian McBride, Mark Simmons
With "Accentuate the Positive" vocal legend Al Jarreau reunites with producing great Tommy LiPuma for the first time since their magical work together on Jarreau’s Glow (1976) and their Grammy-winning live album Look to the Rainbow (1977). This session in elegant small-group jazz settings is both a return and a departure for Jarreau, whose two previous albums on GRP, Tomorrow Today (2000) and All I Got (2002), were critically-acclaimed, high-charting discs in the pop / R&B/smooth jazz vein that he has mined with great success since the early ’80s.

Jarreau is one of the most distinctive and irrepressibly individual singers in the world, and although the arrangements and instrumentation of Accentuate make it Jarreau’s first “jazz”-oriented recording since 1977, Jarreau fans will find all the hallmarks of his signature style: gravity-defying scatting, churchy funk, cool swing, torrid blues, spellbinding ballad singing, and a life-affirming sense of play. But what LiPuma has achieved with this album, with a stellar band, beautiful arrangements, and impeccable production is an incomparable intimacy — he brings the listener right into the heart of Jarreau’s extraordinary vocal art as never before.

The result is a revelation — in this more open and acoustic production setting, Jarreau’s extraordinary skill and accomplishment as a vocalist are stunningly evident. In the way he draws the arc of a phrase, how finely he colors a lyric, how true his pitch, intonation and diction are — it’s clear that he is not only one of the most spontaneous and soulful singers on earth, but also one of the most technically accomplished. This is especially apparent in his inspired performances of the well-chosen standards on Accentuate the Positive which prove him to be an exquisite ballad singer and a jazz man with an irrevocable sense of swing.

The lingering caress of his voice on a tender and vulnerable rendition of “The Nearness of You” is as romantic as anything he has ever done. On “Beginning to See the Light”, Jarreau swings with a savvy cool that channels the infectious panache of the Sinatra / Martin / Davis Jr. Rat Pack. A gorgeous bossa nova arrangement of “My Foolish Heart” is breathlessly intimate, as Jarreau spins lines of melody in his boyish upper range, evoking one of his heroes, Johnny Mathis, and then unfurls a delightfully inventive scat session that is pure Jarreau. On “Midnight Sun” he delivers the beautiful descending lines in a single silken stream while making every word of poetry ring in a masterful reading of this enchanting classic, wonderfully embellished with Tollak Ollestad’s nostalgic harmonica. And Jarreau lets loose and dazzles in his ebullient, funky, voice-popping, “one-man-band” mode on “Ac-cent-tchu-ate the Positive”.

Throughout Jarreau’s recording career he has steadily amassed a body of work as a lyricist, often setting his skillful lyrics to landmark jazz instrumentals. Accentuate opens with a funky, soul-inflected version of saxophonist Eddiie Harris’s 1969 soul-jazz hit “Cold Duck Time” with Jarreau’s playful words paying tribute to Harris. A beautiful homage to Betty Carter has a dreamy, fairy-tale quality with whimsical verses by Jarreau set to a waltz by Freddie Ravel and Jarreau salutes bebop with all the percussive resources of his voice with all-out scatting and bubbling patter lyrics to an exuberant arrangement of Dizzy Gillespie’s “Groovin’ High”. “Lotus” features Jarreau’s meditative, zen-like lyric to Don Grolnick’s original “Lotus Blossom”, highlighting the clarion, horn-like qualities of his voice. He ends the album with the funky, irreverent “Scootcha Booty” which, like “Cold Duck”, reminds listeners of his heavyweight R&B credentials.

Tommy LiPuma’s unerring taste — from his partnership with ace recording engineer Al Schmitt, to the beautiful arrangements by Larry Williams and the extraordinary level of musicianship of the instrumental players — has provided a musical setting fit for a legend. Accentuate the Positive is a landmark recording that celebrates the incandescent vocal art of Al Jarreau.