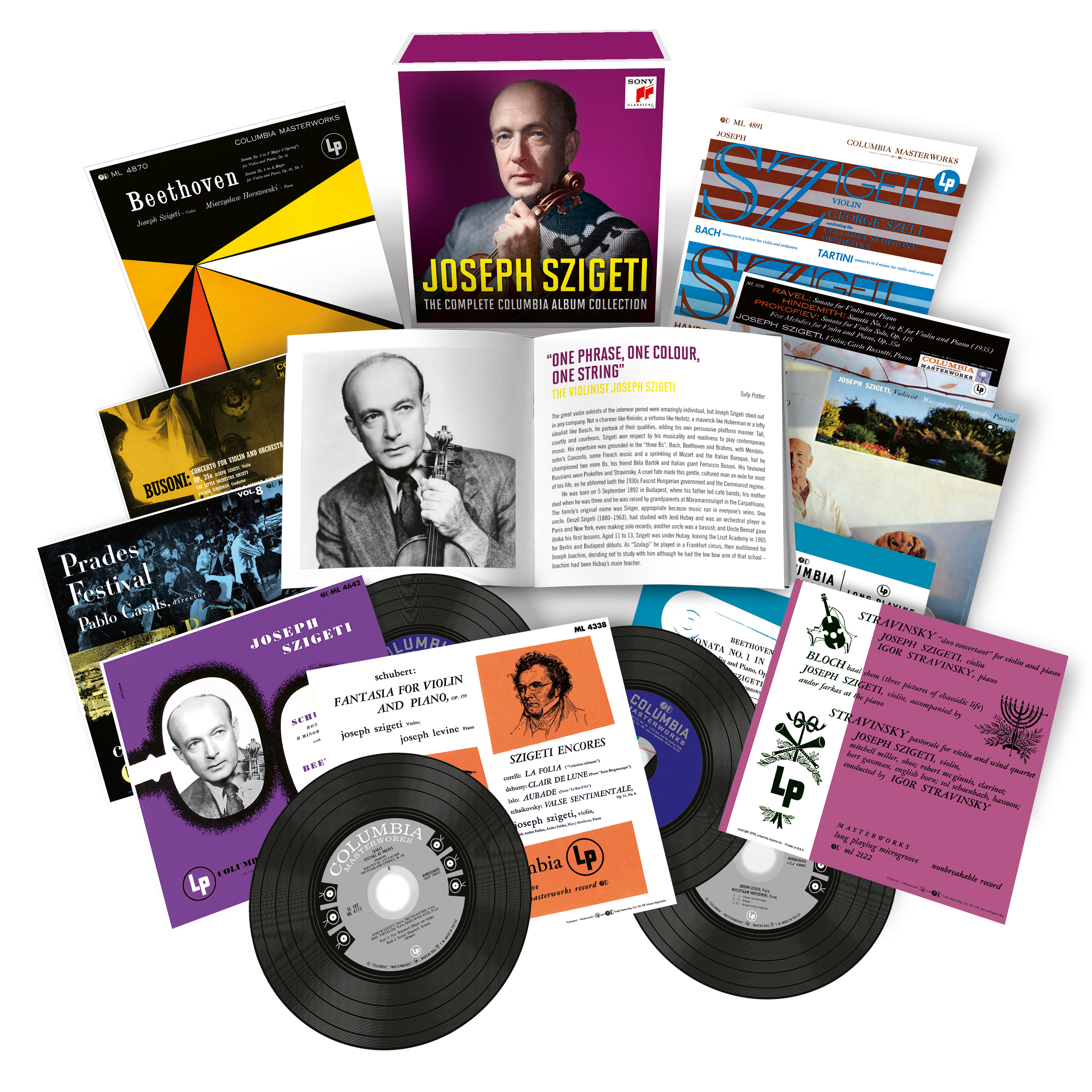 Sony Classical is pleased to announce the release of a 17-CD box set collecting the recordings made between 1940 and 1956 for American Columbia by the renowned Hungarian violinist Joseph Szigeti. Szigeti had a remarkable career. Born in 1892 in Budapest, where he studied with Jenő Hubay, one of most celebrated virtuosos and teachers of that golden era of violin playing, he was praised by the iconic German violinist Joseph Joachim at his Berlin debut in 1905; lived in London for several years following his acclaimed 1907 debut and played chamber music with, among others, Myra Hess and Ferruccio Busoni; was a frequent visitor after the war to the Soviet Union, where he introduced Prokofiev’s First Violin Concerto; made his triumphant American debut at Carnegie Hall under Stokowski in 1925; toured the world during the 1930s before finally settling in the US in 1940. It was in that year that Szigeti renewed his friendship with fellow Hungarian émigré Béla Bartók, and in April the two gave a now-legendary recital in Washington which featured Bartók’s First Violin Rhapsody of 1928 – a work dedicated to and premiered by Szigeti in Europe. In May 1940, Columbia recorded their interpretation of this “vehicle for Szigeti’s biting and wholly magnificent fiddling” (MusicWeb International) in New York. That performance appears here for the first time on CD, along with another important work by Bartók, the classic first recording of his Contrasts for clarinet, violin and piano, written for and performed with Szigeti and Benny Goodman. The rest of the new collection displays many more treasures of Szigeti’s passionate dedication to chamber music: in Bach, Handel, Tartini, Mozart, Beethoven, Schubert, Brahms, Dvořák, Debussy, Ravel, Bloch, Busoni, Prokofiev, Stravinsky and Henry Cowell, collaborating with such artists as Andor Foldes – another Hungarian émigré – as well as with Mieczyslaw Horzowski, Myra Hess, Pablo Casals and Igor Stravinsky. There are, of course, major orchestral works represented in the new Szigeti edition, including two towering concertos in D major – the Brahms, recorded in 1945 with Eugene Ormandy conducting the Philadelphia Orchestra, and the Beethoven, recorded in 1947 with Bruno Walter and the New York Philharmonic (“an account of impassioned grandeur” – MusicWeb International) – along with Busoni’s early Violin Concerto in D major, recorded in 1954 with Thomas Sherman conducting the Little Orchestra Society. Szigeti’s numerous Bach concerto recordings for Columbia are here as well, conducted by Casals, Fritz Stiedry and George Szell. As Nathan Milstein, one of his great colleagues, said in a touching tribute to Szigeti, who died in 1973: “He was an incredibly cultured musician. Actually, his talent grew out of his culture. … I always admired him, and he was respected by musicians.” In his late years, Joseph Szigeti finally got the appreciation he deserved from the general public as well. Sony Classical’s new collection his Columbia recordings, many never before released on CD at Sony Classical, can only further enhance that appreciation