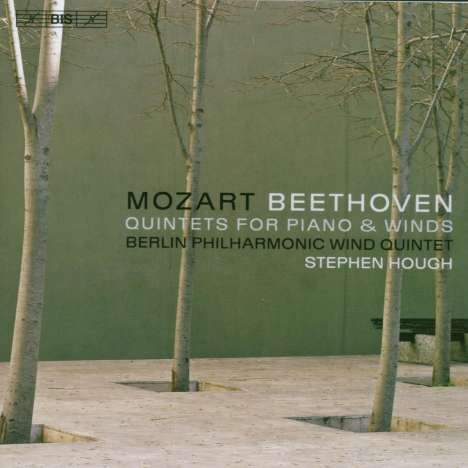 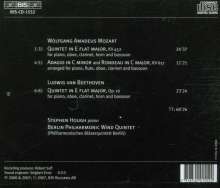 Nur noch 1 Stück am Lager. Danach versandfertig innerhalb einer Woche (soweit verfügbar beim Lieferanten)
EUR 19,99*
Versandkosten
On this disc one of the world’s finest pianists encounters one of the world’s greatest wind quintets, performing two very special works: Mozart’s and Beethoven’s quintets for piano and winds. The unusual scoring has led these works to be performed less often than they deserve: indeed, in 1784 Mozart wrote about his work to his father Leopold stating that ‘I myself consider it to be the best thing I have ever written’. Twelve years later, Beethoven composed his Quintet, which he also arranged for the standard piano quartet combination. Beethoven must have been familiar with Mozart’s work: the choice of the same key and the same formal structure (down to small details) cannot be purely coincidental. In both works the piano plays a central role: Mozart’s piano writing corresponds in terms both of style and of difficulty to that found in his piano concertos, and in Beethoven’s quintet the virtuoso element in the piano part is even more pronounced. This is still chamber music, however, with the four wind instruments not only serving as a sort of miniature orchestra but also – each in its own specific way – appearing in dialogue with the piano and the other wind instruments. While the Beethoven Quintet is a new recording, the Mozart works on this disc have been previously released, on BIS-CD-1332. On its release in 2000 that disc was highly praised, for instance in Gramophone, which called it ‘a real Mozartian experience’ and in American Record Guide: ‘The best recording of Mozart's Quintet I have ever heard.’ According to Le Monde de la Musique, ‘by the clarity, the subtly applied abundance of inflexions and a very real inner power’ the musicians proved themselves ‘true Mozartians’. As this disc will show, they are no less true Beethovenians!