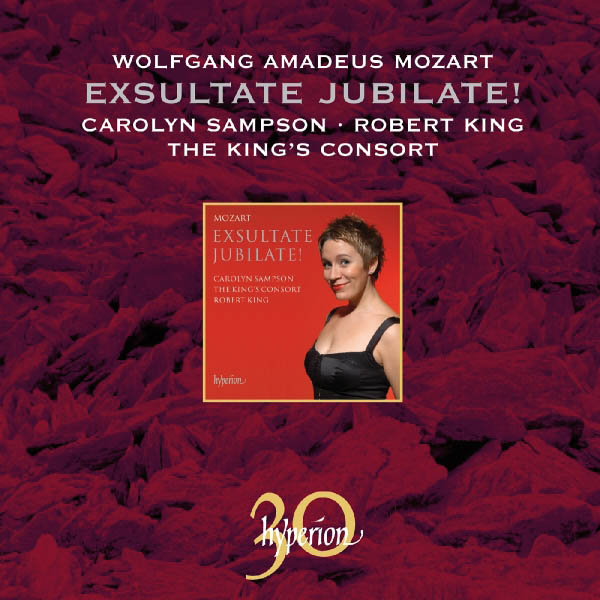 This recording presents a Mozartian showcase for the extraordinary talents of Carolyn Sampson, and is also something of a rarity, the repertoire all dating the composer’s time in Salzburg. Two Regina caeli settings (for soprano, chorus and big orchestra), written whilst Mozart was still only in his mid-teens, are extremely fine—but not so often heard and even less often recorded. This is superb music: triumphant outer movements and heartfelt, more introspective inner sections which find Mozart at his most ardent.

Exsultate, iubilate has, of course, been performed and recorded widely, but usually in the ‘Milan’ version; here we record the rarely heard ‘Salzburg’ version, which has a different orchestration (delicate flutes instead of oboes giving a very different colour) and different words. It ends, of course, with the wildly famous, virtuosic ‘Alleluia’.

These three works make substantial pillars for the disc. But there is much more! A series of shorter jewels, including three of the greatest movements for solo soprano taken from larger sacred works: the hugely famous ‘Laudate Dominum’ from the Vesperae solennes de Confessore (which could be by Verdi, with its amazing soft chorus entry part of the way through), the utterly ravishing ‘Agnus Dei’ from the ‘Coronation’ Mass, and a cheerful and less often heard ‘Laudate Dominum’ from the Vesperae solennes de Domenica with a cheery organ solo duetting with the voice.

Finally we have a very rarely heard duet, Sub tuum praesidium, where, thanks to the wonders of technology, Carolyn duets with herself—surely no two sopranos have ever duetted more perfectly, and it is a glorious piece of writing.

Reviewing the concert prior to the recording sessions for this disc, Geoffrey Norris wrote in The Daily Telegraph that The King’s Consort and Robert King displayed ‘an unerring understanding of Mozart’s sublime thrills’ and that ‘Carolyn Sampson produced pure streams of coloratura’.

,,lustrous and engaging performances" (The Scotsman)

,,Sampson's ravishing soprano has all the sparkle and purity this music needs, and the King's Consort under Robert King provides a lively foundation" (The Financial Times)

,,What more could you want in these works than a soloist who places every note with joyous precision, moves from one to another so cleanly, and demonstrates at every turn such intelligent but unfussy musicianship? This is a sunny and unpretentious disc which deserves to be among the successes of the Mozart year" (Gramophone)

,,these devotional scores are models of understatement. Sampson floats exquisitely through the Agnus Dei of the Coronation Mass, maintains a serene line in Laudate Dominum from the Vespers, unearths two long settings of Regina coeli and indulgently duets with herself in Sub Tuum Praesidium" (The Times)