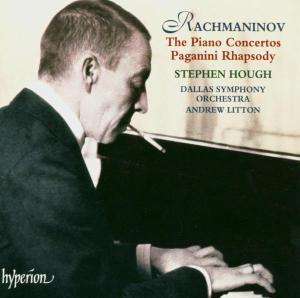 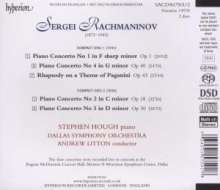 Ever since we started working with Stephen in 1996 recording these concertos has been on the agenda: it’s probably been the project closest to his heart. But it took several years before we found the orchestra and conductor that we felt would do justice to this important project.

The combination of Dallas and Litton offers a conductor who adores Rachmaninov (he has recorded all the symphonies) and understands the works from a pianist’s perspective, an orchestra with a glorious and old-fashioned string sound of the kind with which the composer would be familiar, a hall to record in which is one of the best in the world, and let’s not forget Stephen Hough who has already won two Gramophone ‘Record of the Year’ accolades for his concerto recordings. As the results here triumphantly show, all our hopes have been fulfilled, and more.

Apart from the ‘Paganini Rhapsody’, recorded after a concert performance, these are essentially ‘live’ recordings. Over a period of eighteen days eleven concerts were given, with each concerto being played several times. From these we have pieced together an ‘ideal’ performance—free of coughs, noises and the few musical mishaps which occurred, but still capturing the excitement of what was, by common consent, a sensational series of concerts.

These days a new recording of the Rachmaninov concertos has to be very special for it to be worth doing at all and it was not lightly that Hyperion proceeded with this project. Stephen’s very conscious return to the fast and lean performance tradition of the composer himself, avoiding the sentimental ‘Hollywood’ approach that has become so prevalent, coupled with the supreme level of the performances themselves has truly created a Rachmaninov cycle for the new millennium!

'These are exhilarating performances, freshly conceived and texturally pristine … With such committed advocacy and technical bravura, Hough's interpretations demand to be heard' (The Sunday Times)

'the freshness and joy in rediscovering well-worn masterpieces are everywhere in evidence in Hough's playing … If you think you have heard these pieces once too often, this is the recording to help you rediscover their intimacies and their emotional sweep' (The Daily Telegraph)

'Hough. Litton. Rachmaninov concertos. Hyperion. Already a mouth-watering prospect, is it not? So, like the old Fry's Five Boys chocolate advert, does Anticipation match Realisation in these five much recorded confections? The answer is 'yes' on almost every level' (Gramophone)