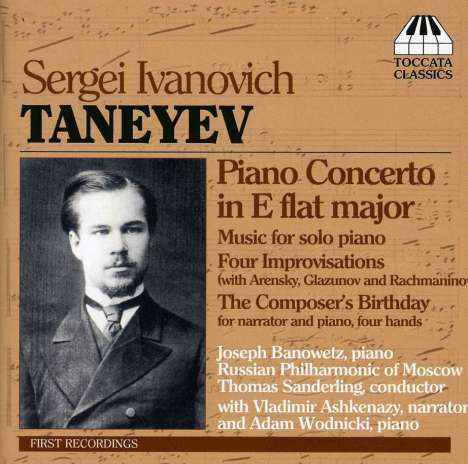 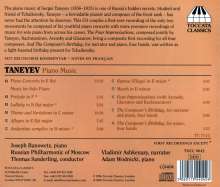 umgehend lieferbar, Bestand beim Lieferanten vorhanden
EUR 15,99*
Versandkosten
he piano music of Sergei Taneyev (1856–1915) is one of Russian’s hidden secrets. Student and friend of Tchaikovsky, Taneyev – a formidable pianist and composer of the front rank – has never had the attention he deserves. The CD couples a first-ever recording of the only two movements he recorded of his youthful piano concerto with more premiere recordings of music for solo piano from across his career. The Four Improvisations, composed jointly by Taneyev, Rachmaninov, Arensky and Glazunov, bring a composite first recording for all four composers. And The Composer’s Birthday, for narrator and piano, four hands, was written as a light-hearted birthday present for Tchaikovsky.

"The prize here is a sampling of Taneyev’s piano music, which sounds like a cross between Schumann and Tchaikovsky.​ Mr.​ Banowetz plays gorgeously, with a warm, unforced tone and natural expressivity.​ He’s joined by faculty colleague Adam Wodnicki in Taneyev’s short, four-hands birthday tribute to Tchaikovsky, performed both with and without narration (spoken in Russian by Vladimir Ashkenazy).​" (Dallas Morning News)

"This is an extremely worthwhile disc to explore, and hopefully it will be the first of many to bring Taneyev back into the spotlight.​" (International Piano)