Serge Tanejew: Kantate Nr.2 op.36 "At the Reading of a Psalm" 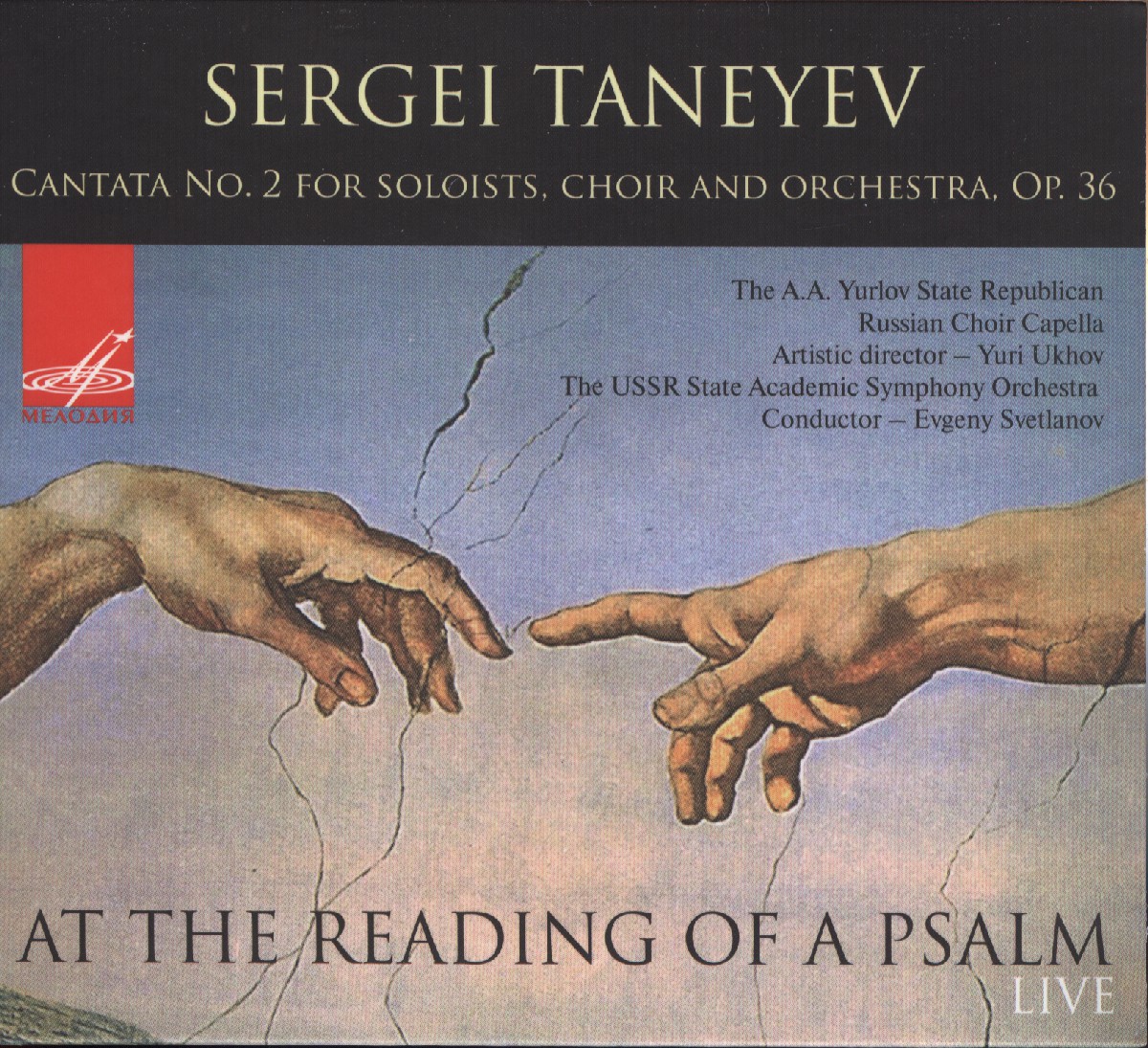 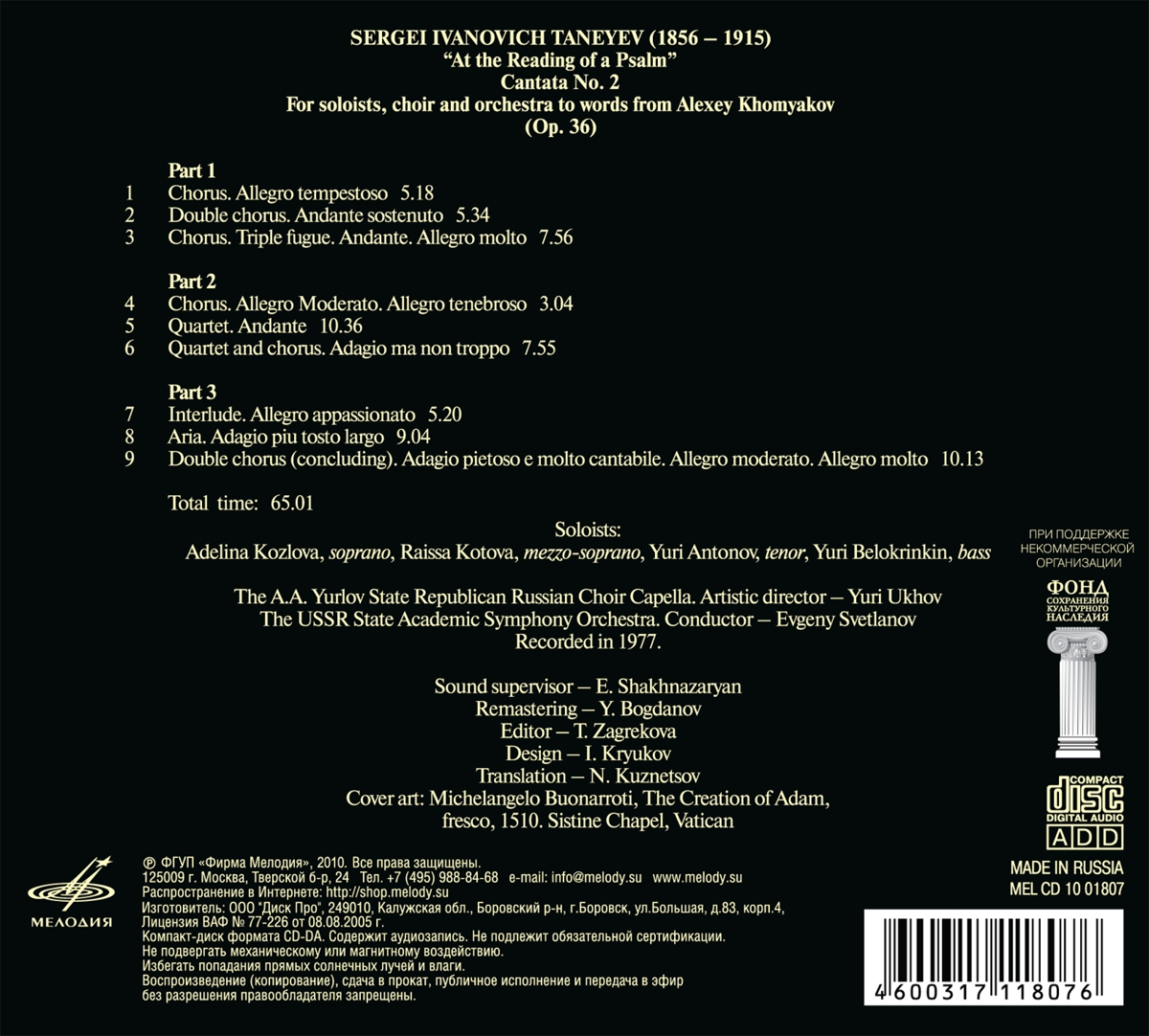 The outcome of Sergei Ivanovich Taneyev's career is grandiose and majestic. He was a unique personality and one of the key figures of the Russian music of the late 19th – early 20th centuries. Being a greatest composer, pianist, philosopher and thinker, a person who had encyclopedic knowledge, an outstanding educator and the first Russian music theoretician – "this truly high priest of his art," as Sergei Rachmaninov put it – he achieved the highest results in every area of his many-sided activity and in many ways defined the evolution of the domestic artistic culture.

Taneyev's composing heritage is vast. He composed in almost every genre typical for his time, but his most significant achievements were in the choir and cantata genres.

The cantata At the Reading of a Psalm (1812 – 1814), a monumental canvas in the genre of vocal and symphonic music, composed to the poetry by Alexey Khomyakov was an embodiment of Taneyev's prominent professional achievements in the operatic, symphonic, choir, chamber vocals, and chamber instrumental genres, as well as a summit of his polyphonic craftsmanship, a result of his scientific effort in the field of history and theory of counterpoint.

However, the cantata is not only a masterpiece of the composer's paramount artistic skills. "It wouldn't be an exaggeration to say that morally this personality is an unconditional perfection," as Pyotr Tchaikovsky described his favourite pupil. For many years Taneyev carefully studied philosophy, history of religion and culture, so that his understanding of the world order, moral life of an individual, his philosophical, religious and ethical views were reflected in the composition that crowned the course of his human and creative life.

A poem by a Russian poet and philosopher Alexey Khomyakov (1804 – 1860) of the same name was a poetic basis of the cantata. It was an artistic interpretation of Psalm 49 of David containing a generalised idea of the meaning of human existence which was not passive admiration for the Almighty but the one and only 'precious gift' – an assertion of a moral ideal of life.

As it was in the Psalm, in its versification God appears before people and speaks with them. The Lord rejects the gifts made by the people: doing so, they only return something that God gave them. All gifts are senseless when a human fails to follow the divine commandments.

The unity of the deepest content and musical dramatics creates an integral and monolithic composition making the cantata one of Taneyev's works described by Boris Asafiev as being "on the verge of making music a philosophy intellectually." Accessing the topic of eternal and undying values, Taneyev implements it as a sublime and monumental form requiring a colossal performing ensemble. The cantata's apotheosis is a massive double chorus in the conclusion written to the words expressing its central idea: "I need a heart purer than gold and a will strong in the labour. I need a brother who loves his brother. I need the truth when judgment comes." Being a piece with the deepest meaning, the cantata became the composer's spiritual entrust and the first Russian cantata having a philosophical idea. The scale of the ideological concept combined with its perfect interpretation in music made it a composition which significance cannot be overestimated not only for Russian music, but for artistic culture as a whole.

Evgeny Svetlanov (1928 – 2002), People's Artist of the USSR (1968), a greatest Russian conductor, as well as a composer, pianist, publicist, and public figure. After finishing the Gnesin Institute as a pianist (piano class of M. Gurvich, composition class of M. Gnesin), in 1951 he entered the Moscow State Conservatory (composition class of Y. Shaporin, conducting class of A. Gauk). From 1955, a conductor, and in 1963 – 65, chief conductor of the Bolshoi Theatre of the USSR. In 1965, Svetlanov became the artistic director and chief conductor of the USSR State Symphony Orchestra. Led by Svetlanov, the orchestra enjoyed the status of one of the best orchestras of the world and was given the title 'academic' (1972). In 2006, the State Orchestra was named after Evgeny Svetlanov. Evgeny Svetlanov was a world-recognized interpreter of the works by Russian, West European, Soviet and contemporary composers. He conducted the first performances of many of the works. He recorded all symphonies by Brahms and Mahler, symphonic compositions by Beethoven, Schubert, Schumann, Dvořák, Grieg, Saint-Saens, Bloch, Elgar, Tchaikovsky, Shostakovich, Prokofiev, Shaporin, Khachaturian, Sviridov, Kabalevsky and Eshpay.

The A. A. Yurlov State Academic Choir Capella is one of the best known and oldest Russian music collectives. The choir was founded at the turn of the 19th century by a talented precentor Ivan Yukhov. The choir gained its official status in 1919, and in 1942, the Republican Russian Choir Capella was created on its basis.

The most important period of the Capella is connected with the name of Alexander Yurlov (1927 – 1973), an outstanding musician and the People's Artist of the USSR who became the leader of the Capella in 1958. Thanks to his efforts, the Capella achieved the highest musical level and won the status of the one of the best music collectives of the country. After a long interval, Yurlov returned some of unique monuments of the Russian choir culture into the Capella's repertoire, uncovered a huge stratum of previously forgotten Russian sacred music to the listeners both in his home country and abroad. Many compositions by his compatriots were performed by the Cappella for the first time. Those were some of the most complicated works by Igor Stravinsky, Alfred Schnittke, and Rodion Shchedrin. The Capella also collaborated with the greatest Russian composers Dmitri Shostakovich and Georgy Sviridov. In 1973, after Yurlov's passing, the Republican Academic Russian Choir Capella was given his name.

The Yurlov Capella now is one of the most famed Russian music collectives. Its repertoire includes virtually all compositions of the cantata and oratorio genre of Russian and West-European music, many of which are recognised models of choir performing art.

The Honoured Art Worker of the RSFSR Yuri Ukhov (1937– 2007), one of Yurlov's pupils, was a choirmaster of the Capella from 1964. After the death of his teacher, he headed the Capella for eight years until 1981. The Capella performed Taneyev's monumental cantata At the Reading of a Psalm for the first time when it was led by Ukhov.