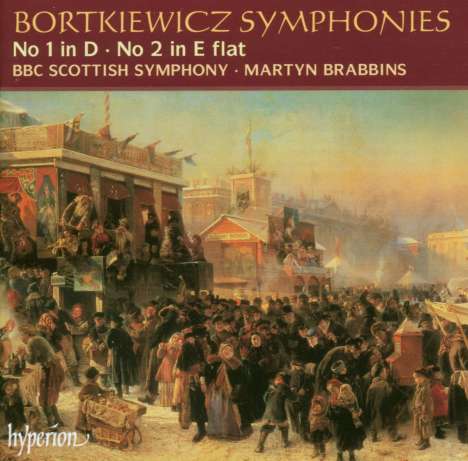 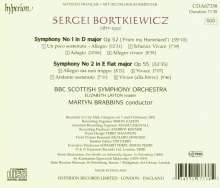 Collectors of our Romantic Piano Concertos will already know the name of Sergei Bortkiewicz and just a small something of what to expect of this first recording of his two symphonies. Martyn Brabbins and the BBC Scottish played the First Symphony in a public concert the day before this recording was made. Here is what The Glasgow Herald said of the occasion:

"Last night the one-man Tchaikovsky tribute band, Sergei Bortkiewicz, roared into town with his first symphony and left the BBC SSO, conductor Martyn Brabbins, and the audience, with grins as wide as the Volga … fabulous orchestration, thoroughgoing craftsmanship, and an exuberant panache that raised the whole thing several storeys above mere pastiche. It's a dazzling, hugely enjoyable barnstormer with a gorgeous slow movement (containing an oboe theme to die for), and a punch line so familiar, yet so unexpected, that it's uproarious. Someone tell the London gaffer to put this in the Proms—it would blow the audience clean away."

'The music is sincere, well made, instantly communicative. I enjoyed making its acquaintance, and I don't doubt you will' (International Record Review)