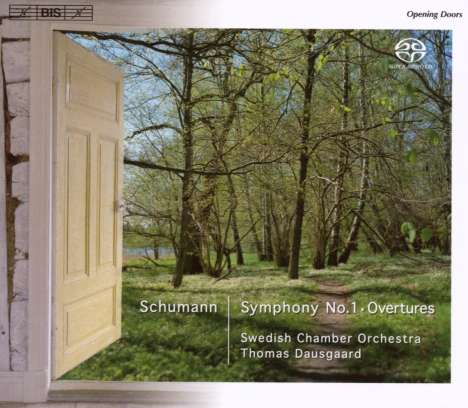 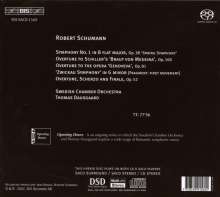 versandfertig innerhalb von 1-3 Tagen
(soweit verfügbar beim Lieferanten)
EUR 19,99*
Versandkosten
This disc includes Schumann’s very first endeavours in the symphony genre, beginning with the Zwickau Symphony from 1832-33. Of the two completed movements, only the first was ever performed in the composer’s lifetime. That is also the one recorded here, performed from a copy of the manuscript score. (The autograph score of the second, slow movement exists in private ownership, but a readily performable original material has yet to be produced.) Almost ten years after the ‘Zwickau’, Schumann finally completed a symphony, the ‘Spring Symphony’. Inspired by a poem by Adolf Böttger, Schumann nevertheless dispensed with the original movement titles before the symphony was published. Composed in the same year as Symphony No. 1, the Overture, Scherzo and Finale to some extent also belongs to Schumann’s symphonic oeuvre – a divertimento-like sequence of movements, which Schumann actually offered to a publisher as his ‘second symphony’, with the comment that it differed ‘from the form of a symphony in that it is also possible to play the individual movements separately’. The programme is completed by two overtures: one composed for Genoveva (Schumann’s only opera) and the other for Schiller’s tragedy ‘The Bride of Messina’.

The present disc is part of a recording project entitled Opening Doors, in which Thomas Dausgaard and the 38 players of the Swedish Chamber Orchestra together explore the Romantic symphonic repertoire. This project will include a complete Schumann Symphony cycle, of which this disc forms part. The first volume – which included the original version of Symphony No. 4 – was greeted with acclaim by the critics, receiving special recommendations from the German website Klassik Heute and from BBC Music Magazine. The website klassik. com gave the verdict ‘With this wonderful recording, Dausgaard and the Swedish Chamber Orchestra catapult into the very top of the list of excellent Schumann interpreters’, while the reviewer in Sunday Times (UK) deemed the playing to be ‘first-rate’ with ‘a real feeling for the emotional extremes that are at the heart of Schumann’s art.’