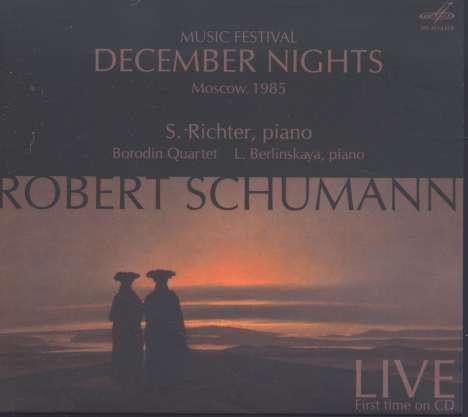 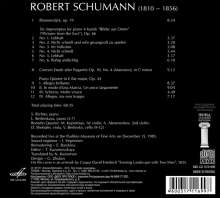 "The World of Romanticism" was a subtitle of the famous Svyatoslav Richter's music festival "December Nights". Its programme, as it was the organizers' intent, comprised compositions by Schubert, Schumann and Chopin. Ten day were devoted to the works of each of the composers.

In the beginning of the night which opened the ten days of Robert Schumann, Svyatoslav Richter presented the audience with a Viennese bouquet Blumenstück, Op. 19. That was what they used to call flower still life paintings in Germany (German die Blume stands for a flower, and das Stück – a thing) which were hugely popular in the 19th century. According to the author, that elegant piece appeared to be "variations with no theme" and should have been titled Garland. But later the title was replaced with Blumenstück. Schumann apparently borrowed the name from a novel by his literature idol and a favourite of German romaticists Johann Friedrich Richter (who wrote under the pen name Jean Paul) titled Blumen-, Frucht- und Dornenstücke oder Ehestand, Tod und Hochzeit des Armenadvokaten F. St. Siebenkäs, which is translated as "Extracts on Flowers, Fruits, Thorns, or Married Life, Death and Wedding of Poor Men's Lawyer Siebenkäs." The miniature was written in 1839 in Vienna, a year before Schumann married Clara Wieck, and along with the cycle Myrthen, Op. 25 for voice and piano, written in 1840 it became the composer's wedding present to his fiancée.

Six impromptus for piano 4-hands Bilder aus Osten ("Pictures from the East"), Op. 66, were composed by Robert Schumann in 1848 and inspired by the short stories of Friedrich Rückert based on the stories The Transformations of Abu Said of Serug by Al-Hariri. The six impromptus formed a single poem with a subject resembling the evangelical parable of the prodigal son. The last sixth impromptu of the cycle sounds repentant (Schumann makes a remark "Ruhig andächtig"), and the hero "ends his merry life in repentance and confession." This disc features the performance of Bilder aus Osten by Svyatoslav Richter and Lyudmila Berlinskaya.

Robert Schumann first turned to Paganini’s works in 1832 (Six Concert Etudes, Op. 3), and then in 1833 (Six Concert Etudes, Op. 10). To Schumann, Paganini’s caprices were examples of how virtuosic technical means of the instrument could be enriched therefore facilitating the formation of the genre of concert etude. In these compositions, Schumann is a true co-author of Paganini. Schumann’s transcriptions contain lots of additions to the violin original, lots of new melodically bright second parts, for instance, in a sublime and doleful etude No. 4 in C minor included in this album.

Schumann wrote Piano Quintet in E flat major, Op. 44, one of his best compositions, in the age of 32 and dedicated it to his wife, an outstanding pianist Clara Wieck. It is noteworthy that 1842 was 'the year of chamber music' for the composer. Apart from Quintet, he wrote three string quartets, a trio and a piano concerto. The first part of Allegro brillante begins with a resolute and energetic theme which is replaced with a more restrained and delicate one. In the dialogue between the cello and the viola that follows, the instruments pass a brief and melodious phrase to each other, which is later suddenly transforms into a torrent of vital force.

The main theme of the second part In modo d'una marcia is contemplative rather than narrative. It seems that the melody of a funeral procession played by the first violin puts questions of the mysteries of life and death. Its central section – a restless Agitato – is something of an emotional and psychological relaxation. The third part Scherzo with its two contrasting trios, the first of which is a lyrical canon led by the violin and viola, and the second one being a perpetual motion. The resplendent finale Allegro ma non troppo combines elements of both sonata form and rondo, and ends in a fugue built on the themes of the first and last parts of the quintet.