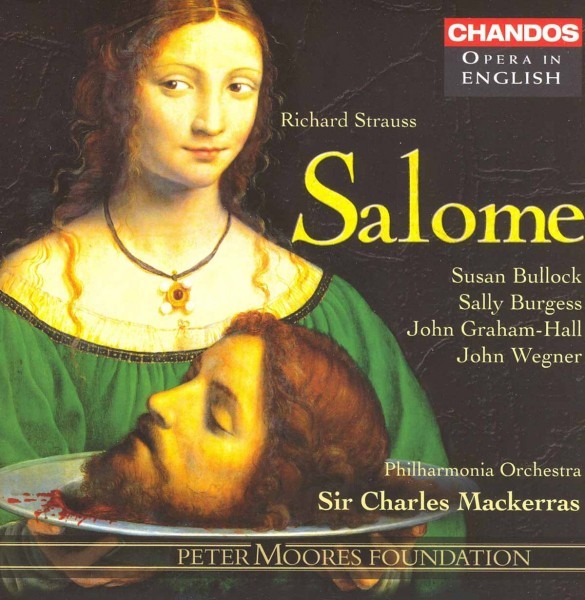 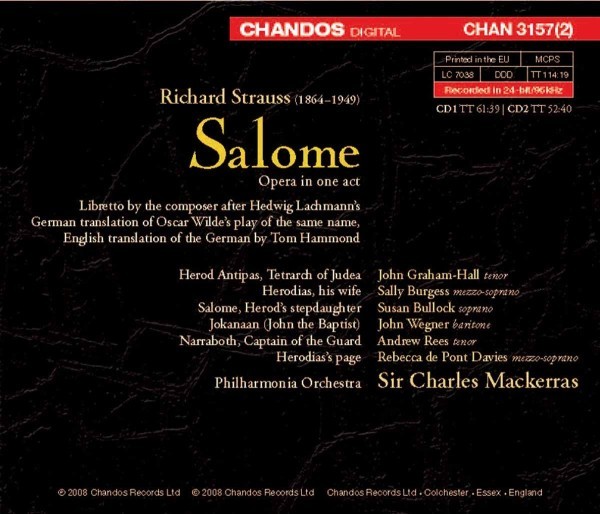 Richard Strauss is a composer for whom Sir Charles holds in deep affection. He explains “I’m just amazed that he could have written it [Salome]. Every page has something that hadn’t been done before, not even by Wagner. Bitonality, whole tone scales, everything! Endlessly varying the leitmotifs so that they take on different meaning… remarkable, and such a lesson in the use of the orchestra… it’s just superb… even if you have not heard a note of Strauss before you will be swept along by the power of the music.”

Susan Bullock has previously performed Salome in the concert format and her performances in the role of Strauss’s Elektra have brought her international acclaim. MusicWeb International wrote of her Salome “we were treated to a show-stealing dramatic performance in which her character’s complicated and confused emotions were plainly visible.”

Charles Mackerras does total justice to every episode of full-out, rapturous lyricism, but the performance also boasts just about enough savage intensity to satisfy those who enjoy the work only for its most febrile moments. Fortunately Mackerras’s notably elegant approach keeps something in reserve, with the build-up of tension in each scene always expertly judged… Mackerras coaxes from the Philharmonia a truly splendid cushion of sound to support the singers. International Record Review

Charles Mackerras is not usually mentioned when outstanding Strauss conductors are considered. But as this latest addition to Chandos’ Opera in English series shows, he is an outstanding Straussian, and it’s the Philharmonia’s gorgeously vivid playing of it, that makes this so memorable. That’s not to down grade any of the singers, who all get Tom Hammond’s no-nonsense English text across with enviable clarity The Guardian

The drama of this great opera is faithfully projected in this Peter Moores Opera in English recording by the inspired conducting of Sir Charles Mackerras and the Philharmonia, the excellent cast and the vivid Chandos sound. Above all it is good to have Susan Bullock in one of the major Strauss roles. The Sunday Telegraph

If it were only for the orchestra alone, this would now be the Salome of choice: never relentlessly feral but ineffably paced towards shocking climaxes, diaphanously clear, full of expressive orchestral solos (first violin especially) and naturally balanced in a recording which captures outlandish percussion touches like the tam-tam and timpani struck with triangle stick. One happily sits through this most sensuous of dances again when it follows the opera as an extra with its concert ending. BBC Music Magazine