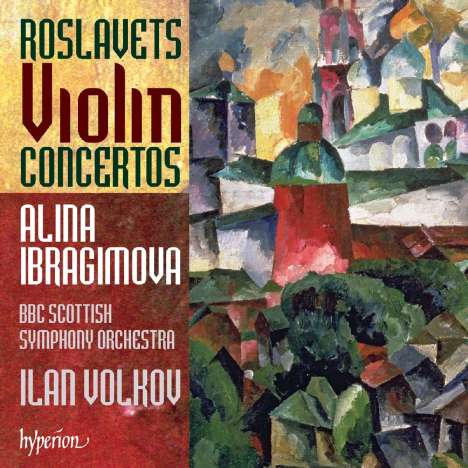 As late as 1982 Soviet musicologists claiming any significance for Nikolay Roslavets were vigorously suppressed. Only in 1990 was his unmarked grave identified. How many scores were lost when his flat was ransacked just after his death in 1944? The ruthless vengeance of a reactionary proletariat—branding Roslavets, himself born of peasant stock and a fervent 1917 revolutionary, a mere pedlar of bourgeois ‘art for art’s sake’—has fortunately now given way to a gradual recognition of the very real significance of this ‘Russian Schoenberg’. Hyperion has played an important part in the composer’s contemporary rehabilitation, with a benchmark recording of some orchestral works performed by Ilan Volkov and the BBC Scottish Symphony Orchestra. The same performers are joined here by the brilliant young violinist Alina Ibragimova.

Roslavets’s Violin Concerto No 1 was thought to exist only in piano reduction form until 1989 when the full score was unearthed in the archives of the State Music Publishers in Moscow. It is an ambitious work, laid out on a large scale. Roslavets’s mastery of a leaner symphonic idiom, virtuosic and elegant, is immediately apparent. It ranks as one of the most important Russian works of its era.

Violin Concerto No 2 was completed in 1936, and was written shortly after the composer’s remarkable Chamber Symphony of 1934–5 (recorded on Hyperion CDA67484). Thus it belongs to the period following Roslavets’s return to Moscow from Uzbekistan, when he seems to have been trying to re-establish his reputation as a composer of substantial works, but after the notorious Pravda denunciations of Shostakovich and musical modernism in January 1936 he probably felt it stood little chance of performance. Since then it has remained in total obscurity until very recently, and these notes were heard for the first time in Glasgow’s City Hall in January 2008—the performance on the present disc is in fact the world premiere.

'Both concertos are beautifully played by Alina Ibragimova, whose slightly wiry, deceptively fragile sound seems ideal for this music's ambiguities, with Volkov and his orchestra providing the perfect foil' (The Guardian)

'Both concertos are given superb, telling performances here by Alina Ibragimova and the BBC Scottish Symphony Orchestra and Ilan Volkov, on a disc that is valuable both historically and musically' (Daily Telegraph)

'Ibragimova plays like a dream, and Volkov and the BBC Scottish SO accompany superbly throughout. Simon Eadon's sound is first-rate. Anyone interested in rare 20th century repertoire need not hesitate' (Gramophone)

'Ibragimova has the bravura technique and coloristic range… she posses as elegance of tone… Volkov brings out tall the polyphonic strands with ease and leads a performance of striking color, power, and discipline. More eloquent advocates for Roslavets abilities would be hard to imagine' (Fanfare, USA)

The Age of the Russian Avant-Garde - Futurists and Traditionalists
8 CDs
EUR 39,99*