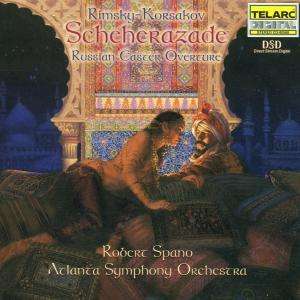 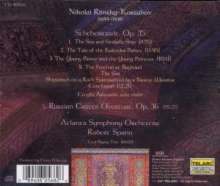 "The courtship may be over, but the love affair has only begun," raved The Atlanta Journal-Constitution in its review of Robert Spano’s opening concert with the ASO in May 2000. "...Robert Spano," it continued, "...encouraged his new partners to play with passion, style, and in the case of Rimsky-Korsakov’s Scheherazade, sheer spine-tingling, ear-ringing excitement." Telarc producers Elaine Martone and Robert Woods, in the audience for Spano’s first concert with the orchestra, were in wholehearted agreement with those sentiments. "It was magnificent," said Martone, extolling the sound of the orchestra and especially the work of its soloists. "The players really stepped out." She and Woods together persuaded Spano and the orchestra to make the work the subject of their first recording together for the label.

Spano needed little urging. "I love the piece, and it seemed the perfect vehicle to begin both my relationship with the orchestra and with Telarc," said the conductor. "It’s such a natural showcase for the orchestra and all of its talented principal players."

Rimsky-Korsakov composed both Scheherazade and the Russian Easter Overture in 1888. They were among the last major orchestral works he would compose. In his memoirs he conceded that they "close a period of my work, at the end of which my orchestration had attained a considerable degree of virtuosity and warm sonority." Scheherazade, a "Symphonie Suite" based on the tales of The Thousand and One Arabian Nights, is one of the most popular and widely performed works in the symphonic repertoire. The solo violin (here seductively played by prinicipal violinist Cecylia Arzewski) takes the part of the murderous Sultan’s young wife, weaving tale after tale through 1, 001 nights in order to avert her execution at her husband’s hands.

Robert Spano is the ASO’s fourth Music Director in its 57-year history. He officially assumes the ASO podium in the 2001-2002 season. Music Director of the Brooklyn Philharmonic since 1996, Mr. Spano is recognized as one of America’s outstanding conductors. He has conducted nearly every major North American orchestra, including the Boston Symphony, Chicago Symphony, The Cleveland Orchestra, Philadelphia Orchestra and the Los Angeles Philharmonic. A talented and sought-after opera conductor, he has conducted productions at the Lyric Opera Chicago, Houston Grand Opera, Royal Opera House Covent Garden and Santa Fe Opera. Deeply committed to music education, he became Director of the prestigious Conducting Fellowship Program at the Tanglewood Music Center in 1998 and has been on the faculty of the Oberlin Conservatory of Music since 1989.(concordmusicgroup. com)